.Theater: The perils of love

RVP’s ‘A Month in the Country’ answers catastrophe with comedy 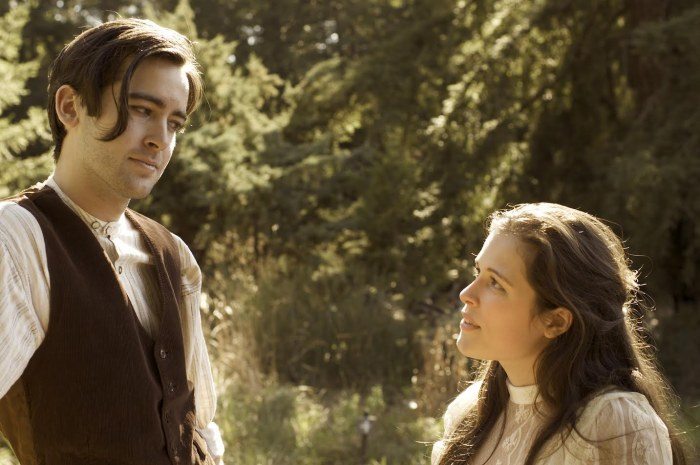 It all depends on expectations.

That’s my prediction of how audience members will feel when they exit The Barn Theatre after viewing Ross Valley Players’ current production of Ivan Turgenev’s classic 19th century comedy, A Month in the Country. If they accepted the widely held literary convention that the play strongly influenced Anton Chekhov’s series of self-styled “country comedies” that began to appear some 40 years later—and therefore was “Chekhovian” in tone—they probably will be disappointed. On the other hand, if they’re open to something quite different, Turgenev’s frothy dissertation on the perils of falling in love will be judged for what it is—a pleasant evening’s entertainment; no more, no less.

In my opinion, other than the fact that for both authors the action takes place on a rural Russian estate full of bored people who would rather be somewhere else, the comparison with Chekhov’s quintet of great plays is entirely spurious. Each of the latter contains references to pressing social, economic and political issues (the plight of the serfs, environmental degradation, threats to the aristocracy, etc.) then facing the nation. Equally important, Chekhov, a medical doctor himself, is at pains to explore the psychological motivation behind his characters’ sense of alienation.

Not so, Turgenev. Like Shakespeare in his lighter comedies and the librettos for Mozart and Rossini operas, he is content to ignore the outside world while skating along the surface of romantic relationships that often seem, in their absurdity, solely designed to elicit a comic response. Brien Friel’s 1992 adaptation that is being used by RVP for this production, with its contemporary idiom and typical Irish winks and nods, further adds to the feeling that the whole enterprise is being played for laughs.

That being the case, it’s easier to accept that director James Nelson has cast Shannon Veon Kase as Turgenev’s lively protagonist. Here’s the setup: It’s the 1840s, somewhere in the Russian hinterlands. Natalya Petrovna (Veon Kase) is the mistress of an estate owned by her considerably older husband, Arkady (Tom Hudgens)—a genial fellow, but not exactly a bedroom athlete. Bored to tears by the everyday routine, Natalya flirts outrageously with Mikhail Rakitin (Ben Ortega), a family friend who is smitten by her, and then falls madly in love with young Alexei Belyaev (Zach Stewart), who has come for “a month in the country,” tutoring her 6-year-old son. At first, unlikely as it may seem, Alexei returns her affections, but then complications arise when Natalya’s teenage foster-daughter Vera (Emily Ludlow) is also attracted to him.

How to choose, and what does this mean for other members of the household, all of whom have their own relationship issues to resolve?

Tension rises until the bright red walls of Ken Rowland’s handsome interior set can no longer contain it; there is a sudden burst—some residents leave, some stay—and the boring equilibrium is finally restored. Faced with finding 12 actors skilled enough to play period comedy (a real challenge for a community theater), director James Nelson was largely successful, particularly in the younger roles taken by Ben Ortega and Emily Ludlow, both of whom turn in well-grounded performances. More problematic is the casting of Veon Kase as Natalya. Make no mistake—with her booming voice and imposing physical presence, she’s a dominating figure on stage; but that can be both an asset and a distraction.

As he’s preparing to depart near the end of the play, Alexei ruefully observes, “All love is a catastrophe.” In the context of what we’ve just seen—and the bumpy real-life experience of the never-married Turgenev—it might be easy to agree.

Charles can be reached at [email protected]

Next ArticleLetter: ‘And I cannot believe it’s not on their conscience.’