.Buds in the Bunker

A million dollars in stolen weed. AR-15s and a man named No Name. What could go wrong? 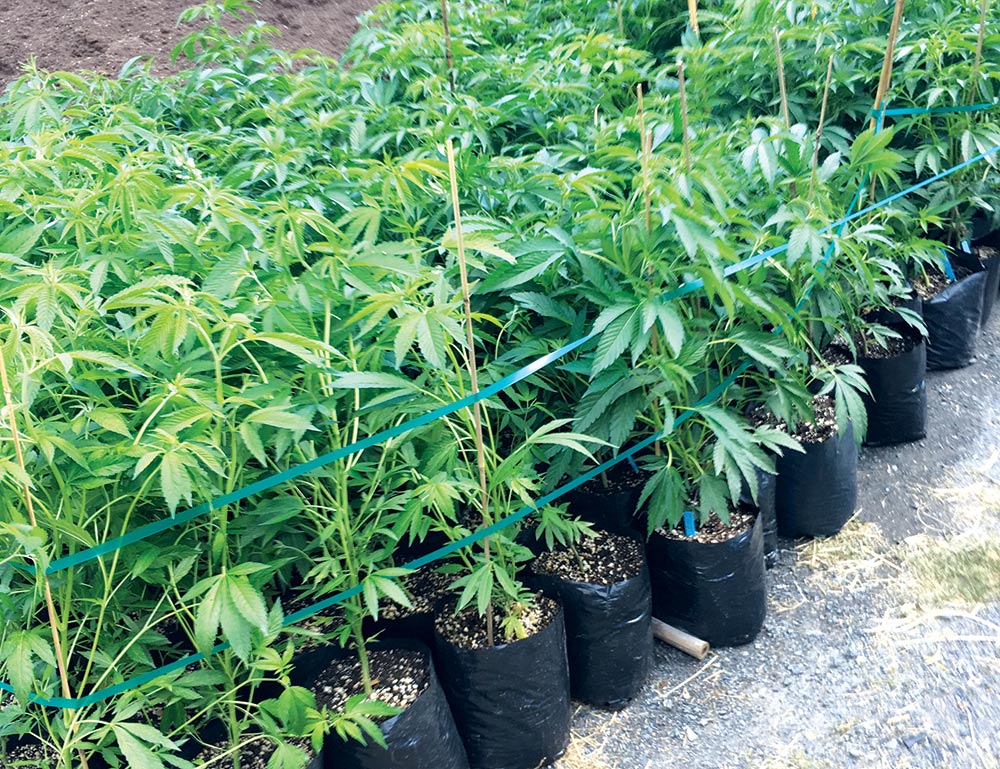 The setup: Detective Tioga Vignetta and her pal, a Yaqui who calls himself “No Name,” are tracking a stolen million-dollar marijuana crop. They catch up with the thieves in an old building where Latinas are drying and processing it. Tioga and No Name observe and leave, and Tioga calls the cops. No Name takes off.

The man who called himself “No Name” drove the speed limit along the highway, turned on the directional, stopped in the middle lane and pulled into the parking lot for Mono’s Tattoo parlor, where he killed the engine and removed the key from the ignition. Under the blue sky, he locked the car, and with Tioga close behind him, walked under the neon sign, then around the back of the building and into the thicket where he stopped, picked a wild blackberry berry and ate it. Even from outside they could smell the marijuana that had been cut down by the thieves and carted away under cover of darkness.

Tioga found a footbridge where they crossed the stream. No Name crouched down, danced across the bridge and walked along a deer path that led behind the bunker that had no windows on the ground floor and that looked like it might survive, Tioga thought, an assault by Navy Seals.

Mounds of dried dog shit littered the yard. Tioga knelt down, squeezed through the doggy door and then turned her head around and grabbed hold of the AR-15 that No Name handed her. He had a tougher time than she crawling through the door; his shirt ripped and he cut his ear.

Once inside, he was Mr. Tough Guy. “Not to worry,” he said and left Tioga to carry the canvas bag with the ammo, while he toted the AR-15. They entered a storage room with a rusted washing machine and a dryer that had been cannibalized for parts and then climbed a stairway that took them to a balcony.

Now the stink of marijuana assaulted Tioga. It made her want to sneeze and she didn’t think she could prevent herself from sneezing. No Name shook his head and placed two fingers across his lips. On hands and knees, an inch at a time, first No Name, and then Tioga, crawled along the carpet until they reached the edge of the balcony. It was a long way down to the ground floor below.

No Name lay down on his belly with the AR-15 at his side. Tioga peaked over the edge and saw a sea of marijuana plants hanging from the rafters. Fans whirled. Vents expelled the fumes that made her eyes sting.

Hawk, who was one of the thieves, stood in the far corner of the room with a cell phone in one hand and a clipboard in another. He wore a Borsalino, a Yin and Yang pendant and he broke into a rendition of Kid Rock’s “Early Mornin’ Stoned Pimp.” When he finished his performance, he grunted and moaned as though he was in pain, though he did not appear to be hurt or injured. Pablo—one of the workers—emerged from the upside down marijuana plants and applauded. “You da best. You da boss.”

Then he smacked a woman with dreadlocks. “Move it.”

Four women, all bare-breasted, barefoot and in cut-off jeans, moved between a row of upside down plants and pulled dead leaves from the stems. The floor was littered with them.

Hawk cracked a whip. “Hustle. We’re running out of time.” He walked across the length of the room, then stopped in the space directly under the balcony, where he began a conversation with someone whose voice Tioga could hear, but whose face she could not see.

A German shepherd tugged on its chain, barked and lunged toward the woman with the dreadlocks. Tioga felt an instant loathing for the dog. “I’ll shoot him if I have to,” she whispered.

A black spider crawled across No Name’s arm. Tioga watched the beast move one way and then the other, as though searching for a passageway to safety. With thumb and middle finger, she flicked it into the air and saw it land upside down, then right itself and vanish in the carpet.

Hawk was still talking to the invisible presence. “We fronted the dude 30 pounds,” he was saying. It was the same voice she had heard the day he first threw money at her in her office, as though money grew on a tree. Apparently it did, at least for him. The man under the balcony, whom she couldn’t see, uttered a stream of words that didn’t sound like English and that might have been Russian.

Hawk went on with his story. “The asshole rolls the truck, which is packed with weed. He steals a truck, picks up his load which has tumbled down the ravine and gets out of there like a bat out of hell.”

Then came another break in Hawk’s story while he listened to the man under the balcony, his words still unintelligible to Tioga. After an interval, Hawk picked up the thread of the story he had been telling. “In the Valley, the dude goes one way and the chingada cop goes the other way. The guy gets away! Isn’t that the dope! That’s us bro! We’re getting away with the million dollar crop and without a scratch.”

Hawk laughed; the man under the balcony laughed with him.

A slim taut body emerged from the shadows. The man stood in the light, removed the mask that had turned him into a wolf with a long snout and dark eyes.

The man shouted then placed the wolf mask over his face and howled wolf-like. He knew what he was doing. He had practiced, or maybe howling was innate; maybe he was a wolf man. He wore no shirt and no socks or shoes. He had the body of a surfer. A pair of faded jeans hung from his hips, along with a holster that boasted two guns. His body was covered with sweat; bright green marijuana leaves stuck to his arms, shoulders, chest and belly.

Tioga’s head pounded and her stomach heaved. She was going to puke. She felt like a little bird condemned to hover forever, never able to land on a branch or to nest in a tree. Then she looked down at the sea of green. The woman with dreadlocks stopped in the middle of a row of marijuana and put on a T-shirt that read “Guadalajara.”

Hawk stormed across the room and slapped her. She screamed and he slapped her again. “You’re not getting paid to cover your tits, bitch.” Hawk turned to the man with the surfer body who stood behind him. “Isn’t that right, Tomas!”

No Name held the AR-15 in his hands, his finger on the trigger.

“No, don’t,” Tioga whispered. “I don’t know, you don’t know, what these Zombie Devil men might do.” She looked at the watchdog and the woman with the dreadlocks. “I’m going to backtrack and call the police. I hate to involve them, but I don’t know what else to do. I need you to come with me and not do anything crazy.”

No Name’s nostrils flared. His face caught fire. “I don’t want to, but I will.”

He turned around and crawled across the floor on his belly, with the AR-15 in his hand and ready to come alive with a touch on his finger.

They went down the stairs, first Tioga, then No Name, out the doggy door and through the dried turds in the yard behind the bunker with the million dollar crop that the Zombie Devil men had ripped off.

In the thicket along the stream, Tioga stopped, picked a ripe blackberry and placed it on the tip of her tongue. It was as sweet as any jam she had ever tasted. Then, she and No Name followed the path that brought them back to the neon sign outside Mono’s Tattoo Parlor. Tioga looked back at the bunker. “That was my ex with the wolf mask. That was him howling. He stole howling from me and perverted it.”

No Name snickered. “Too late now for me to blow him away, though I wish I had.”

Tioga looked back at the bunker and wanted to howl. She opened her mouth wide and then couldn’t bring herself to do it.

Beneath the neon sign for Mono’s that flashed on and off, she sent Ambrose a text: “Marijuana thieves holed up in the old sausage factory in The Springs next to the tattoo parlor. There’s a shitload of weed. It’s the jackpot. But you gotta move fast, and bring all the fire power you’ve got.”

No Name stowed his AR-15 under the front seat of his white pickup truck. “If the cops are coming, I got to go. They’re looking for me.”

No Name sat behind the wheel and turned the key in the ignition. Tioga took out her cell, checked her messages and shook her head. “Nothing.”

In the distance, a siren wailed. The chief of police and his deputy would arrive with plenty of backup. Hawk and her ex would go down for the count, the women in the bunker would be set free, and the million dollar marijuana, well, it would be up for grabs.

No Name fastened his seat belt. “Are you coming with me or are you staying here?”

Tioga walked toward the thicket. “I don’t know.” Then, she raised her head, opened her mouth and howled. “Wait! I’m coming with you, No Name! The cops don’t need me. My ex will get everything that’s coming to him.”

Jonah Raskin is the author of the cannabis classic, “Marijuanaland: Dispatches from an American War,” and a regular contributor to the Pacific Sun.