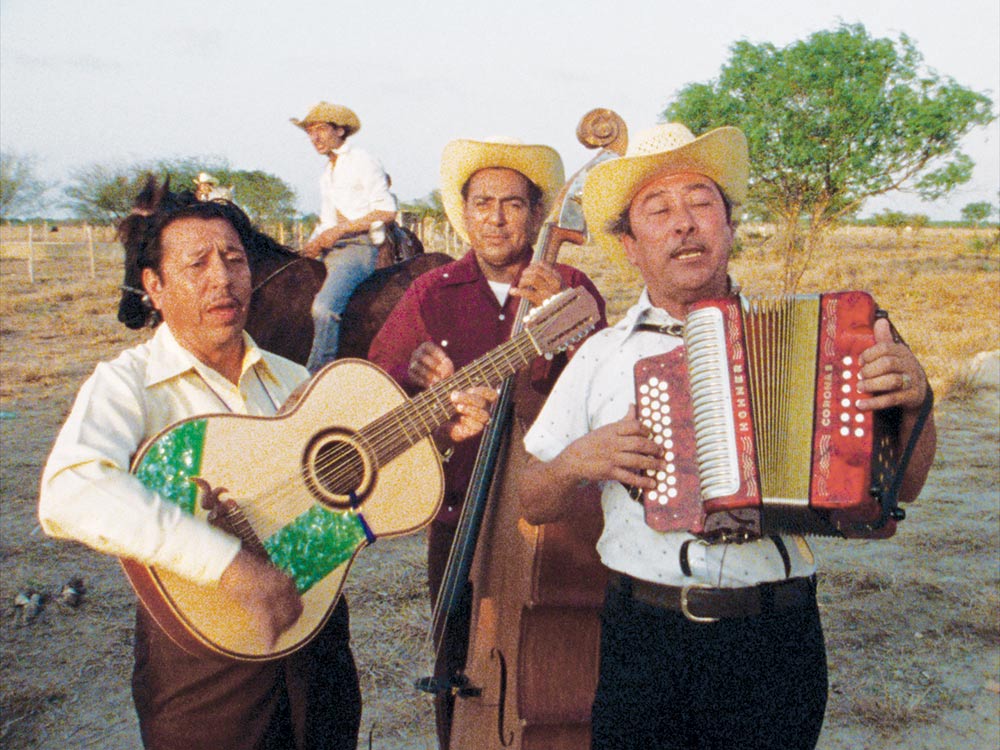 Classic doc on Mexican music screens with filmmakers on hand

The spice, sweetness and sadness of life is keener now in the 4K restoration of two of Les Blank’s documentaries, Chulas Fronteras (“Beloved [or beautiful] Borderlands” 1976), and the shorter follow up Del Mero Corazon (“Straight from the Heart” 1979). It’s part of the irreplaceable work of a trio of East Bay filmmakers: the late director Les Blank, co-director Chris Strachwitz and Maureen Gosling.

Strachwitz and Gosling will be on hand for a one-night-only show at Smith Rafael Film Center on Sept. 28.

These collaborators were the heirs to Alan Lomax and other song hunters who traveled from the swamps to the mountains. The trio worked on about a dozen films on ethnographic music, each one with a pulse, each one a treasure that preserved sounds being muscled out by monolithic American pop culture.

In this instance, even the records are artisanal. Chulas Fronteras offers a scene for vinyl fetishists, as a worker paddy-cakes up a lump of black plastic, pressing it like a tortilla in a tortilladora, using a chunk of automobile salvage as a counterweight, then trimming it and pasting on the label by hand.

Chulas Fronteras shows the team at their best, touring the Rio Grande Valley in the years before los narcos fouled it. The film gives eloquent translation to the lyrics of conjunto trios playing at events as formal as a 50th wedding anniversary and as colloquial as a backyard barbecue. They were there at the right time to film aging legends such as “Flaco” Jimenez, Lydia Mendoza and the one and only “Hurican del Valle,” Narciso Martinez. (Meanwhile, the film promoted musicians for a new audience, as Strachwitz reissued their work and sold it out of his Down Home Music store in fogbound El Cerrito.)

It’s always necessary to warn people to eat before seeing these films, or they’re unbearable. (Blank used to remedy this by setting up food events that paired with the screening.) Cuisine is always an element to the stories of local cultures, as here with Ms. Mendoza and her family pounding masa to make tamales. As a B-roll for a trio of musicians, a man mashes an avocado with the bottom of a lemon juice bottle to make guacamole for a standup dinner of mesquite-grilled chicken tacos. What one loves about Blank is that he never prettifies anything. The food porn is always deliciously funky—we even watch Mendoza’s family strip the meat from a steer’s toothy skull.

Despite the exuberance of the beat and the sadness of Mendoza’s lament for the man who used her and dropped her, Chulas Fronteras doesn’t neglect the political side of life. Key to this film is the problem of crossing a line that, as Octavio Paz wrote, is not a border, but a scar. This diaspora culture is shown in Grapes of Wrath-worthy detail. We hear El Pinguinos del Norte play their ballad about Cesar Chavez, against documentary footage of the all-ages stoop labor in the potato and onion patches. “The brutality of field work enslaves even the mind,” they sing.

The DJ at the Tamaulipas-based XEOR, whose show “Chulas Fronteras” gave the film its title, spins a 45-stanza corrido. It’s all about the beating the state police gave a pair of UFW labor organizers in 1967 at a strike of melon-pickers trying to get more than 25 cents an hour in wages. Who was it—Larry McMurtry?—who told the anti-joke: “Texas Rangers always have Mexican blood. On their boots.”

Like The River and the Wall, about the borderlands the current administration proposes to maim with their wasteful and stupid wall, Chulas Fronteras is a film we need now more than ever.

Richard Von Busack
Previous articleFlashback
Next articleBuds in the Bunker