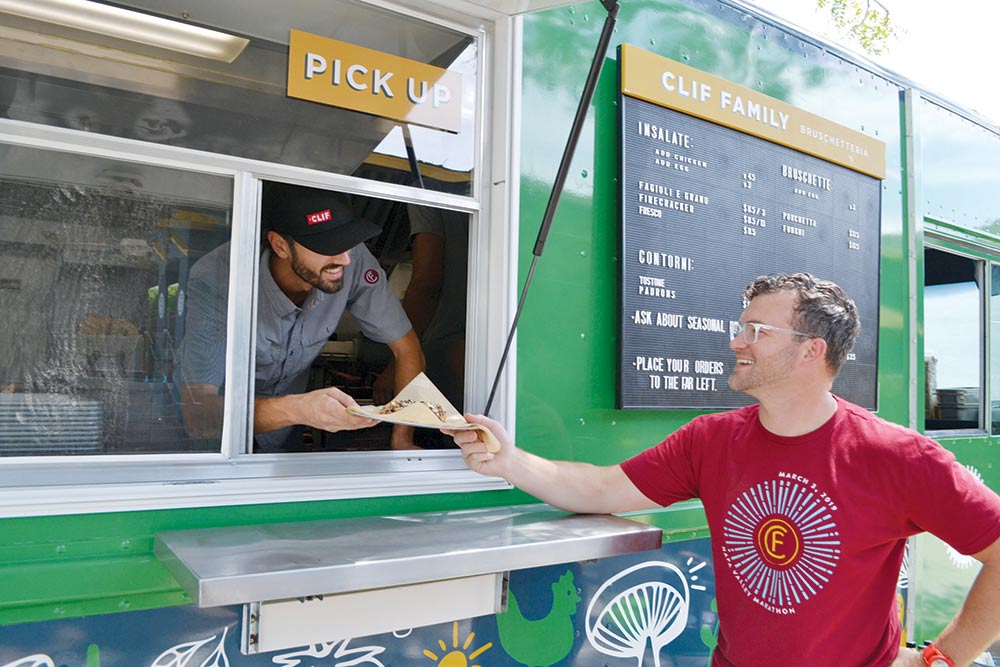 I know the press release is not supposed to be part of the story. But when I looked back at the emails I received about Clif Family Winery’s bruschetteria food truck and the invitations to sample, taste and dine there, and I compared them to the time it took me to actually get over there and sample said food-truck food, I had the nagging thought: how could this not be part of the story?

The story about press agents courting freelance food-and-wine writers isn’t exactly a gritty exposé of how the sausage is made. We’re a free-range lot, after all, and generally treated humanely, if not certified as such. But it generally boils down to offers of free food and wine in connection with something new and unique, in a world of similarly unique enterprises. Free food and wine—what’s the delay? The reality is that each offering’s utility must be weighed against its cost in gas to get there. And back. On a writer’s pay, that’s not being cheap—that’s triage.

So, I missed the Clif Family bruschetteria’s “celebratory media and industry launch party” in August, 2014. And in 2015, I couldn’t make it to the media lunch with the winemaker. And on it went. Was it bad timing, or was it my bias concerning the truck’s principle product, bruschetta? Isn’t that Italian for “pizza toast?”

Nothing against pizza toast, it’s quick and easy. Put your pasta sauce on your bread, sprinkle on the parm and we’re snacking good. All ya gotta do to get a little wine country flair is sub diced tomatoes and drizzle with olive oil—“extra vergine,” of course, which 60 Minutes has informed me is Italian for “super fraudulent,” or “somewhat adulterated,” depending on the dialect.

When Clif Family added a “Farm Feast” option to the menu at their St. Helena Velo Vino tasting room, it was a bit more enticing—more so than, say, “farm to toaster oven.” But, thankless wretch that I am, I didn’t bother to pop in for a nosh until I happened to pass through town one day around lunchtime. What a nosh I was in for.

I always like stopping in at the Clif Family Winery tasting room, just south of St. Helena’s downtown. They’re road cycling–positive, since cofounders Kit Crawford and Gary Erickson (founder of the Clif Bar snack food company) are big fans of the sport, and while the staff is generally prompt and professional, there’s also something a wee more endearingly wine-geeky and real about the young folks there than in some other valley locales.

Some useful facts about Farm Feast: The experience is priced at $75 per person, which seems high until you consider that if you’d lunched at a nearby restaurant instead, $75 would hardly net you a middling wine, let alone any grub. The Clif team starts your lunch slow and easy, with a pour of Sauvignon Blanc, followed by a rosé and an appetizer of arancini, and maybe dukkah—an herb and nut mix they seem particularly proud of. Then there’s a hearty, fresh fagioli e grano salad, which includes farro grain and garbanzo beans grown on Clif Family’s CCOF certified organic farm on Howell Mountain.

They had me at homegrown farro, but farm-to-table garbanzo beans? Who in hell, or more specifically, the world-famous Napa Valley wine region, grows, processes and then serves up house-sourced garbanzo beans—those chunky, wan legumes I’ve never witnessed very far from a tin can, and generally smelling as such? And, why?

Let’s be honest. A similarly situated row of Cabernet Sauvignon on Howell Mountain would probably net about 10 grand on the open market—or something like that. So what’s with the lowly chickpeas? Are the Clif folks putting me on here—flaunting their energy-bar-derived riches, and laughing all the way to the banca?

I wished to talk to the chef, to explain this outrage. Just about then, Clif Family’s affable Executive Chef John McConnell appeared to check on my progress. McConnell explained that the farm team has freedom to experiment, save seeds, collect obscure ingredients like fennel pollen—which is dusted on one of the dishes—and design seasonal, and harvest-specific, menus to match the produce—including vegetables, fruits and herbs—in peak ripeness at any specific time of the year. Crazy as it may sound, I have to say the garbanzos, although saved and dried from the previous harvest, were the best-tasting chickpeas I’ve ever encountered.

At last, the signature dish arrives; bruschette fungi, available à la carte at the truck for $14. It’s much, much more than a pizza toast, after all. Rich, savory and a meal by itself, it’s a fungi on wheels.

Previous ArticleBuds in the Bunker