Contemplations on a small-town parade in the Trump era 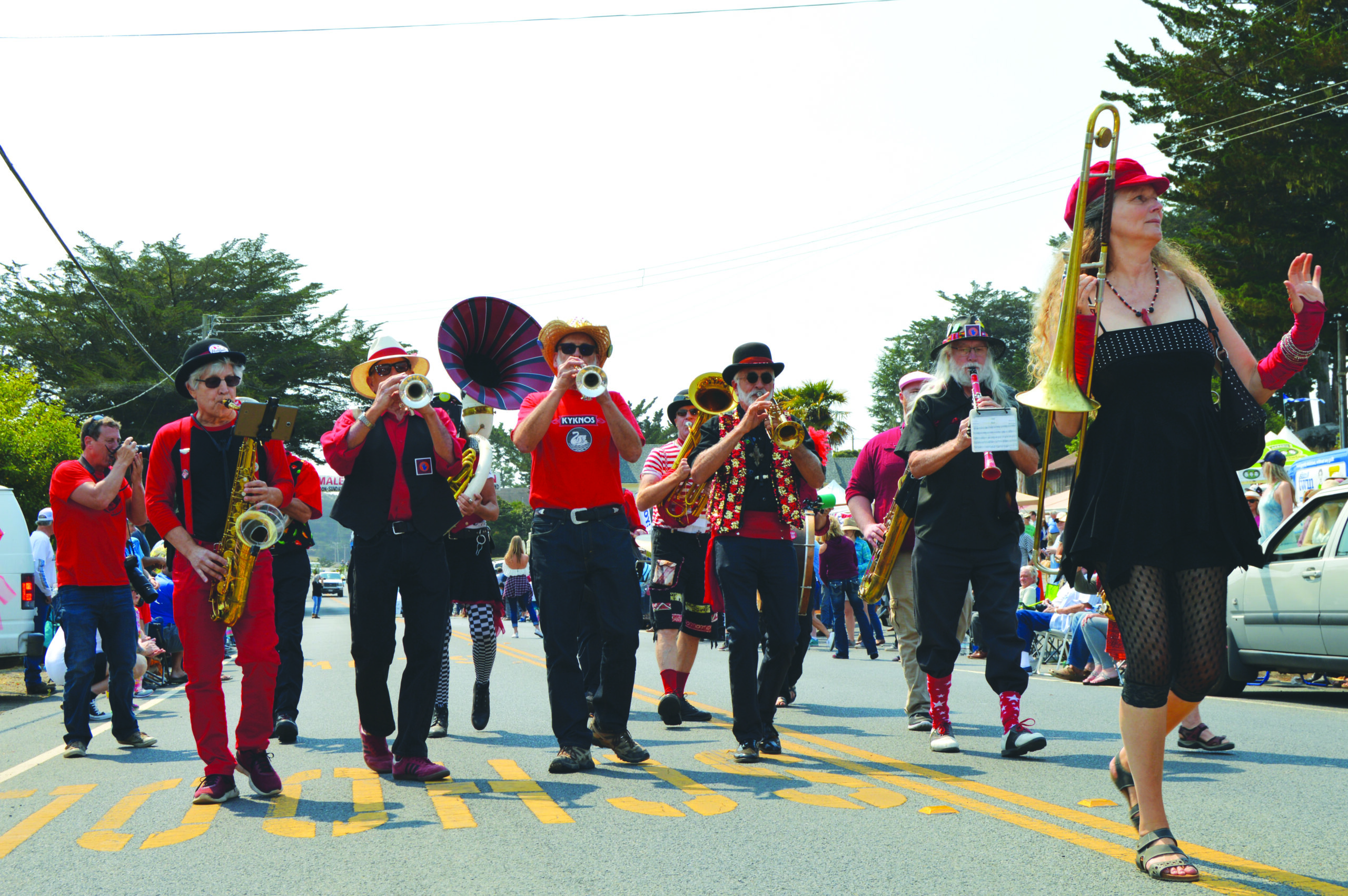 Theresa Byrne is resplendent in a pale purple ensemble, as the elder of West Marin takes in the annual Old California Festival & Founders Day Parade in Tomales making its way down the short, swooping section of Highway 1 that comprises Main Street.

Byrne says that as a “known Democrat” in these parts—she lives in nearby Dillon Beach—she’s keeping an eye peeled for “M.A.G.A.” hats or any other sartorial signifier that might infer, denote or otherwise show kinship with the strain of white nationalism that has come along with the advent of a divisive and angry reality-show president.

Byrne stands out in all purple, and her eyes are darting, ice-blue emeralds, but I’m more struck by how the predominant colors in this parade are black and red. Those colors, in and of themselves, are perhaps the most “martial” color combination there is; among other less controversial signifiers, red and black is the preferred color combo for American fascists—and also, I’ve discovered, of lots of American brass-band marching bands comprised of liberal white people.

The colors, in their own way, provide a squaring-off moment at the small-town celebration in West Marin on Sunday.  At first I was kind of taken aback by the cadres of bikers who showed up in the colors and bearing a Latinate name on their MC jackets and vests.

The local E Clampus Vitus branch is decked out in the black and red as they parade down Main Street, a gaggle of white dudes in varying degrees of red, white and black attire. What the heck is ECV, and who are these dudes? I shared with Byrne a kind of latent suspicion that, in the Trump era, flagrant yahoo-ism has been exalted as the highest order of patriotism.

Yet one should never pass judgment based on appearances, especially at a parade where you don’t know anyone and despite the outsized number of red hats among the ECV crew (though no actual “M.A.G.A.” hats were spotted).

Do a little research and it’s quickly obvious that the ECV organization dates back to the 1850s and was formed as a sort of tongue-in-cheek fraternal order to maintain and promote the history of the American West—especially the Gold Rush. The name is actually “dog latin,” in that it doesn’t mean anything. It’s gibberish.

Yet to the untrained eye, the organization’s members looks like they’re a bunch of bikers intent on squaring off against anti-fascists, or at least the presumptively liberal editorial board of the West Marin Review, as they too make their way past the cheering throngs of parade-goers.

Members of the Hubbub Club from Sebastopol and Graton are also in attendance, and are the highlight for me. They play “Iko Iko” and other parade-day standards during and after the parade. The all-white ensemble has been around since 2007 and describe themselves as a cross between a New Orleans brass band and a Fellini picture.

Today’s parade is, however, less Fellinesque than it is Altmanesque, as in Robert Altman—specifically his masterpiece of the early 1970s, Nashville, which tells the story of a town and its people as they grapple with the advent of a populist presidential contender. He’s coming to town, and not everyone’s happy about it.

I have to say that I was pretty amped up for a Trumpian display of rural American defiance. As I drove into town Sunday morning, the first vehicle I encountered in Tomales was a pickup truck with a huge flag hanging out the bed, which depicted a semi-automatic assault weapon and a challenge to anyone who would try to “take it away.” The truck appeared to be driven by a Hispanic dude, so go figure.

But the only visible weapons on display during the parade are the rifles carried by the color guard who precede the parade and are drawn from the local Coast Guard training station.

Everything’s different these days—citizens and journalists on the lookout for the local moment that encapsulates the larger national convulsion at hand. Only in 2018, for example, would anyone care to note the fact that nobody kneeled at the Tomales Founders Day Celebration when the crowd sings along to “The Star-Spangled Banner.”

Cowboy hats are placed over hearts as the murmur of the anthem emerges from crowds gathered on either side of Main Street to enjoy what the locals promote as the World’s Shortest Parade. It’s short, to be sure, but long on symbolism (or assumptions of symbolism).

Mostly, it’s just a fun parade day for locals. The William Tell House is swinging with early-afternoon action, and if there’s an open container law in Marin County, tell it to that guy in dusty jeans, suspenders and a concrete-company T-shirt swigging a jumbo can of Budweiser. Only in 2018 would it be notable to indicate that the smell of cannabis smoke does not, however, permeate the air in Tomales. This is a family-friendly day.

Tomales may be the most poignantly situated town in Marin County, given the arc of the larger political moment we’re in, and how people like Theresa Byrne are anxious to smoke out—or at least quietly identify—small-town American extremism on display. And there’s no time like a parade for residents of a town to let their particular freak flag fly.

Readers may recall that on the Fourth of July in 2016, the all-American city of Petaluma hosted its annual patriotic parade, only to discover that there were a bunch of white nationalists in the region eager to deploy Confederate flags and the new, visualized semiotics of Eurocentric orientation.

I’ve also reported on Christian right-wing signage that’s popped up along roads that traverse the dairy farms, which bleed the American flag into a cross—a common symbol among armies of the new American right.

As such, the small-town parade on Sunday, an annual affair much beloved by the small town (lots of money is raised for ongoing renovations at Town Hall), was also a moment to reflect on this abrasively divisive time in America and ask, how does this all end? What does it mean for small-town cultures strung along Highway 1 in West Marin, which all embrace tradition in their own way, while also embodying the best of what a truly progressive rural region would embody?

There’s nothing but dairy land surrounding Tomales and with that, an embrace of organizations such as the Marin Agricultural Land Trust, whose efforts have been critical in preserving the dairy culture and economy that animates West Marin.

Tomales has its share of tourist draws or reasons for a West Marinite to get in the car and check it out. Town Hall not only puts on regular open-mic poetry nights, it’s got a bar and recently hosted a concert by West Marin country cut-ups the Haggards that drew nearly 300 people.

All the various treats and treasures were on display Sunday, as the parade ended and the daylong party kicked in. Music was provided by the all-female Foxes in the Henhouse. K&A Take Away was there offering its locally drawn menu, which includes everything from sturdy Italian sausage sandwiches to quinoa-and-zucchini pancakes. Three Twins Ice cream, headquartered in Petaluma, was on hand on parade day too. Hog Island Oysters? Of course. The butter dripped from dawn till dusk.

It was also amusing that a visitor to town can buy a “Straight Outta Tomales” T-shirt—if one is cool with the cultural appropriation of an album recorded by N.W.A. in 1988, and whose full name is best left unsaid.

In reading up on the history of this fascinating and delightful small town, it’s no small symbolic matter that Tomales was built on the San Andreas Fault. The town’s old cemetery is the best example extant to show the damage done her by the 1906 earthquake, which destroyed San Francisco long before Google did. As recently as May of this year, the earth shook in Tomales when a 2.5 scale earthquake hit town.

When it was over, I got in the car for the drive back to Bolinas. The morning had given way to the afternoon, and so of course the lines at Hog Island and Nick & Tony’s were off the chain with day-trippers when I drove through Marshall.

There was another fun street festival in West Marin, on Monday, the annual Bolinas Labor Day blowout hosted by the community center (where I’m occasionally employed to help out with events).

One of my great pleasures in life is watching other people have fun, and there’s no place like Bo for unself-conscious expression. By contrast, and this is a strictly biased observation, Tomales was a little light in the department of public displays of joy. I’m sure those folks know how to let loose, too. Just maybe not early on a Sunday afternoon.

I sat in the middle of the street in Bolinas on Labor Day, directing traffic past the band and street celebrants, and thought about Theresa Byrne and her kind, ice-blue eyes as I reflected on her unapologetic passion for a multicultural Marin County.

I thought about those sorta-biker guys in Tomales and wondered how this all settles out, this whole Trump moment, when it’s over and small towns get on with the business of preserving themselves, not so much from alien interlopers, but from corporate power.