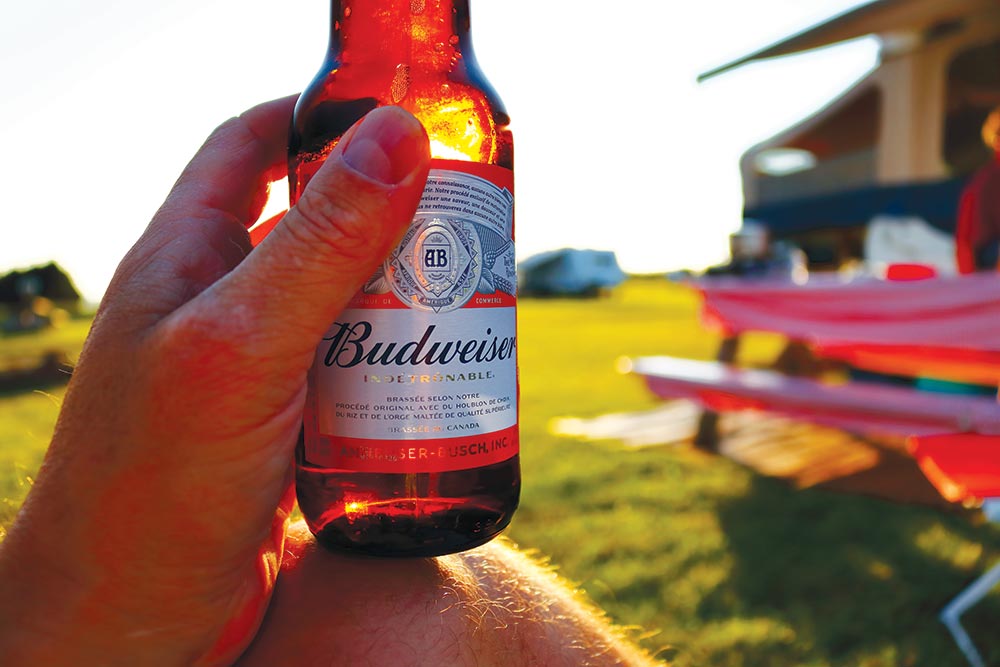 I’ve never understood the concept of a “guilty pleasure.” It’s a way of expressing one’s tastes while simultaneously apologizing for them. Taste is inherently subjective, so why let other people make you feel bad about yours? If your idea of fine art is a black-light poster, I say embrace it! If you have a thing for celebrity gossip, own it! If your favorite song is “Don’t Stop Believing,” don’t apologize for it. Play it louder.

So let me assure you that there’s no guilty pleasure involved when I say I like Budweiser. No hipster irony, either—Bud is not some sort of fermented, beechwood-aged proxy for a vintage Gulf gas station jacket, at least not for me (and I should know, because I happen to own a vintage Gulf gas station jacket). When I say I like Bud, it’s because I like Bud, sincerely and enthusiastically.

Yes, I know Budweiser is essentially a factory product. Yes, I know Bud’s corporate parent, InBev, is an evil leviathan. And yes, I know Bud is the default choice of lunkheads everywhere. Is Bud as good as my favorite beer, Samuel Smith Oatmeal Stout? No, of course not—but that’s a treat for special occasions. Bud is my everyday beer, and I vastly prefer it over most microbrews and craft beers.

Why? For starters, I tend to dislike bitter flavors. This means most hoppy beers, which comprise a disproportionate share of the craft market, are off-limits for me. Obviously, Bud doesn’t present this problem, as its hops quotient is notoriously mild.

Moreover, there are certain products—and beer is one of them—that I prefer to feel like I’m buying from adults, from grown-ups. When I see craft beers with cringe-inducing, pun-driven names any self-respecting person would be embarrassed to say out loud, like Hoptical Illusion and Baby Got Bock, and with label designs that lean heavily on cartoons and other pop-cultural totems, it all feels like kids playing dress-up. Save that stuff for the candy aisle. Say what you want about Bud, its brand presentation has generally stayed pretty classic, timeless and non-generational.

And that’s as it should be, because beer should be for everyone. So many of the craft beers feel like they’re trying to weed out the squares and/or the olds. Imagine your father shopping for beer and seeing a six-pack of Hoptimus Prime or Citra Ass Down—would he get the joke? Even if he did, he might reasonably conclude that this product was intended for someone else.

Beer should aim to unite, not to divide, which is another reason I like Bud. I like it the same way I like the Rolling Stones, or baseball, or Goodfellas, or a burger with fries—solid, mass-appeal products that make me feel connected to the rest of humanity, or at least America. In this era of increasingly fragmented, hyper-niche-driven subcultures (several of which I happily partake in), it’s nice to have something that makes me feel like I’m going wide instead of narrow.

Also: Most stores and bars carry it, it’s reasonably priced, it goes down easy, and the 5.0 percent ABV gives just the right buzz. So yeah, I like Bud. I’m drinking one right now, in fact. Unapologetically? Guilty as charged.

Paul Lukas is a staff writer at Sports Illustrated. He also runs the Uni Watch Blog, among lots of other projects.

Previous ArticleDo I Know You?