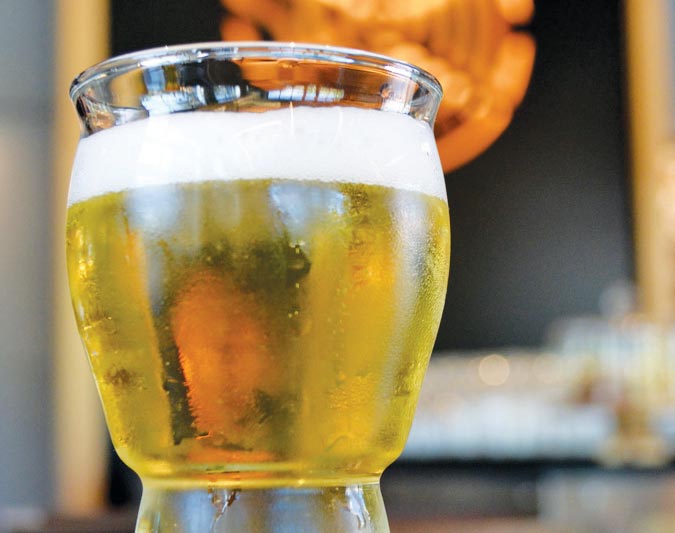 Forgive me for thinking there wasn’t much “there, there” in Novato’s craft beer scene, especially compared to its northern neighbors in Sonoma County, until I heard about some recent nanobrewery and taproom openings.

Venturing south of the border, I figure Beercraft is a good place to start an exploration of Marin County’s craft beer scene. It’s the southern outpost of a bottle shop and taproom that first opened in Rohnert Park in 2014 and is run by brothers JT Fenn and Matt Fenn. It’s already a bit more popular than its sibling, I’m told.

“I’ve never been in here when it’s only three people,” a regular remarks about this early afternoon’s light crowd. The taproom feels more neighborhood deli than bar, with its simple setup of cold case, counter and bright seating area with windows looking out on Redwood Avenue.

Non-beer drinkers are welcome, and will find cider on tap, plus French natural wine in a bottle. There’s always that person who says, “I only drink Coors,” says today’s bartender, Paul Hass; so Beercraft usually has a pilsner-style beer on tap to satisfy their palate.

Alas, Novato’s small brewing startups can’t fill out the 14-keg tap list on a regular basis. The one local selection today is Adobe Creek Brewing’s single hop Terp Sauce: Vic Secret, a crushed pink grapefruit of a hazy IPA, rind and all, maybe a little earthy orchard dust—I’m not saying I don’t love it! Sample 5-ounce pours are $4, and 12-ounce or full pints $7–$8.

Beercraft’s niche is in nabbing the newest releases—often one-shot brews—from California for the tap list, and from across the nation, in cans. Fenn told me previously how he might have only minutes, in today’s overheated craft beer market, to mull over carrying a distributor’s limited release.

I like a maltier style of IPA, but could spend an hour surveying the refrigerated IPA cans, which offer more artwork than info on the label. So I put the bartender’s expertise to work. Hass directs me to Surly Brewing Company’s Furious IPA, out of Minneapolis. Never heard of ’em, but the red-hued IPA, at only 6.7 percent alcohol by volume (ABV), is just what I ordered.

Among some more esoteric whisky-barrel aged stouts and quads, I spot an old favorite, Dragon’s Milk, from Michigan’s New Holland Brewing, now available in six-packs. But I pick up just one bottle—at 11 percent ABV, it’ll get me there.