At a meeting Wednesday, a state water board added San Antonio Creek to its list of 'impaired' water bodies. 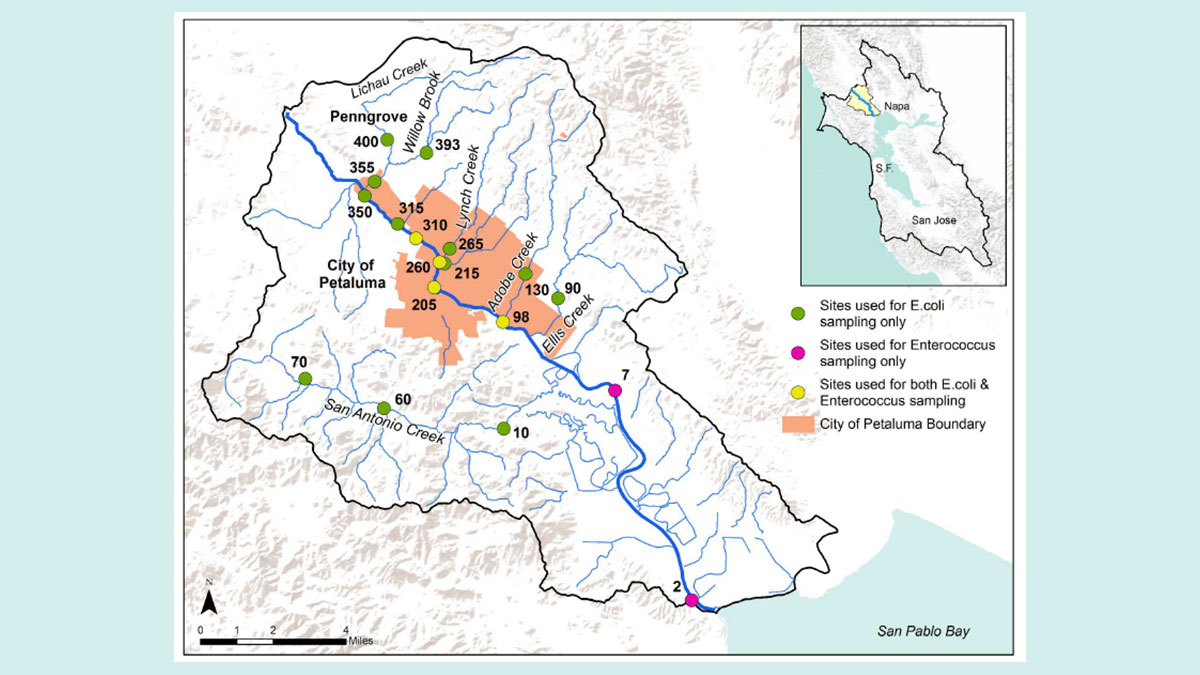 The board charged with overseeing the water quality in much of the San Francisco Bay Area unanimously approved a plan requiring local businesses, residents and government agencies to reduce the amount of fecal bacteria they put into the Petaluma River watershed, including San Antonio Creek.

At a meeting in Oakland on Wednesday, members of the San Francisco Bay Regional Water Quality Control Board voted unanimously to implement the plan, known as a Total Maximum Daily Load [TMDL].

As the Pacific Sun reported last week, the main stem Petaluma River has been considered ‘impaired’ due to excessive amounts of fecal bacteria since 1975.  Due to the boards decision today, San Antonio Creek, which runs along the border between Marin and Sonoma counties, is now formally considered ‘impaired,’ a federal designation that requires a state government to create a plan to clean up the water body. [Crappy Creek, Nov. 6]

In tests conducted between 2015 and 2018, water board scientists found bacteria tied to humans, horses, cows and dogs throughout the Petaluma River and its tributaries.

“The testing we did as part of this TMDL development showed that the bacteria levels in all tributaries, including San Antonio Creek, were well above the impairment threshold level,” Farhad Ghodrati, an environmental scientist working for the water board, told the Pacific Sun.

In a letter to the water board, staff from San Francisco Baykeeper, an environmental nonprofit, stated that the board’s proposal “broadly represents a status quo approach with little to no consequence for non-compliance.” Baykeeper’s letter criticizes the water board’s plan for failing to identify how much different bacteria sources are contributing to the river’s problems.

Without identifying which sources are most prevalent it will be difficult for the water board to prioritize which problem to tackle first, Ben Eichenberg, a staff attorney with Baykeeper, told the board Wednesday.

“The (current plan) simply says ‘everything is the problem,’” Eichenberg said.

In a written response to Baykeeper’s letter, water board staff repeatedly state that they “disagree” with the environmental group’s assessment of their plan. Baykeeper’s Eichenberg told the board Wednesday that the board’s response had not solved Baykeeper’s concerns about the TMDL plan.

The board instructed staff to continue sharing water test data with Baykeeper and other concerned groups but did not amend the plan before approving it.

In comment letters, several North Bay groups, including the North Bay Realtors Association and the Sonoma County Farm Bureau, pushed in the other direction, asking the board to extend the amount of time the board allows various groups to comply with new rules.

“We agree there needs to be a way to monitor and improve water quality in the Petaluma River; however, the imposed action steps enacted to get to a level of acceptable water quality needs to be affordable, unencumbered by regulatory overreach and fair to all local agencies and property owners involved,” Jeff Carlton, president of the Sonoma County Farm Bureau, wrote to the board on September 2.

In a separate letter, the North Bay Association of Realtors suggested that the board increase the time for compliance for homeowners with septic systems from ten to 15 years. The realtors group also suggested delaying the compliance requirement until a public source of funding for upgrades and test is available to homeowners.

In their response, water board staff noted that they had extended the compliance timeline from ten to 12 years. While no public funding for septic tank inspections currently exists, water board staff say they are “exploring options for offering financial support to low-income property owners.”

Water board staff will test the bacteria levels across the entire Petaluma River Watershed once every five years to determine whether levels of bacteria have been sufficiently lowered. Local government agencies charged with making changes will test parts of the watershed more frequently, according to water board staff.

Next ArticleTake the Baton