Fairfax filmmaker looks into the two-wheeled revolution of cargo bikes 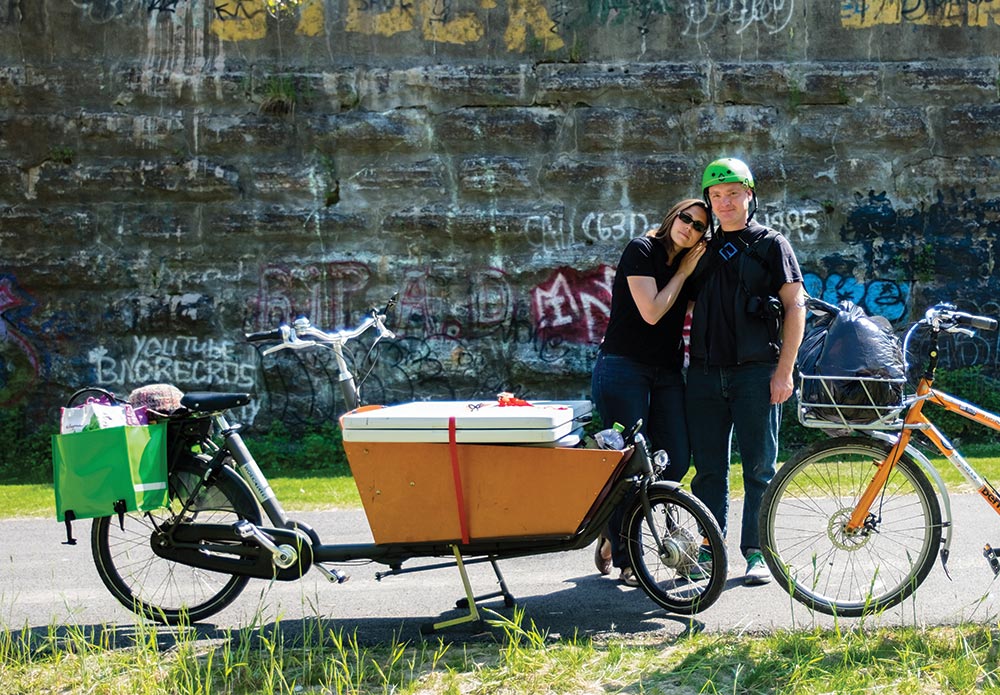 For Liz Canning, bicycles were a way of life. The Fairfax-based film editor once used her bike for everything, even commuting to the city, but when she had twins in 2008, her bike was replaced by a minivan. “I suddenly couldn’t ride my bike, and I hadn’t ever been a driver,” says Canning.

Feeling trapped by her dependence on cars and fossil fuels, Canning looked into family bikes and discovered the cargo bike.

First introduced in Denmark and now popular in Europe and elsewhere, cargo bikes are designed to transport heavy loads with either front or back units attached to the bike. Additionally, electric assist bikes help riders carry the load up hills or long distances.

“I discovered people all over not only using cargo bikes, but getting really excited about it,” Canning says. After ordering a cargo bike from a shop located in Portland, Ore., in 2011, her life changed. “Suddenly, getting around was actually fun,” she says. “I thought, this is really accessible, this could go mainstream.”

Canning took on the cargo bike as the subject of her debut documentary and crowdsourced the project to gather footage from those around the world who use cargo bikes in their life.

After several years of compiling the film, Canning released Motherload this past April, and the film recently screened at the Smith Rafael Film Center. It’s also set to screen at several film festivals later this year, and anyone can host a screening by purchasing a community screening package.

In the film, Canning introduces audiences to characters like Buffalo, N.Y.-based couple Brent Patterson and Stacy Bisker (pictured), who were struggling to pay off student loans and medical bills when they traded in their car for a cargo bike to save money. The couple were surprised by the joy they felt performing everyday tasks like grocery shopping, simply due to riding the bike.

Another figure in the film is Portland-based, mother-of-six Emily Finch, who peddled a 500-pound bike with six kids in tow and became a minor celebrity in town. That celebrity-status came with backlash, and the film looks into the way American stigmas continue to push back against bikes in favor of cars.

Motherload also turns the clock back to look at the role bicycles historically played as tools for social revolution. Bikes have empowered the poor for over a hundred years and were used as tools to network and protest during movements—like women’s suffrage—of the early 20th century.

Today, bikes continue to offer a way to disconnect from the financial strain of automobiles and to empower a cultural shift away from pollution and its effects on climate change.

“The main thing that inspired me to make this film and go about it the way that I did, is that once people give this lifestyle a try, they are overwhelmed by what it does for their life,” Canning says. “What they discover in their community, what they discover about their need to move their body, to feel the wind in their hair and the sun on their face—it’s really transformational.”

‘Motherload’ is playing in limited release. Host a screening by signing up at motherloadmovie.com.