It’s all grist for the mill at Mad Fritz Brewing Co. 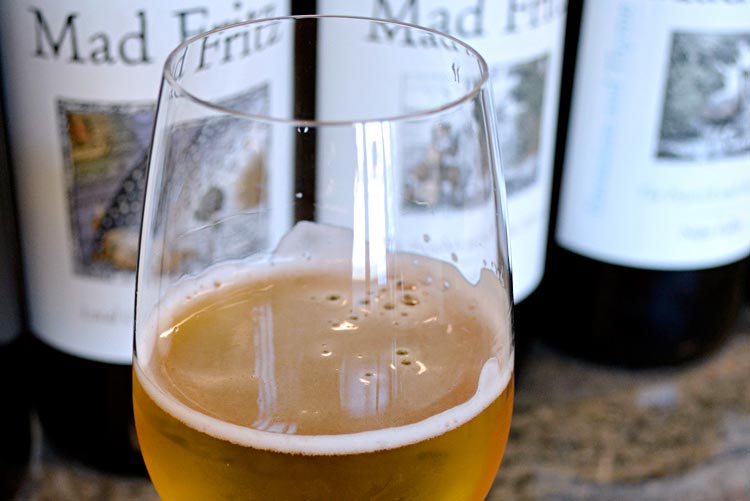 You may know the story about the fox and the grapes. In a nutshell: fox can’t get grapes, so fox disparages grapes as sour. Fewer know the one about the firkin and the mill.

Mad Fritz Brewing Company’s eclectic label designs depict scenes from Aesop’s Fables, such as the story about the fox and the grapes, as re-imagined in a series of 17th century prints. Bohemian readers liked them so much, they voted Mad Fritz “best beer label in Napa” in the 2019 Reader’s Poll. But there’s more to the story than a pretty picture.

Brewer Nile Zacherle has been working toward the ideal of making a beer of true terroir, or as he calls it, “origin beer,” since he founded the brewery in St. Helena a half decade ago. That means the hops are, increasingly, locally sourced, and the barley, if it’s not from a small, Colorado or Pacific Northwest farm-and-malt house, may even be grown in Napa Valley.

Does it make a difference? Of course it does. “I like to say, our beers are for the beer nerd,” Zacherle says, quickly adding, “You don’t have to be. But this is a deep dive into beer nerdom.”

Zacherle recently opened a tiny tap room in St. Helena behind the Clif Family Velo Vino tasting room on Highway 29 south of town. It’s pretty spare, equipped mainly with beer and record albums. “We’re all about the beer and the vinyl,” says Zacherle.

You like IPA, they’ve got IPA: Oast House IPA is made with Columbus hops. Everything here is cask-conditioned, like a home brew, meaning the secondary fermentation—which adds bubbles—happens in the bottle or the keg. There’s a big, fresh, citrusy aroma of Meyer lemon here.

This August, Mad Fritz marks its fifth anniversary with a one-of-a-kind, catered beer fest, that a dozen or so other breweries and wineries will help celebrate. A quick look at the lineup reveals it’s smaller, yet deeper, than your average beer fest—check out Logsdon Farmhouse Ales, for one. The event benefits the Bale Grist Mill, where Zacherle grinds his blue corn.

The Larks in the Corn pale ale has an aroma reminiscent of fresh-cooked tortilla, for sure, and although it’s barrel aged, like all Mad Fritz beers, it’s absolutely fox friendly—that is, it isn’t a “sour” at all.