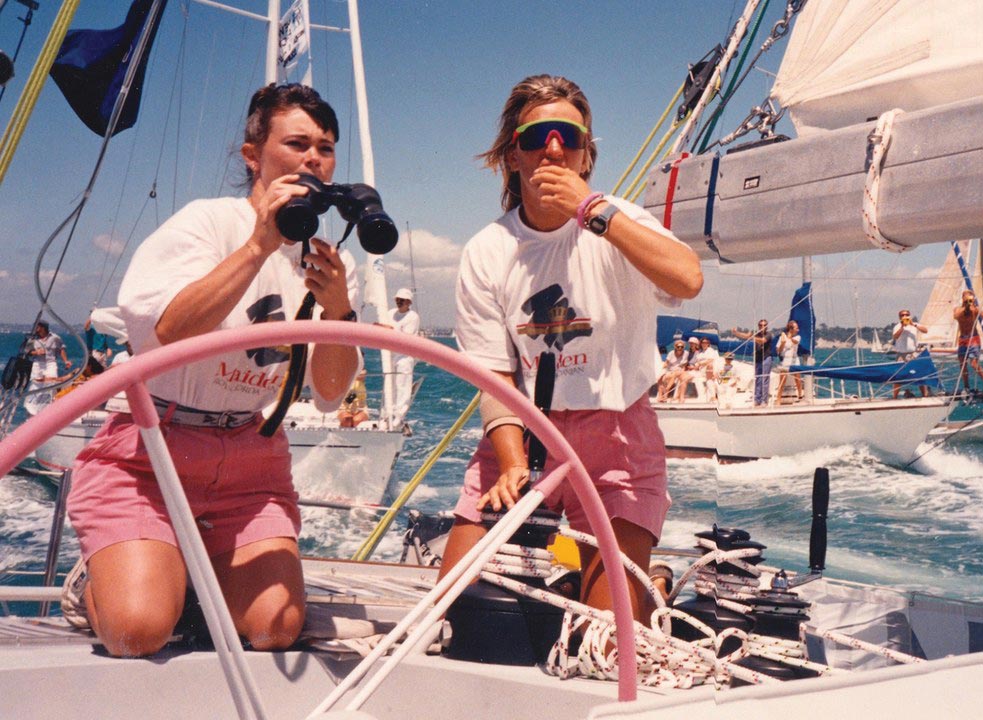 Maiden, a documentary about the first all-female yacht crew to participate in the Whitbread Race in 1989-90, dwells upon the emotional state of the captain. The camera stays with the Maiden’s captain, Tracy Edwards, now 56. The tears come, as she tries to compose herself. She apologizes, tells the director she really promised herself she wouldn’t break down. This movie tries to make you cry.

And, it often succeeds.

The race is a serious undertaking: 167 days long and 30,000 nautical miles, in 6 stages. It begins with a stretch from England to the coast of Uruguay. Then, the racing yachts round the Cape of Good Hope, skirt the icebergs off Antarctica’s coast—taking advantage of the speed granted by the gales of the “Roaring Forties”—and arrive in Freemantle, Western Australia. From there, they sail to New Zealand. Then around Cape Horn, then north to Ft. Lauderdale and back to England.

The vastness of this trip is equal to the vast condescension Edwards and her team faced. In her early days as a yachtsperson, Edwards found neither a position on a crew, nor support for her dream of sailing on her own. “Girls are for when you get into port,” one yachtsman assured her. The rank sexism even included the media covering the race. (The Guardian’s Bob Fisher referred to the Maiden, in print, as “a tin full of tarts.”)

It’s as if the boating community was 30 years behind the times, even in 1989. Count the number of times you hear Edwards told to “smile” by a photographer. See her referred to as “a slip of a girl” by her contemporaries. Witness the number of times someone talks to her like they want to pat her on her little head. One marvels at the legions of men out there who really want to grind a proud woman down.

There’s a particularly affecting moment during the Maiden’s poor performance in the New Zealand-to-Florida leg (caused by a leak in the boat off the coast of Argentina—serious enough that the Maiden had an RAF rescue plane on standby from the Falklands). To deflect attention from their late arrival, the ladies decided to sail into harbor in Florida wearing skimpy bathing suits, a gesture Edwards has regretted for 30 years.

Director Alex Holmes’ film is very clear on what Edwards was trying to prove and how hard she worked to prove it. Home movies and primitive video demonstrate the vastness and loneliness of the sea. The trip was an exercise in sleep deprivation, with four hours on watch, four hours off. And, as Edwards says repeatedly, “The ocean is always trying to kill you. It never takes a break.”

The problem with Maiden is something handled more deftly in The Raft, a documentary about a transatlantic voyage with a mostly female crew which was conducted as a peculiar psychological experiment. In Maiden, we don’t get a sense of the friction onboard, nor the technical requirements of such a voyage, nor of the boat itself. The focus is on Edwards (a life coach these days). The loss of her father ended an idyllic British childhood. Her mother married again, to a vicious drunk. The young girl dropped out of school, ran away to Greece and drifted into the sailor’s life. We see what she was trying to overcome.

What we don’t have are good anecdotes about what it takes to be a sea cook—we only get occasional references, such as a passing note about smelling land after weeks at sea, and diplomatically understated English intimations of the strife aboard the boat. We don’t even learn if a subsequent team of women ever tried the Whitbread race. Stirring as Maiden is, it lacks all the Melvilleian tidbits that make for a detailed picture of a sea voyage.

‘Maiden’ is playing in limited release.

Hold the Toke—Taking a pass on passing a smoke