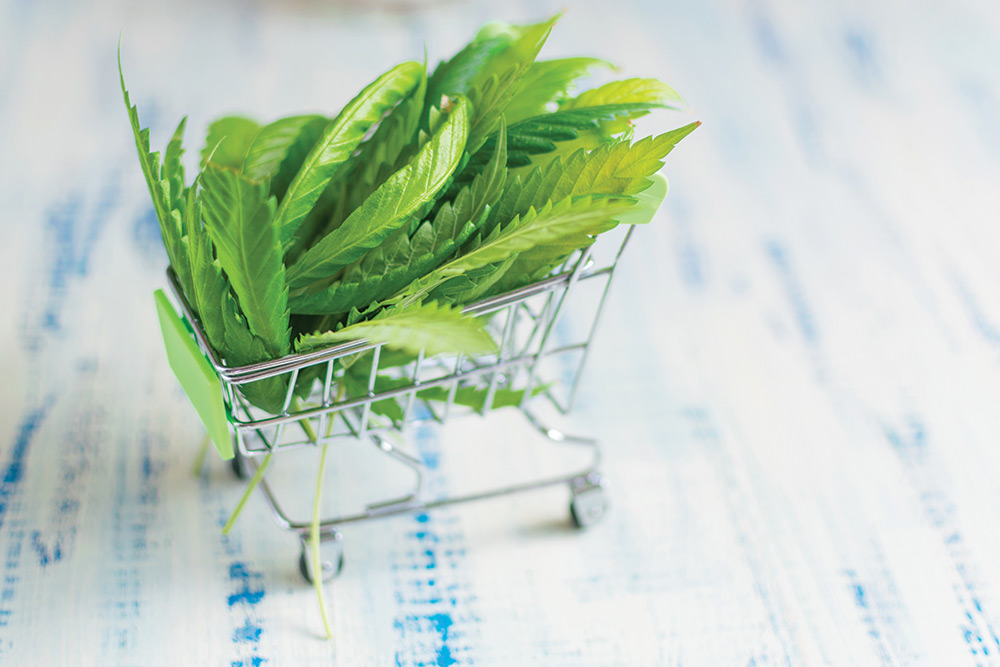 If Ting’s AB 1356 passes, it would force cities and counties to allow one cannabis retail permit for every four liquor licenses in the jurisdiction.

That is, only if more than half of the electorate in a jurisdiction voted for Proposition 64’s adult-use legalization in 2016.

For cities that already allow recreational sales, like Santa Rosa, Ting’s bill wouldn’t make much of a difference. But jurisdictions whose elected officials have banned retail recreational cannabis sales despite majority support from residents—including Fairfax and Marin County’s unincorporated areas—could be in for a ride. Some 75 percent of all cities and counties have banned retail pot business, according to state research highlighted by Ting. His bill aims to reverse the trend.

“Californians voted for Prop. 64 to replace the illicit market with a legal system that would grant Californians safe access to cannabis products, while also creating good jobs and significant tax revenue,” Ting said in announcing his bill. “However, these goals can only be fully realized if enough licenses are granted to meet existing demand. This bill will ensure the legal market can succeed.”

His bill is supported by labor organizations and veteran’s groups that have called for expanded access to medical cannabis. Ting’s bill passed the Senate Business and Professions committee on April 29 and is headed to the appropriations committee later this month.

“Despite voters approving Prop. 64, there are cannabis deserts across the state where veterans and patients have to drive long distances to a licensed shop,” said Aaron Augustis, founder of Veterans Cannabis Group, in response to Ting’s bill. “We served our country and want to work with our local cities, counties, and state governments to ensure our veterans have safe access across the state to medicinal cannabis. AB 1356 is crucial for veterans’ access.” To the south, the local pro-weed advocates at the Silicon Valley Cannabis Alliance have come out in support of AB 1356.

Locally, Shivawn Brady, a member of the Sonoma County Advisory Board and a board member at the Sonoma County Grower’s Alliance (whose crops often find their way to Marin’s medical and recreational community) says she personally supports Ting’s effort to nudge municipalities’ participation in the cannabis economy, especially as it benefits local medical-cannabis users who might otherwise have to leave their town or county to get the medicine. “This bill has the potential to serve those folks that are under-represented,” including the disabled, working class people, and veterans who rely on medical cannabis.

Ting’s bill would require that cities and counties to issue cannabis equal to 25 percent of the number of liquor store licenses in the jurisdiction—a reasonable ratio, says Brady—or one license for every 10,000 residents. Organizations including Urban Counties of California have cast a wary eye, saying it would “force local jurisdictions to approve licenses for medical and recreational cannabis retailers.”

The bill applies to jurisdictions that approved Prop 64. In Napa the vote was 37,000 for, 23,333 against. Napa has issued a handful of cannabis licenses since legalization.

In Marin County, an overwhelming 96,000 residents supported Prop 64 while 43,200 voted it down. But, with the exception of San Rafael, Marin towns and cities from Novato to Fairfax have rolling moratoriums banning non-medical cannabis retail establishments. Nearly 140,000

Sonomans supported legalization, with 94,500 against. Sonoma’s cannabis rollout has been stymied by residents’ pushback to commercial grows and other cannabis businesses in their midst—and a complicated, expensive and time-consuming licensing protocol that has conspired to keep black market sales at about 60 percent of pot sales statewide, according to industry estimates.

The Marin County supervisors have enacted a delivery-only adult-cannabis regime to the unincorporated areas. They’ve selected four companies as its go-to delivery selections—Buttercup & Spring, Elite Herbs, Inc, Express2You, Inc., and Mohave Distribution—but still hasn’t given them the green light to start delivering. (The county already has a longstanding medical-cannabis delivery apparatus in place.) The county says it has no intention of opening the local retail economy to recreational storefront sales, which may put it at odds with the Ting bill, should it pass.

Recreational storefronts are not happening in San Rafael, either, even as Ting’s bill makes it way through committee. On March 4 the San Rafael city council amended its medical-cannabis policy to allow existing licensees “the ability to serve the adult-use market,” but the new rules don’t permit new storefront cannabis retail in San Rafael. According to the city, four licenses will be issued for cannabis testing labs; two for infused product manufacturing; five for non-storefront deliver; and three for distribution.

Novato remains under a cannabis moratorium. On May 6 the planning commission held a workshop to review a draft proposal to regulate and tax commercial weed facilities in the city, which are currently banned. A draft ordinance is under consideration that would regulate the size, number and location of commercial cannabis activity allowed in town. Like many jurisdictions around the state, the city enacted a moratorium on pot businesses following legalization; it was extended to November 14.

And, even as Fairfax can lay claim to Marin County’s only storefront cannabis shop—the Marin Alliance for Medical Marijuana—the pot for sale there is not available over-the-counter to recreational users. The town recently voted to let the alliance deliver to non-medical consumers in Fairfax. The town is also under an ongoing cannabis moratorium and town leaders, are examining the potentials and pitfalls of, for example, allowing cannabis microbusinesses in town. Those are small, vertically organized pot businesses where the weed is cultivated, processed, and sold on-premises.

By any account, it looked like a pretty busy day in early May at Xavier Becerra’s office. The state attorney general pushed out four press releases on May 2, mostly directed at holding Washington D.C. accountable—but also at police accountability in the state.

In one announcement, Becerra denounced President Donald Trump’s rollback of offshore drilling rules that came about after the 2010 Deepwater Horizon disaster in the Gulf of Mexico.

He also stood ready to defend Californians against Trump’s “faith-based” refusal-of-care announcement at the National Prayer Breakfast this week, that will, Becerra charged, “allow broad, sweeping refusals of care based on religious or moral objections, even in emergency circumstances.”

The AG further announced that California, leading a coalition of 20 states, had filed a reply brief to Trump’s challenge to their lawsuit, California et. al. v Trump, et al., over the president’s national emergency declaration at the southern border. The fourth release didn’t directly criticize Trump—though it could have, given the president’s public embrace of racial profiling—as Becerra announced a new video to help enhance public buy-in of an ambitious police-accountability law.

In 2015, the state of California passed the Racial and Identity Profiling Act, (AB 953), a first-in-the-nation law which requires, by 2023, that all law enforcement agencies across the state collect detailed information and recordings of stops and searches, including data on the officers’ perception of the person being stopped, in order to combat “policing profiling” of suspects. But earlier this year, the board that was created with the passage of RIPA released a report that found very little evidence of racial profiling in California in 2017.

The California Racial and Identity Profiling Advisory Board was created to “shepherd this data collection and provide public reports with the ultimate objective to eliminate racial and identity profiling and improve and understand diversity in law enforcement through training, education, and outreach.”

Of the 453 agencies subject to RIPA reporting in 2017, 79 said they had no civilian complaints reported that year. The RIPA board was split on what the data meant: For some law enforcement representatives it meant that there wasn’t much of a racial profiling crisis in California. For police-accountability advocates, it meant that the data-collection process under RIPA was either flawed or corrupted by the police “blue wall,” or both.

As it reported a low number of civilian complaints in its 2017 study, the board addressed a possible absence of public buy-in in RIPA’s data-collection process as the culprit behind what to many police-accountability activists were seen as surprisingly low numbers.

The board aimed in the annual report released in March to “enhance the transparency of the stop data collection process by providing the public with detailed information on how the data is collected and submitted and how the Department [of Justice] and law enforcement agencies ensure the integrity of this data.”

That information includes the date, time and duration of a stop, the reason for a stop, the officer’s perception of the race, ethnicity, age, gender, disability or language fluency of the person stopped.

The move formally puts to rest Brown’s much-derided and decades-long pursuit of two massive water- and fish-conveyance tunnels to ensure water security in the state while protecting the fragile Delta ecosystem. That plan would have cost California at least $20 billion—and up to $70 billion by some estimates.

Gov. Gavin Newsom pledged to pull the plug on Brown’s plan as a candidate and has called for a smaller, single tunnel to modernize the state’s water delivery system.

The DWR says the single-tunnel project is needed to protect water supplies from seawater intrusion into the Delta, and to mitigate potential damage from earthquakes. “It will be designed,” says DWR of Newsom’s tunnel vision, “to protect water supply reliability while limiting impacts on local Delta communities and fish.”

North Bay State Sen. Bill Dodd cheered Newsom and the DWR’s move to rescind the Brown-era applications and twin-tunnel plan, which he describes as “fatally flawed.”“By closing this chapter on the euphemistically named WaterFix,” says Dodd in a statement, “I believe we can move to a thoughtful, collaborative approach that meets our water needs while safeguarding the environmental and economic vitality of the Delta.” —T.G.