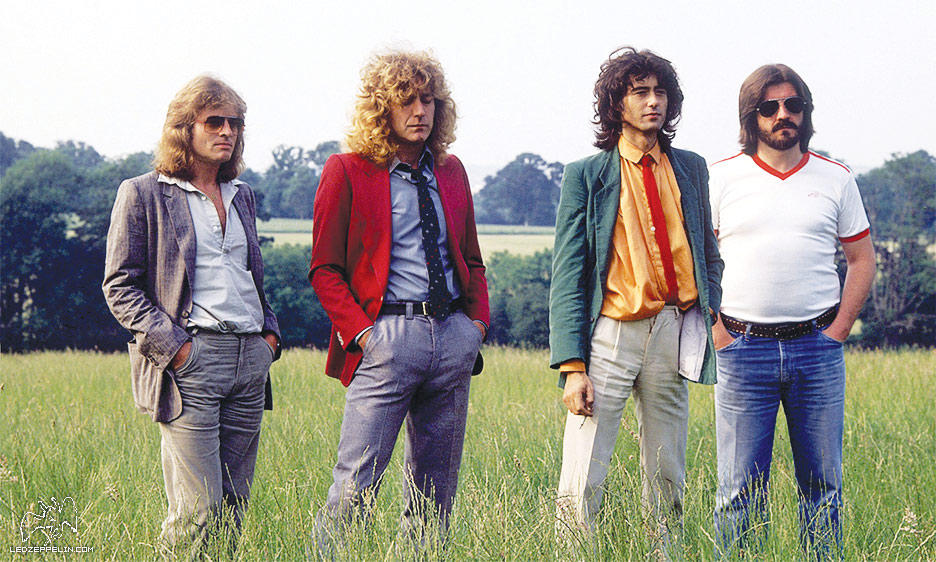 The question that’s inevitably asked is: Does the world really need another book on, by or about classic-rock legends Led Zeppelin?

Of course it does, and especially around the holidays (so someone else can buy it for us). The listening public’s craving for the virile, swinging bombast of Zep is insatiable. And in the 50th anniversary year of the founding of the band, there’s a fat new book of photos and backstage ephemera to commemorate the half-century mark, simply called Led Zeppelin, by Led Zeppelin.

It’s the first official member-sanctioned photo book about the band, and arrives on shelves about a decade removed from Zeppelin’s outstanding 2007 reunion concert at the O2 club in London, which featured Jason Bonham filling in for the late drummer John Bonham.

There are plenty o’ pics from the well-regarded reunion show in a book that’s organized chronologically and roughed out around the band’s eight original studio albums and live album (The Song Remains the Same) that were issued from 1969 to 1979. Led Zeppelin spans the whole of the band’s career—from early shows in San Francisco to the current day.

There are plenty of backstage band shots, onstage band shots and lots of shots of giant crowds at epic rock festivals such as Knebworth. A 1970 snap of Bonzo wearing an ugly sweater and sitting behind a small drum kit is kind of precious. A well-traveled backstage shot of Jimmy Page chug-a-lugging a bottle of Jack Daniels is kind of gross.

One curiosity about Led Zeppelin is that the book is short on documentation of the first Led Zeppelin reunion, the 1985 Live Aid concert universally declared to be horrible, or at least by Rolling Stone magazine. That’s the same Rolling Stone which declared, upon the release of Led Zeppelin I in 1969, that Jimmy Page was a writer of “weak unimaginative songs and the Zeppelin album suffers from his having produced it and written most of it.”

It would have been cool to see that rather imbecilic review also be a part of Led Zeppelin, which is reminiscent of those big Taschen art books that come out of Germany (the publisher is a British concern called Reel Art Press), and is indeed as heavy as a lead balloon and as big as the Hindenberg. It will take up most of the space under my Christmas tree this year—and may in fact topple it.

The book’s getting good press in the lead-up to 2018’s season of consumer chaos—may “Black Dog” be your spirit guide on Black Friday this year. As its members prepare to ride the stairway to heaven, the AARP magazine recently threw some positive press to the book as it noted the band remains the third best-selling rock outfit in history, after the Beatles and the Eagles. The charts bear it out: every time Zeppelin reissue their catalogue—most recently with the 2014–15 remasters—the offering goes gold or platinum, at least in Norway.

At 400 pages, the book will leave longtime fans and newcomers to the band alike with a clear sense of the outsized debauchery and musical genius that the quartet brought to bear over a decade when they indeed ruled rock and roll with a hammer borrowed from the Gods (along with numerous purloined riffs from black American bluesmen—but they’ve at least paid those dues).

The roster of shutterbugs whose work peppers Led Zeppelin includes the likes of Bob Gruen, Ross Halfin, Eddie Kramer and many others, and the generous smatterings of ephemera include backstage passes, vintage ticket stubs, a photo of the 7-inch of “Rock and Roll,” and a few letters and memos from Atlantic Records, whose Ahmet Ertegun signed the band in 1968. One letter was written by the band following the death of John Bonham from alcoholism, in 1980, letting the world know that they would not, could not, continue without the animal ferocity of Bonzo, rock’s greatest drummer.

The photos, though not all of them, are annotated with descriptions and histories provided by Jimmy Page, Robert Plant and John Paul Jones, in the back of the book. There are also full-page quotations in the basically unreadable “Zep font” from Plant, Jones and Page peppered throughout. The annotations make for some pretty interesting reading, though the gist of the textual conceit in Led Zeppelin is a song that rides the same theme of maximum self-regard throughout—regardless of which living member is making the claim: We were a pretty goddamned great band, huh?

In the gaming scene this holiday season, the Nintendo Switch is still the hot property to have. While most of the console’s current releases are older games, the ability to play them anywhere remains a big draw. Blizzard’s Diablo 3 is now six years old, but remains the pinnacle of dungeon-crawling, hack-’n’-slash gaming, while critical darling Undertale brings its engaging storyline, lovable characters and unique RPG gameplay to a Nintendo console for the first time. Old-school fans will want to check out Grim Fandango, the classic point-and-click adventure game in the land of the dead.

The perfect gift for gaming friends is Nintendo’s latest killer app, Super Smash Bros. Ultimate, to be released on Dec. 7. This mascot fighting series, famous for including video-game characters from across Nintendo’s vast library, promises an upgrade both in content and playability, and features a roster of 72 characters, drawn some of the most famous games in history.

OK, now let’s talk about comic books. Grant Morrison, legendary writer of such classics as Justice League, Animal Man and All-Star Superman, has returned to writing a monthly ongoing comic for the first time in years with ‘The Green Lantern.’ Featuring the adventures of Hal Jordan, a member of the intergalactic police force called the Green Lantern Corps, the comic has Morrison’s trademark high concepts and bizarre happenings, balanced out by human drama.

The series just started, so now’s your chance to pick up the first issue for your prospective DC Comics fan. If they’re more fans of Marvel, however, pick up the first few issues of ‘Spider-Geddon,’ Marvel’s next big-event comic where Spider-Men from across the multiverse join different sides in an battle over Spider-Man’s very mortality, while in the background comes a menace that threatens to destroy them all. Eek, it’s Donald Trump in a cape!—Alex T. Randolph