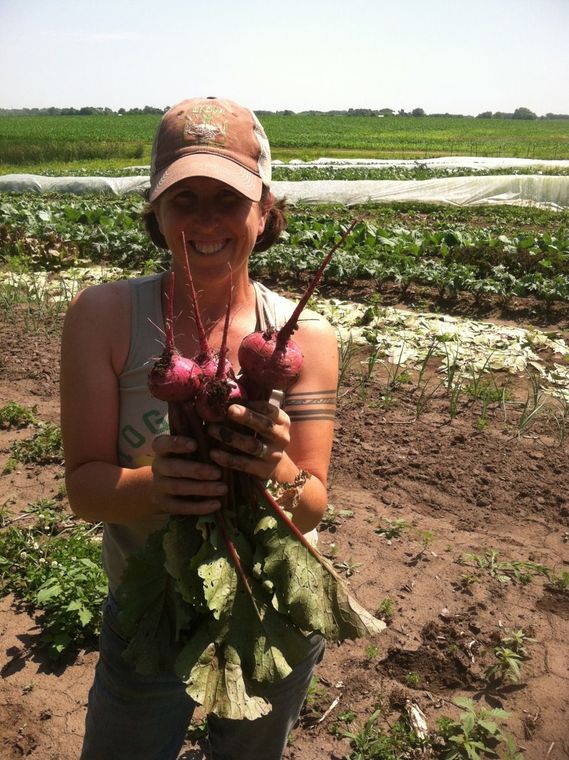 Hey, all you bossy gardeners! I’ve got the perfect book for you. Elizabeth Millard, co-owner of Bossy Acres, a Community-Supported Agriculture (CSA) farm in Minnesota, has written a book about growing food indoors. In Indoor Kitchen Gardening: Turn Your Home into a Year-Round Vegetable Garden (Cool Springs Press, June 2014), Millard writes, “Although my great-grandparents and grandparents were farmers, I grew up in the suburbs … I’d never imagined I’d be spending any time digging, weeding, or talking compost. The concept of growing food was about as foreign to me as algebra (which I also believed I’d never use).” Millard confesses that she got into gardening by “dating her way into it.” She met her partner, Karla Pankow, during a Habitat for Humanity build in Zambia, Africa. Years later, the pair launched their own farm in Northfield, Minnesota. Back on the farm, Elizabeth is referred to as Bossy E and Karla is called Bossy K, so that’s how I will refer to them here, too.

“Winter in Minnesota is notorious for wearing optimists down to a brittle nub,” writes Bossy E. The cure? As the snow buries the cars outside, and the rain keeps the soil too wet to work, get in that kitchen and start growing wave after wave of microgreens, pea shoots, radishes and other tasty vegetables. The Bossy broads thought that this would be impossible at first and would require an extensive and costly growing system. But, the simple growing experiments that Bossy K and Bossy E performed in their own kitchen one long, Midwest winter was a success! Next came more experimentation and documenting what worked and what failed. If they can grow food indoors, in winter, in Minnesota, one should be able to grow anywhere, especially here in California, with our mostly glorious weather-for-wimps.

The book is broken into three highly informative and enjoyable sections:

1. Growing Edibles Indoors, 2. Microgreens, Shoots, Herbs, Wheatgrass, Sprouts, and Mushrooms and, 3. Radishes, Carrots, Tomatoes, and Other Crops. Each section is then broken into more specific chapters. There is even a chapter on Attitude! Yes, I’m talking to you! If you’re going to grow plants indoors or outdoors you are going to fail. Again. And again. And then some more. That’s part of the fun. You are a mad scientist performing science experiments. Sometimes nature works with you and sometimes Mother Nature will bring you to tears. As Bossy E writes, “When I first started indoor edible gardening, I’d say my approach was definitely more Eeyore than Pooh, but over time, I gradually took on a more light-hearted attitude. After all this is supposed to be fun, right?” Fun is very possible. Especially if you start out right with the correct soil/growing medium, have proper sunlight and water consistently. Then you will succeed and we can clap for you and crown you with the Bossy title before your first initial!

Lighting is always the first question the author gets when talking about indoor growing. She promises that you don’t need fancy grow lights. If you have south-facing windows, this could be ideal as long as it doesn’t get too hot during the hottest part of day. “When selecting a site for growing, look for one that allows for natural light, but can also be shaded in some way.” If you don’t have a nice sunny window, Bossy E recommends full-spectrum fluorescent bulbs; the ones you see in boring office buildings, sometimes called shop lights at the hardware store. Even better is to find one that has hanging chains for easy lowering and raising. If you have a bigger budget she recommends High Intensity Discharge (HID) bulbs or Light-Emitting Diode (LED) bulbs. “A plant’s response to light is vitally important for growth, seed germination, and vegetable or fruit formation,” warns the author. “So, no matter what type of light source you’re using, be sure to turn it off at night so the plants get their rest.”

After you figure out your lighting, choosing your growing medium is next. Bossy E’s Best Indoor Blend is recommended in the book. This consists of indoor potting soil or compost mix and vermiculite. This helps with drainage, which is critical to happy seed sprouting.

I shuffled straight over to the microgreens chapter because I am still an impatient ex-New Yorker at heart, and I heard they grow fast; harvesting them in only one to two weeks. She refers to them as “the new kids on the block!” Kale had its 15 minutes. Now it’s microgreens. “Their cute size, mule-kick-level flavor, and nutritional clout make them a perfect addition to any indoor growing mix. Also, when kept in glass containers in the refrigerator, micros can last for up to two weeks, and still maintain their punch.” The author recommends microgreens as the first crop to grow indoors for novice gardeners. Most are tastiest when they are 1-2 inches tall and have sprouted a second set of leaves.

And now, back to kale. It always comes back to kale. Bossy E says we can even grow kale in our kitchen. (Like we don’t have enough of it in our raised beds? I say, “Never enough kale!”) Some smaller varieties she suggests that offer plenty of texture and color are Dwarf Blue Curled, Red Russian, and Lacinato. The best time of year to try these indoors is late spring or early fall, or else growth can be spindly and germination sluggish. But don’t you worry—Bossy E is with you every step of the way. Just about every chapter has a troubleshooting guide at the end listing the most common problems and how to solve them. Try, try again until you succeed. Then you can get back on your feet, feeling like a winning, veteran gardener, and get back to being your bossy self.

Next ArticleFood & Drink: Cheers to the New Year!