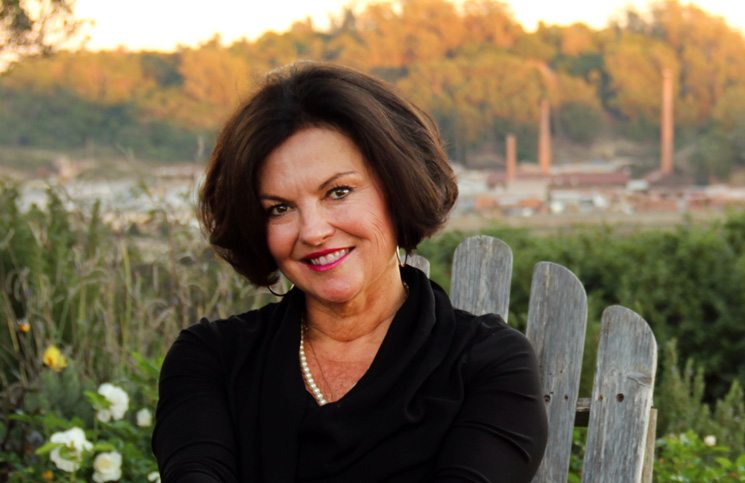 People around the globe, Kuhn says, understood that the passing of Princess Diana was not just the passing of a princess, but of somebody who stood for compassion. “And the passion she brought through the issues she shed light to.”

Kuhn says that she wanted to give her dinner guests that night something very meaningful, and ensure that the work of Princess Diana would be carried on. “I looked at the kaleidoscope around where we stood and I thought, the Napa vintners, the Sonoma vintners, the Marin vintners—these people harvest the land, they celebrate the harvest, they smell the juicy nectar of the grapes,” Kuhn says. “Whether fermented or not, this is life.”

Encouraged by her guests to take her toast out of the living room and into the world, Kuhn presented her idea in Napa Valley the following week. Support from key vintners like Robert Mondavi, Mike Grgich and Diane Disney Miller—“pioneers and dreamers in their own right”—led to the 1998 launch of Roots of Peace, an organization dedicated to replacing landmines in war-torn regions worldwide with bountiful agriculture.

“We need to focus on the economics of peace,” says Kuhn, founder and CEO of Roots of Peace and recipient of the Pacific Sun’s 2014 Heroes of Marin Lifetime Achievement award. “We need to empower people. We need to provide food security on war-torn lands. We need to help heal communities. And to me that begins by the removal of a simple landmine—it’s a metaphor of hatred, and it’s a physical example, but we need to begin that act of removing the hatred from our one soil and then literally planting the roots of peace.”

Since the global initiative began, Roots of Peace has removed more than one million landmines and unexploded ordnances from continents across the globe, and has helped more than one million farmers to improve orchards and crops. “Like little Johnny Appleseed, I go around the world, giving people cards and inviting them to join me,” Kuhn says. “We’ve planted rice in Cambodia, grapes in Afghanistan, orchards in Croatia, flowers in Bosnia.”

Kuhn refers to her work as “changing the tide of hatred into love” by restoring damaged communities to economic self-sufficiency. “When you plant a seed, regardless of the color of your hand, the politics in your mind or the faith in your heart, that seed will grow, as it has for thousands of years,” she says.

A deep respect for the land can be traced back to Kuhn’s family roots in Marin County. Her great-great-grandfather sailed to California from Maine in the early 1850s, purchasing thousands of acres of land in what is now Marin and Sonoma. Her grandfather was president of the Rotary Club of San Francisco in the early 1940s, and his legacy was to help establish what was to be called the United Nations.

“For me, Marin County is really about the land and its people,” says Kuhn, noting that the original model for the Golden Gate Bridge was once laid out on her living room table, when her grandparents lived in the house and hosted a fellow “dreamer” who wanted to “turn his vision into reality.”

Kuhn’s grandmother, she says, encouraged her to dedicate her life to doing something for peace. “And to take those riches that we derive from the land and from its people, and to bring that beautiful spirit of Marin County out into a world that is so thirsty, so hungry … for love.”

A graduate of San Rafael High School, Kuhn holds a degree in political economics of industrial societies from UC Berkeley. A reporter and producer for CNN and other news organizations in the ’80s and ’90s, Kuhn was living in Alaska with her husband, who was working for IBM and who is now the president of Roots of Peace. She then went on to begin her own television news organization—NewsLink International—reporting on the Exxon Valdez oil spill and the melting of the Ice Curtain between U.S./Soviet relations.

The road hasn’t always been smooth. Before the birth of her fourth child, Kuhn was diagnosed with malignant cancer and told that she would not live. “That stops you in your tracks,” she says. “But it can also either paralyze you or make you realize that each day is a gift.”

She’s held on to the latter. “That’s the way I’ve always chosen to live my life,” she says. “I’ve just had to lead with faith, not fear, and be that pioneer woman that I know my great-great-grandfather would be very proud of.”

Although Kuhn is honored to win the Lifetime Achievement award, she says she’s far from done with her work. Her biggest goal? “World peace,” she says, without missing a beat. “Don’t blink.”

“It’s in my soul; it’s in my DNA; it’s in my spirit; it’s in my mind; it’s in my intelligence, to do whatever I can with the human footsteps that I have, and with these hands, to inspire the world to not forget the legacy of war,” she says. “Those beautiful leaders who have been in my life—let’s use them and draw upon that inspiration and believe in the world what is possible rather than what’s not.”

Next ArticleFeature: Breaking the news