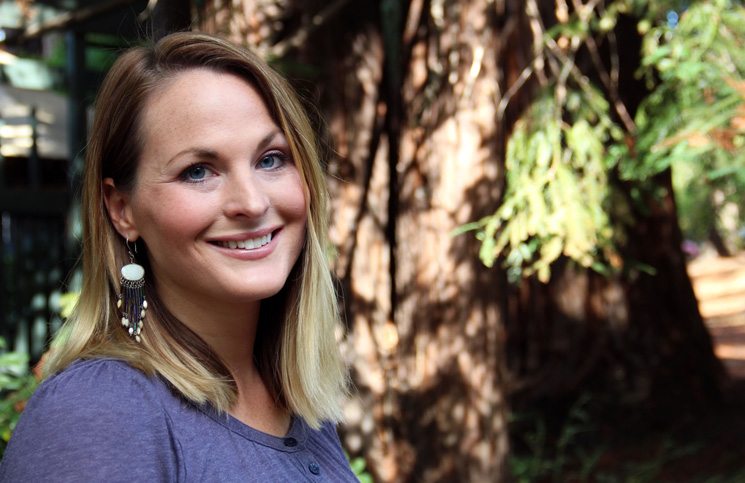 “[It] really opened my eyes to what I wanted to be a part of in Marin County and what I didn’t want to be a part of,” Sims says, speaking about her experience at the Branson School and the eye-opening financial disparity that can be found within the county. “I realized that folks that had less, who were sort of judged as being less than, were the folks that actually had the most compassion.”

In her teens, Sims moved with her mom to Canada, where she had a formative experience with law enforcement that, little did she know, would precipitate an influential career shift.

“I saw friends whose parents treated them poorly—both when I lived [in Marin] and when I lived in Canada. I remember one instance, when I lived in Montreal, a friend of mine was beaten by her father and [the police] didn’t do anything,” Sims says. “They said that it was normal, and that parents were allowed to beat their children.”

It was that disconnect, Sims says, that propelled her into her career in advocacy work and into establishing West Marin Advocacy (WMA)—a nonprofit based in West Marin that provides direct, confidential advocacy services to survivors of community and family violence. WMA offers a breadth of services from assisting survivors of domestic violence and sexual assault to working with clients who have had unfavorable experiences with law enforcement and mediating between the parties to achieve whatever goal the client may be seeking—from obtaining a restraining order to filing a police report.

“I guess there’s a side of me that made me feel angry,” Sims says, “when I would see someone have the courage to call the police and then law enforcement not treating that person accordingly or not assisting them.”

Sims started by making a move back to California in 2002 and studying political science at Golden Gate University, which opened up the opportunity to work in the domestic violence unit of the San Francisco Police Department. While garnering first-hand experience in advocacy alongside officers, Sims was secretly fighting a battle of her own—she was in an abusive relationship from ages 19 to 21.

“It was hard,” Sims says of working on domestic violence cases while simultaneously experiencing personal abuse. “[It was] shameful, terrifying. I was pretty isolated from my family. I think that it’s the perfect example that anyone can go through an abusive relationship because looking from the outside in, I had an education, I was working and I think that sometimes when people have a lot at stake it makes that abuse feel even more profound.”

But Sims, a survivor of the abuse, never let her experience define her. She continued her education at Sonoma State University, focusing on interdisciplinary studies—a blend between public administration and women’s and gender studies.

It was at the end of 2009 when Sims founded WMA, which she says initially started as “very grassroots.”

Sims cites geography as a leading motivation for starting her agency. “A lot of people were not getting the services that they were entitled to because of geography,” she says. “You know we have county agencies, and a lot of them are centered in San Rafael, and for folks who live over the hill or in West Marin, it’s just geographically difficult to get to those agencies.”

West Marin Advocacy, Sims says, receives about four to five calls per week—the most common of which come from domestic violence or sexual assault survivors looking for housing or shelter.

“I like to provide services for people who are homeless as well and let them know that they can still live with dignity—that you can not have an address and still be a vital part of our community,” Sims says. “Being a service provider in the community [is to] recognize someone for their value, not for their socioeconomic status—that’s really important to me.”

But it was her thesis, “Social Service and Law Enforcement Responses to Human Trafficking,” that would end up sparking a blaze in Marin’s community agency circuit.

“I was interested in looking at what our county was doing to address human trafficking,” Sims says. “It was a really hot-button issue for other counties in the Bay Area and it was a little head-scratching why people weren’t looking at it in Marin County.”

During her research, Sims says, she spoke to members from the County of Marin Probation Department to the District Attorney’s Office to the Human Rights Commission to further explore human trafficking’s presence in Marin.

“[The agencies] did a Google search and the only thing that came up was my thesis,” she says. “So we started working together to try and get more awareness to the general public that this is an issue that is happening here. When I kind of identified that there was a need for community awareness, there was a huge response from law enforcement and community agencies.”

That response formed the Marin County Human Trafficking Task Force, a collaboration of agencies that includes the DA’s office, the Dominican Sisters of San Rafael and Health and Human Services. From April to October of this year alone, the task force has identified and provided referrals to 27 human trafficking survivors countywide.

Sims is quick to add that human trafficking doesn’t just mean “a mass amount of people moving huge distances.” It’s force-, fear- and coercion-based, she says. “It’s not just people being brought into the country hidden or tucked away. It could be someone who is from Marin County who is being forced to work against [his or her] will.”

With the increased involvement of Marin’s agencies in the task force, Sims is able to shift her focus back on WMA, her friends and family.

“My role models are my peers,” Sims says, speaking matter-of-factly about her close-knit network. “Working moms and people who manage to work and care for their kids without the ability to pay for full-time child care. Pretty much all of the women that I grew up with—they are the people that when I want to stay in bed, I think of them and it’s sort of like a really positive peer pressure.”

Next ArticleHeros of Marin: Heidi Kuhn