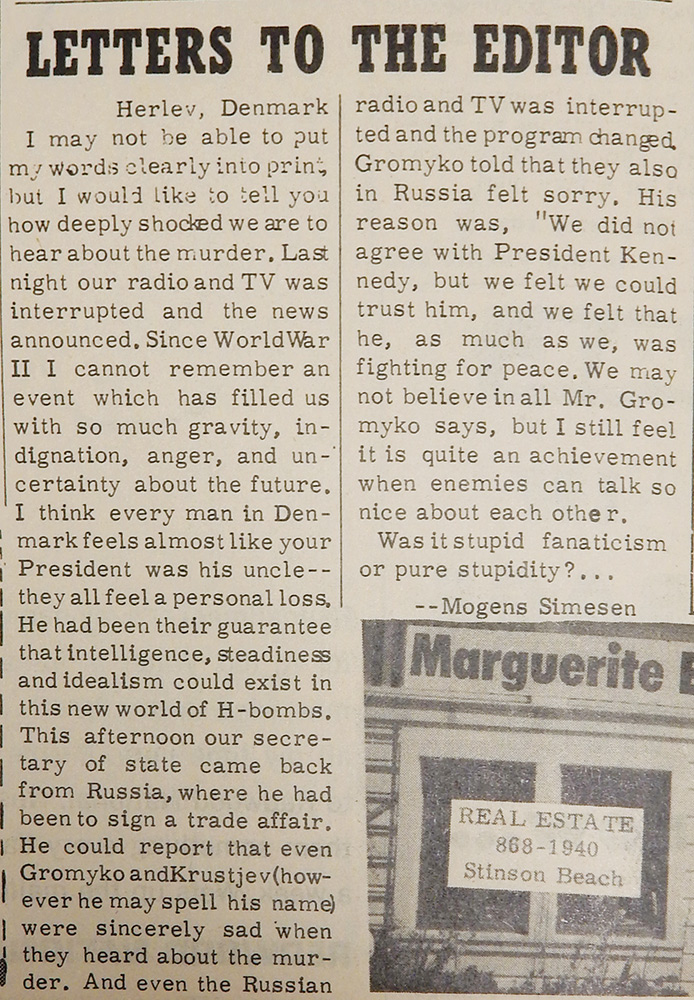 We’ve been going through old Pacific Sun issues for the past couple of months to plan this week’s 55th Sun anniversary issue. And nothing says “I’m having too much fun now” than turning editors loose on old bound volumes of newsprint in search of choice tidbits to serve to a loyal Pac Sun readership that’s stayed with the paper all these years.

One the thing that jumps right out is that when the Pacific Sun was founded in 1963, it was a community paper that pretty much served West Marin County.

With the demise of the Village Voice last year, the Pacific Sun is now the oldest continuously published alternative weekly in the country. As I went through the ’60s archives, the “alternative weekly” part of its history manifested almost in phases through the decade.

When it was founded, the Pac Sun had regular offerings of news from churches and business leaders that highlighted local births and deaths and news from local schools. It posted Little League scores, which may be the purest signal of a successful community paper’s local-only approach to journalism.

But as a reader follows the decade, the question raised is whether the countercultural politics of the day caught up with Marin County, or vice versa. To use the vernacular of the day, that’s a heavy thought, man.

There’s one photo caption from the very early days of the paper that cracks me up whenever I think about it—it’s so “environmentally incorrect” as to be worthy of a face-palm moment worthy of outgoing Trump chief of staff John Kelly.

In the very early days, the paper printed a photograph of a man clutching a brace of huge frogs, all dead. The photo came with the following caption: “‘There probably aren’t any more frogs at Nicasio Lake,’” Cecil Sanchez of Inverness said after coming home with this catch. Sanchez was on hand at the opening of the Farm House restaurant in Olema last weekend and told of his fine luck at frogging.”

The Farm House is still there, but who knows where the frogs have all gone off to. When you think of Marin County these days, and especially West Marin, it’s through a generally-agreed-upon demographic lens of environmental awareness met with action. You don’t necessarily think of celebrating the death of 10 frogs and bragging off the front page that you probably killed ’em all.

By 1965, the paper was running big ads in opposition to the Marincello development proposal which gave rise, it is said, to the modern Marin progressive-activist sensibility. Residents were headed to the Deep South to rebuild black churches burned by racists, and committees were meeting to discuss the impeachment of Lyndon Johnson for war crimes. The “alt” was on.

And, by 1968, there were ads calling for the removal of then-governor Ronald Reagan from office. Steve McNamara was the editor and publisher, and the counterculture had seeped strongly into the pages. There was poetry. There was a news brief about how the Marin County supervisors were meeting to discuss whether 18-year-olds should get the vote, and there were countercultural comic strips that were, by turns, bizarre, amateurish and goofy. Tiburon letter writer J. W. Cook wrote that “The Pacific Sun is a very fine newspaper, but why do you feel you have to be ‘far out’ by continuing to devote space to these completely poorly drawn ‘comic’ strips. Yuuuck.”

The year 1968 is generally agreed to be among the most divisive and soul-wrenching years in American history. Martin Luther King and Robert Kennedy were murdered, the Vietnam war raged, and the Civil Rights push was met with intense push-back.

Given the bullet-strewn backdrop, one of the more interesting and telling debates that played out in the Pac Sun’s pages in the late 1960s was between rod-and-gun clubs in the rural county and the Marin supervisors of the time who tried to pass a gun-control ordinance.

Had it passed—and it almost did, wrote McNamara—Marin’s gun-control law would have been the very first gun-control ordinance in the country.

By 1968, the paper had a paid subscription of 8,519 and could boast the largest paid circulation between San Francisco and the Oregon border. Through the decade, it would cover the Synanon cult’s early days, just as it covered these events called “Renaissance Faires” that would pop up in the shadow of Mt. Tam or elsewhere in the ur-unicorn wilds of West Marin. And speaking of Mt. Tam, one of my favorite calendar items from the era was from July 1968 when the paper let the public know that Supreme Court Justice William O. Douglas would be making a Mt. Tam hike, and the public was invited to romp up the mountain with the civil-libertarian court legend. “Restriction of free thought and free speech,” he once said, “is the most dangerous of all subversions. It is the one un-American act that could most easily defeat us.”