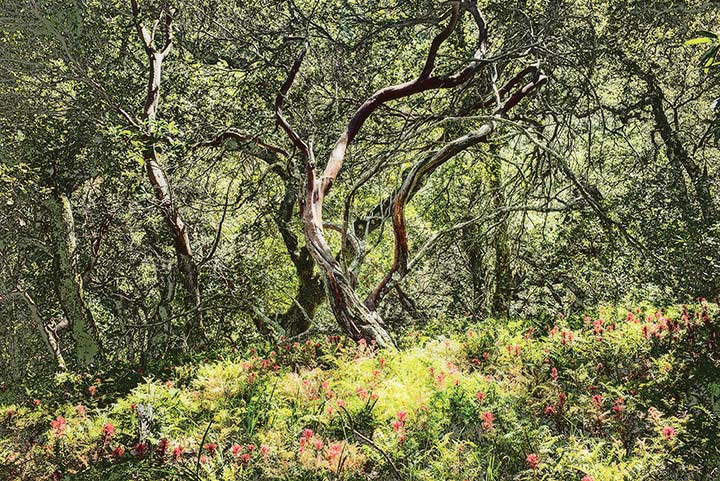 For North Bay art lovers, Marin County is a hive of creativity that boasts artists of all disciplines making their home locally while thinking globally in their work. This week, more than a dozen art shows are putting Marin’s full range of artistic perspectives on display, and two in particular aim to introduce audiences to new worlds of art.

Opening at the MarinMOCA on June 15, Novato’s natural landscape takes on magical properties through the lens of photographer Alun Wyld in his solo exhibit, “The In-Between.”

“I’m what you consider an animist,” says Wyld. “I believe in energy existing in anything; rocks, streams, you name it.”

With that mindset, Wyld captures the realm between physicality and spirituality in his landscape and nature photography. All of the works in the upcoming show were photographed earlier this year at various nature preserves and parks in and around Novato. With minimal photo editing, Wyld blurs the lines between what he calls the magic and the mundane.

“In the natural world, all is magical and all is mundane simultaneously,” he says. “Anyone who lives close to the Earth know of sights in the natural landscape that seem to stand apart as distinct as their surroundings.”

By seeking to show the thin veil that exists between what is seen and what can be experienced in nature, the photography in Wyld’s new show appear to shimmer and move with a mystical air of energy, as seemingly indistinct tree branches and streams take on new dimensions within the context of Wyld’s animism.

Born in Northern California, but raised in England from a young age, Wyld spent his formative years exploring the countryside and daydreaming about the Arthurian legends and other fairy tales he grew up reading.

“Some of the feelings in this show comes from me being in the woods in that little village in England,” he says. “It’s been carried with me forever.”

After receiving formal training in the ‘70s, Wyld worked in architectural photography and the like until he lost interest and took up bicycle racing for many years.

“About three years ago, I received the passion to start over again in photography, and I’m much better now than I ever was,” laughs Wyld.

Now an artist member of MarinMOCA, Wyld opens his show in conjunction with two other exhibits at MarinMOCA, “Content Matters,” featuring works from over 40 artists, and “Ron Collins: Selections from his Collection,” displaying art from the North Bay philanthropist’s personal gallery of collected works.

In San Rafael, a completely different world of art opens on June 15 at the Dominican University Alemany Gallery with the new group installation, “Timeless Themes of the Persian Perspective.”

Curated by and featuring art from Marin Open Studios president of the board Shiva Pakdel, the show celebrates the cultural side of Iran and focuses on its distinctive art and imagery from the past and present.  Featuring over 40 works, the show is a compelling demonstration of the scope and range of Persian art and artists that transcend ideological and cultural borders.

Born and raised in Iran, Pakdel moved to the US at 17 to study commercial art and art history.

“I’ve always felt that Iran is so rich in art, and the conversation has always lacked in covering the arts of Iran,” says Pakdel, who is also the curator for the Madrigal Artist Series at Madrigal Family Winery Tasting Salon & Gallery in Sausalito.

Pakdel notes that most conversations about Iran turn negative, especially when she first moved to the U.S. “Because of my accent, I always get the question about my background,” she says. “Either people immediately switch to the political and they sort of step back, or people immediately open up and think of the culture and history of Persia and they like me. That’s my experience, but it used to make me hesitant to say anything.”

With the opening of “Timeless Themes of the Persian Perspective,” Pakdel is looking to bolster that cultural conversation by highlighting both classic and contemporary movements in Iranian art.

“This show is many years in the making,” says Pakdel. In addition to her own works, Pakdel is displaying pieces from Iranian-born and Marin-based painter Jaleh Etemad, former Tiburon artist laureate, and others from the Bay Area to Iran.

“For my own personal experience, every time I have a Persian-themed show, and this is by far the largest one I’ve done yet, people always enjoy it because it is so far from the usual,” she says. “Art is art, but if people want to see something completely different, this is the show to do it.”

Next ArticleLife of Brine