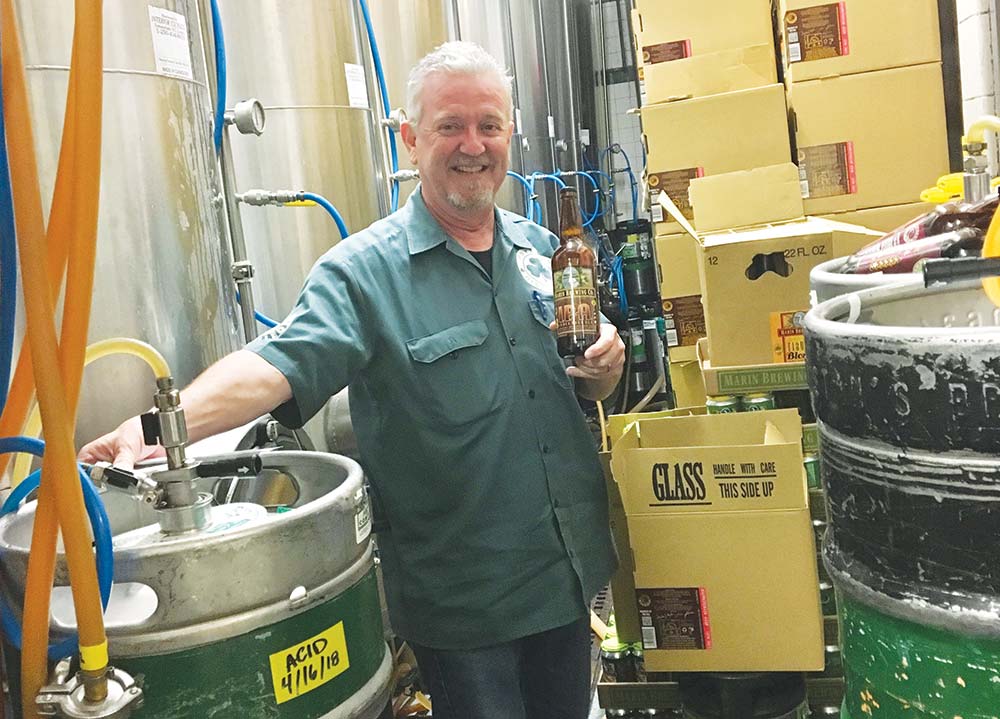 Brendan Moylan’s love of beer and brewing began when he split his first six pack of Coors with friend Dan Mahoney, a few years before they were of age. “We had a pretty good time,” he says with a laugh.

As a young adult, his passion for beer evolved into his vocation. Over the past 30 years, his love of beer produced a number of beloved Marin County brands and destinations—Marin County Brewing Co. (Larkspur), Moylan’s Distilling Co (Petaluma) and Moylan’s Brewing Co. (Novato).

This proud Irish-American’s upbringing shaped his vision for the Moylan brand.

“I always enjoyed beer. My father enjoyed beer. Watching him enjoy beer, but [knowing] it’s not for the kids, that taboo plants a seed in your head. You think, ‘Someday I’ll be able to have that.’”

At 18 he earned the role as a beer buyer. How can an underage kid professionally buy beer? “I knew what I was doing. I had enthusiasm for it. That was in the late 70s when imported beers were really kicking…That was the first phase of, ‘Hey, there’s more to beer than Bud, Coors, Miller.’ There’s character. There’s taste.”

After earning an accounting degree at St. Mary’s College, Moylan began pursuing his passion. “I started home brewing when I was 22. Just after I got out of college. It was just one of those things I kind of wanted to do.”

He started by hanging out at a nearby homebrew shop where he bought the ingredients to make his first batch. Naturally, there was a learning curve. He admits, “I screwed up the first couple batches before I started making good beers.”

The first batch of beer he brewed at home was the Whale Pale Ale series featuring Killer Whale Ale, Blue Whale Ale, Humpback Whale Ale and the like. His wife even made labels for them. In fact, he takes great pride in knowing the family name will carry on through Moylan’s. He also honors members of his family by naming beers after them.

Chelsea Moylan’s Porter is named after his daughter and Danny’s Irish Red is named after his uncle (aka “Big” Dan Healy), a bagpiper married to his paternal Aunt Josephine. He actually played on Moylan’s opening day. “Like any good Irish business, going in and going out, you need bagpipes,” Moylan says.

Moylan draws inspiration from an iconic San Francisco establishment: Anchor Brewing. He marvels, “Fritz Maytag took over the facility in the 60s and built a shrine, that brewery is gorgeous, so first class. God Bless him. Incredibly so. I knew I couldn’t repeat what they did…But I could make beer as a good.”

Indeed. Moylans’s brews have won more than 100 gold medals. Each year, the two breweries make 100 different beers; 20 are brand new beers and the other 80 are staples.

“We were very early on in the craft beer movement. We got a head start on it and we just keep making new things. That’s the fun of it. There’s so many breweries making so many fun things and we share them.” His brewmasters are vital collaborators and clever creators when it comes to keeping flavors fresh.

“There is a lot of art in the process. Our brewers are really challenged like no tomorrow. He’s making 50 different beers this year and 10 of them are brand new. That’s not an easy assignment…My two brewmasters, Derek Smith in Moylan’s and Arne Johnson in Marin Brewing Co., both incredibly talented individuals.”

Like craft brewing, Moylan got into microdistilling early, too. He opened his Petaluma distillery 15 years ago.

“We make 300-400 cases a year, but you can tell by the medals we’re winning that we’re putting a lot of effort into what little we have…the one thing we’re doing different than other craft distilleries is we’re patient. We have older whiskies before we bottle them. It costs more, it doesn’t make the business profitable, but we’re building that foundation, we’re building that reputation and that’s really important for us.” Y