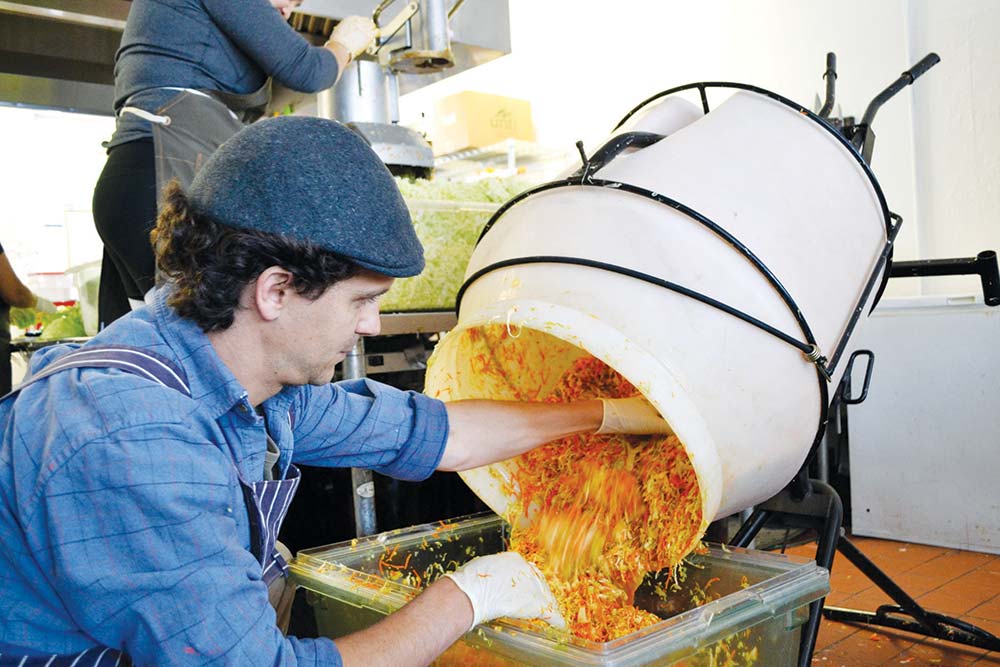 Sure, Iwelcome a little pickled cabbage into my life, now and then. Who doesn’t?

But last year an astonishing encounter with a popup deli—Great Scott, the chef is grilling the sauerkraut before grilling the Reuben!—inspired a trip to the store for some “authentic” German sauerkraut, to try grilling my own. And I’ve got say, alongside a kielbasa-style veggie sausage and mashed potatoes, it does seem like the right kind of condiment.

But I was surprised when I began to see locally made sauerkraut featured prominently in the fresh deli case at the supermarket. That all changed one day at the California Artisan Cheese Festival, where local purveyors not purveying cheese included products from Sonoma Brinery. Specifically, they offered a taste of their latest product, escabeche, and I took a bite. That crunch, in my mind, echoed throughout Grace Pavilion. Then, I tried the new dill pickle spears. I became woke to the brine.

Escabeche, as it’s experienced hereabouts, is a mix of pickled carrots, onions and jalapeños, and is commonly served in Mexican restaurants and found in the canned food aisles of grocery stores. I like pickled jalapeños, and even serranos when I feel like bringing on the heat, but this was something different. What was it that made it more…alive?

After tracking down a carton of Sonoma Brinery’s escabeche in Oliver’s Market—I’m just noting this because it’s hard to find elsewhere—I confirmed that I love the taste, but I disagreed with the thin-sliced style. I’d prefer quartered spears of jalapeño, like the pickles. Could I make my own? Consulting the oracle of the internet, the answer was, “Yes.”

Pickling peppers the natural way, by fermentation, is said to be as easy as adding salty water, and waiting a few days. Could it really be that easy? My first batch turned out crunchy and tasty. My second batch, with radishes added, turned bright pink. Was it the radishes, or had something gone awry?

You can’t believe everything you read on the internet, so I made an appointment with David Ehreth, president and managing partner at Sonoma Brinery, to get the scoop. Ehreth started the company in his garage in 2004 as sort of a retirement project after a career as a telecom executive in Petaluma’s “Telecom Valley,” a phrase he says he helped coin. Today, he doesn’t look much retired—he’s in the middle of a meeting with his sales manager, plus half a dozen other things, in a good sized commercial building in Healdsburg.

Ehreth says his was one of the first serious brineries on the scene, predating Santa Rosa’s Wildbrine and Farmhouse Culture of Santa Cruz.

They’re all competitors of sorts, but each specializes in different products. Ehreth explains that at first he aimed for a niche that didn’t compete with existing products in the stores he was pitching.

Existing products include pickles and other vegetables are processed using either vinegar or heat-treated after fermentation.

So what is fermentation, if it’s not the kind that produces alcohol, like wine or beer?

“If I can go nerd on you for a moment,” Ehreth warns, before diving into a synopsis about the lactobacillus bacteria that exist on the surface of all fresh vegetables. “You can’t remove them by washing.” What’s more, they immediately begin to feed and reproduce—but not in a bad way, unless they’re a bad actor, he insists

“Those bacteria will really stake out their turf,” says Ehreth. “They’re very territorial. They go to war with each other.” The incredible part of it is that the four horsemen of the food industry—listeria, E. Coli, botulinum, and salmonella—are on lactobacilli’s hit list. None survive. Five bacteria enter—one bacterium leaves.

Quoting the Food and Drug Administration, Ehreth states, “There has been no documented transmission of pathogens by fermented vegetables.”

The problem with my pink batch of pickled peppers, Ehreth suggests, may have been wild yeast getting a toehold—red is a sign of yeast.

“When you buy Sonoma Brinery,” he says, “you are buying a level of expertise.”

Pickles don’t have to be translucent and soggy, like some home-fermented pickles I’ve graciously accepted but never finished eating, or store-bought pickles that are pickled in vinegar.

“You need surplus to make vinegar,” Ehreth explains, recounting the demise of fresh pickling. Before World War II, vinegar was made from comparatively precious products like wine and apple cider. After the war, there was an abundance of nitrogen fertilizer on hand. Armed with this, farmers created a surplus of corn and grains, and one of the things you can do with grain is make cheap, distilled white vinegar. Producers said, “Look at this, we don’t have to ferment.”

The other difference is that almost all jalapeño products are heat processed, says Ehreth, and there’s no way you can heat treat and not adversely affect the texture of a jalapeño.

The escabeche was the one product he didn’t create. They had launched their curtido, a Central-American style sauerkraut, and had some jalapeños around, so production manager Mayra Madrigal tried a batch of escabeche.

“It was so good it made my head explode,” says Ehreth.

Sonoma Brinery sources conventionally farmed pickling cucumbers, according to Ehreth, because the organic kind are unicorns—the nation’s largest pickle buyer buys conventional pickles for its burgers, so there isn’t much incentive for growers to go organic until so goes Mickey D’s.

In his spartan kitchen and office, Rick Goldberg of Wildbrine is finishing up a test project, scooping batter from a mixing bowl. On one counter, an earthenware crock is burping slowly with another new project. But while Goldberg’s office, which he shares with business partner Chris Glab, has the feel of a startup, it’s one of the nation’s largest fermented food startups to date.

Outside, employees whiz by, riding on electric pallet jacks, moving half-ton bins of plastic-wrapped product on shipping pallets to and fro. It’s a much larger operation than Sonoma Brinery, although the building is shared with HenHouse Brewing and another company.

“I was retired,” says Goldberg. “I wasn’t looking to go back to work.”

Previously, he and Glab turned a bagel-and-cream cheese wholesale business to food trucks into a multi-million dollar cheese spread and salsa business (remember Sonoma Salsa?), selling it to a larger company in 2006, which later was absorbed by yet another company.

Goldberg volunteered at the Ceres Community Project in Sebastopol, which brings wholesome meals to people facing serious illnesses, with the help of high school students. There, he learned about the health benefits of probiotic, fermented foods, and began packaging fermented foods as a “one or two day a week thing,” to sell in a few local stores. It’d be a little project for his retirement, and make a few bucks for Ceres.

Eight years later, Wildbrine is hand-chopping and machine-chopping through some 5 million pounds of organic cabbage a year, distributing it throughout the U.S., Canada and Japan, and, according to Goldberg, it is the biggest selling brand in its category according to market data that doesn’t include Whole Foods—although they certainly have a big presence there.

“When I grew up, we were always out playing in the dirt,” Goldberg says, musing about the bugs in our biota. “We had our hands dirty, and then we’d grab a sandwich. I think we over-sanitized our gut, and realized we had made a mistake.”

That being said, Wildbrine follows an exacting protocol of sanitation for employees and visitors: I must don a beard net, hair net, plus booties for my shoes, and a smock in order to tour kraut factory.

At 10:30am, there’s already a full sheet of batches logged and tested. They’ll pack 35,000 pounds of kimchi today, all of it weighed by hand and adjusted by employees with contents from a half-ton bin filled with something that looks like spilled pizza. It’s amazing that this spicy mix contains no tomatoes.

Wildbrine’s newest products use surplus cabbage leaves from their kimchi and sauerkraut process, but the culture is fermented with cashew nuts to make a simulacrum of Brie cheese and butter. The result is darker than brie, with a texture akin to halvah, but the bloomy rind is spot-on in aroma. The butter is kind of in between hummus and foie gras—it would go well on a bagel.

Wild West Ferments also has its origins in health concerns. Around the time that co-founders Maggie Levinger and Luke Regalbuto met while attending Humboldt State University, Levinger’s mother was diagnosed with colon cancer, spurring their interest in intestinal health and probiotic foods.

After college, the couple traveled in Eastern Europe and Latin America, experiencing fermented foods like smreka in Bosnia and kisli kupis in Romania, while working in organic farms through the WOOF program. They began fermenting foods in the kitchen of an Inverness restaurant, and sold their products at farmers markets. Four years ago, they took it up a notch.

Behind a shuttered storefront in Petaluma, formerly a French restaurant, Regalbuto and three workers are grating cabbage and carrots to make “24 Carrot Gold,” a carrot-heavy sauerkraut. Wild West is a decidedly more small-scale outfit than the others, but they’ve got their niche—and this is the first brinery visit where I can smell some real brine, from my first step through the door.

Regalbuto shows me to the fermentation room, which must have formerly been the dining room—the faux-textured paint job does lend the scene an Old World feel, and it’s filled with brown, earthenware crocks imported from Germany. Is that a burp I just heard? Yes, Regalbuto says, the fermentations are burping away through a seal of water on the jar lids. They’re a pain to maintain, he says, but it’s worth it.

“Now, the others won’t like me talking about this,” says Regalbuto, before explaining that he feels that plastic may not be the ideal medium in which to ferment raw foods. But to each his own.

Selling at farmers markets in San Rafael and Point Reyes Station, Wild West just recently got back into the new regime at Whole Foods, requiring a big jump in production from this small business, which ferments for six weeks—a bit longer than the others.

Waving his hand like a stadium fan, Regalbuto describes the arc of flavors and competing microbes that rise, then fall, in epochs during fermentation—it’s kind of like naturally fermented wine.

Each of these brineries have their own repertoire, whether heavy on the radish, like Wild West, or spicy with the kimchi, like Wildrine. The signature sauerkraut is the telling one—Wild West’s is more finely chopped, herbal and floral than others, highlighting coriander spice, while Wildbrine’s is coarse and juicy, with a garlicky aftertaste.

Maybe it’s all about the different recipes, and the sourcing of produce. But also, like Goldberg told me toward the end of my visit  at Wildbrine, “It’s really a piece of magic, it’s not just science.” Y