Are electric bikes and a third lane on the Richmond-San Rafael Bridge answers to traffic congestion? 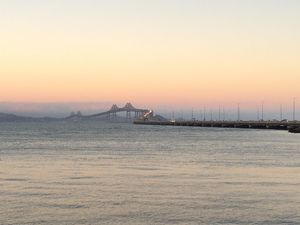 The bikes are arriving at the same time that alternative transportation critics are saying biking is an effete activity unworthy of infrastructure investment.

Electric-assist bicycles, sometimes called “pedelecs,” use an electric motor to give riders an extra oomph down the road. The motors attach to either the front wheel, mid-bike or the rear wheel. While electric bikes, like electric cars, have been around for a long time, it’s only recently that technology has arrived to make them a truly reliable and effective alternative transportation vehicle.

Europe and China already are on the electric-bike highway. They account for the vast number of electric bike sales. But signs are starting to become evident that electric bikes could be on the verge of an important growth spurt in this country. And as the new electric bikes enter the market, they could create the impetus for improvements to bike infrastructure, which would in turn spur increased ridership, which could in turn help reduce reliance on single-passenger auto travel and vehicle congestion on local streets.

It’s the electric-assist nature of the new bikes that holds the promise. No longer are bike riders who want to go to the store, to school or to work faced with a ride that leaves them in a puddle of sweat. Electric-assist can turn a daunting ride into an easy trip, and can make easy work out of riding over hills. The technology turns bike riding into a utilitarian mode of transportation that bridges the gap between auto travel and motor scooters and motorcycles. A big plus for the electric bikes: No license needed in California.

“Starting a few years ago, when Stromer and Specialized came to the market with new technology and really legitimate electric bikes, we jumped in and got behind the movement,” says Ken Martin, co-owner and CEO of Mike’s Bikes. The San Rafael-based company started in Marin and now has outlets from Sacramento to Palo Alto.

The same high rate of acceptance has occurred in China, according to Navigant Research. The consulting company looked at the future of electric bikes through 2023. A recent Navigant study estimates that worldwide sales of electric bikes will increase from 31.7 million annually in 2014 to 40.3 million in 2023. Growing acceptance in the United States could further stimulate that number—providing communities embrace bike transportation and invest in infrastructure that can encourage its growth.

Marin cities and the county have worked to improve bike infrastructure for several decades, making the county an ideal launching pad for an increase in electric bike use. The county “is a perfect fit” for electric bikes, Martin says.

The introduction of what are called “fast electrics” changed the electric bike scene for potential riders seeking utilitarian transportation with a dash of speed. Two companies, Stromer and Specialized, brought to market bikes that use electric-assist to help propel vigorous riders as fast as 28 miles an hour. Even riders going easier on the pedals can find themselves moving at a respectable clip. Ford electric bikes, dubbed Pedego, also present potential purchasers a choice of rides, as do several other manufacturers. But it’s the capability of that 28-mile-an-hour threshold that has riders who seek speed looking at the new fast electrics.

Although they may offer the sexy choice for two-wheel, electric-assist transportation, the market for electrics is widening to embrace a spectrum of models, including cargo bikes and—wait for it—mountain bikes.

The emerging market in Marin has led Mike’s Bikes to introduce new models this year—one from Raleigh Bikes and one from a company called Lapierre.

The Lapierre bikes that Mike’s Bikes are bringing to the Marin market might take the mountain-bike conversation to a new level. Lapierre produces electric mountain bikes. If purists decry electric-assist road bikes, what will they say about electric-assist on trails? (Safety rules and speed limits for all bikes, including electric-assist, apply on trails.)

The Stromer and Specialized premium bikes hit the market in 2014 at between about $4,000 and $6,000. “That’s pushing it for a lot of people,” Martin says. “This year, the technology has improved so much that we can get bikes nearly as good for down in the $2,000 range.” It’s possible to find electric-assist bikes for less, in the three figures, with a bit of searching. Conversion kits are on the market that can transform virtually any bike, from beach cruiser to high-end road bike, into an electric-assist vehicle.

Although the allure of using electric-pedal-assist (and independent throttle control on some bikes) to zip along is enticing, it’s the ability to turn the bike into a true utilitarian mode of transportation that makes modern electric bikes a new breed. With batteries that can run bikes for between 20 and 50 miles, depending on how the bike is set up, riders can comfortably use them for commuting and errands and other daily travel. And bringing along an extra battery extends range to more-than-acceptable suburban ranges.

Provided the county continues to invest in improving its bike infrastructure. Critics who say investing in bike transportation is an unwise use of public money because it benefits only a minority fail to understand the implications of potential bike use. “Electric bikes are a game-changer,” says Marin Supervisor Steve Kinsey. “I’ve ridden a couple of them. They take the hill right out of the equation.”

Kinsey, the Marin representative on the Metropolitan Transportation Commission, has been working to secure state approval for opening an eastbound third lane on the Richmond-San Rafael Bridge. The lane would presumably help ease the congestion that currently stacks up to Highway 101.

Critics of a plan to add a bike lane to the bridge have opened up an argument that Kinsey refutes. The critics say that the bike lane proposal and the plan to open up the third lane have been coupled, making it a ponderous proposition to get approval for the third lane. They say it’s contingent on approval for a bike lane, which would offer riders travel in both directions on the bridge. A barrage of letters to the editor and opinion columns has attacked the coupling of the two projects.

But Kinsey says they’re not coupled. “They can move independently. Obviously they both should be considerate of each other’s requirements,” but the third lane and the bike route are going before the state as separate proposals, each with its own budget, each on its own approval track.

Critics used the proposal to open a bike lane on the bridge as a wedge to attack public spending on the segment of the Bay Trail that crosses the bridge. The critics say it’s ridiculous to spend significant amounts of public money on the bike infrastructure (on the bridge and elsewhere) when a relatively small percentage of the population uses it.

But the critics may be using inadequate information to assess bike use in Marin.

In 2005, a federal transportation bill authorized $25 million to four communities for fiscal years 2006 to 2009. In addition to Marin, Columbia, Missouri; Minneapolis-St. Paul; and Sheboygan County, Wisconsin were the recipients of funds for an alternative-transportation pilot program to test a variety of projects and determine their effectiveness.

In October of 2009, WalkBikeMarin, a recipient of pilot program funds, and the county Department of Public Works released a study that determined that 20 percent of Marin bike trips were part of school or work commutes. Shopping trips and errands accounted for 14 percent of the trips. And 34 percent were “utilitarian and transportation-related.”

Riders surveyed averaged one bike trip 11 days each month, and 11 percent said they used their bikes daily. According to the study report, “If respondents drove alone for these trips instead of bicycling, this sample group would annually account for approximately 5,468 additional vehicle trips. Considering the virtually universal concern with vehicular congestion in the county, that number should resonate.

A Mill Valley to Corte Madera Bicycle and Pedestrian Corridor Study includes a conservative forecast that estimates that 850,000 riders would use a reopened Alto Tunnel each year. Estimates for two other routes between Corte Madera and Mill Valley estimate a substantially lower number of riders. The study considers the increasing numbers of bike riders in the county and forecasts them based on escalating ridership numbers derived from the federally funded non-motorized program.

That number gets put in perspective in the study by considering that it’s “based on the assumption that the volume of bicyclists and pedestrians using the Alto Tunnel would be 80 percent of the projected annual volumes on the Mill Valley-Sausalito Path (1,650,000 trips) and the Larkspur-Corte Madera Path (660,000 trips).”

One of the greatest impediments to increasing bike ridership is a perceived lack of safety along bike routes. If riders don’t feel safe, they will forego their two-wheel options. Providing safe routes will increase ridership, especially with the new breed of electric-assist bikes. Just as that holds true for riding from Larkspur to Sausalito, it also holds true for riding across the Richmond-San Rafael Bridge. With the new electric-assist bikes, riding to Richmond no longer would be a long-haul, thigh-straining ride. Electric-assist makes the ride practical even for older riders, especially with the north-south route that parallels the SMART train route.

Kinsey says that it’s too easy to single out the third-lane issue as an answer to congestion on the bridge and its environs. A comprehensive plan also needs to consider the approaches to the bridge, on both sides of the bay. There’s little practical room—or political will among residents—to expand the county’s highways. “As they become more congested,” Kinsey says, “alternatives are going to become more and more important.” Those alternatives could include extending the Bay Trail across the bridge with a bike lane.

It’s not so outlandish. It follows a state mandate—and a state law—called Complete Streets. AB 1358 mandates that “any substantive revision” of a segment of transportation infrastructure must “meet the needs of all users of street, roads and highways …” And that includes bikes.

Improving bike route infrastructure may be the chicken. Or it may be the egg. Either way, better infrastructure and electric-assist technology could open a door to a new world of alternative transportation—one worthy of investment. Y

Next ArticleTrivia: More than 60 streams flow into Lake Tahoe, but only one river flows out. What is it?