Scared of dental work? A Marin dentist has a unique tool for calming your fears: Kismet, a 13-year-old, toothless Chihuahua. Whether you need your teeth cleaned or a cavity filled, she simply snuggles on your lap and helps relieve anxiety.

Kismet, a dental therapy dog, works for Dr. Cameron Garrett of Corte Madera Family Dentistry. It’s actually a family affair, because his wife, Debra, a dental hygienist, works there, too. The three of them specialize in making patients feel comfortable and relaxed.

“Kismet doesn’t have any official certification, but she’s a special animal in this regard,” Dr. Garrett says.

It may be that she’s empathetic to the patients, since all her teeth were extracted due to periodontal disease. The Garretts use her experience as a cautionary reminder to visit the dentist regularly.

Patty Stanton, a patient, knows that Kismet’s presence keeps her from white-knuckling it in the dentist’s chair.

“I’m very nervous when it comes to needles in my mouth,” Stanton says. “Having Kismet in my lap and petting her gives me something else to think about. It makes me feel calmer.”

Stanton’s not the only member of Kismet’s fan club. Most of Garrett’s patients belong to it.

“I have patients who ask: ‘What days does Kismet work?’ They schedule their appointments accordingly,” Garrett says.

A nine-year-old boy who has required extensive dental work is particularly happy about Kismet. His dental work was a struggle for him before the dental therapy dog joined the practice.

“Now that he’s worked with Kismet, he’s much more accepting and excited about coming here,” Garrett says. “She takes away the anxiety.”

Studies prove that dogs interacting with patients reduces anxiety and stress. Even brief interactions, from five to 20 minutes, have “demonstrated significant reductions in blood pressure” for adults and children, according to a 2018 study at the School of Medicine Center for Human-Animal Interaction, Virginia Commonwealth University. The study further concludes that canine-assisted therapy is “a safe and non-invasive approach to pain management.”

The idea of a dental therapy dog came to the Garretts unintentionally. Perhaps kismet and karma combined.

Four years ago, they adopted a dog named Karma from Muttville, the Bay Area’s senior dog rescue, for Debra’s mother, who had Alzheimer’s disease. Unfortunately, that arrangement lasted only two days and the terrier mix moved in with the Garretts. Instead of leaving her home alone, they brought her to the office.

“People kept asking about Karma, and I offered to let them hold her,” Debra says. “In some cases, it seemed like they needed her.”

Sadly, Karma passed away last year, but the Garretts wanted to duplicate the winning formula. They contacted Muttville and requested a dog with the same qualities: tiny, quiet and cuddly. Kismet, a stray from Hayward, met the requirements. They adopted her in July.

Muttville Executive Director Sherri Franklin wasn’t surprised that Karma, and then Kismet, went to work in a dentist’s office. Senior dogs tend to be calmer and need less exercise. It’s a good match.

“Therapy dogs in doctors’ offices should be a more widespread program,” Franklin says. “They bring so much love and comfort.”

During Covid-19, having a dental therapy dog has been even more beneficial. Changes in safety protocols have added barriers, making some people feel uneasy.

“Patients can’t stay in the waiting room, everything is covered and we’re wearing face-shield masks,” Debra says. “It’s nice to have Kismet bring back some normalcy, make the office friendlier, a little less scary.”

Afterall, it’s the little dog’s job to put a smile on everyone’s face. And, she does. 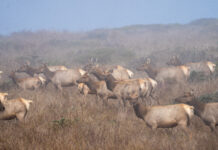