.The Mountain Play’s the Thing

Even off the mountain 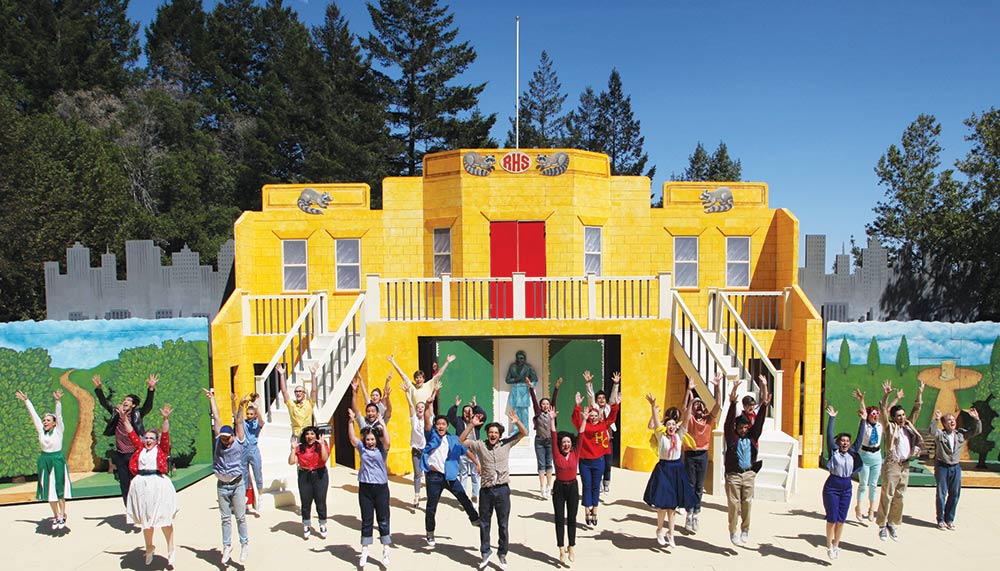 Theater with altitude. That’s a clever slogan for a theater that produces shows 1,900 feet above sea level, but for the Mountain Play Association, it’s more than just a catchphrase to slap on a T-shirt. For the 107-year-old company, the general organizational attitude has always been about elevation (elevated challenges and elevated hopes, elevated expectations and, whenever possible, elevated quality in each annual production), ever since staging a pageant (about Abraham and Isaac) high on Mt. Tamalpais in the summer of 1913.

And then another, the Sanskrit epic Shakuntala, in 1914.

Except for the summer of 1924, when the area was closed due to an epidemic of hoof-and-mouth disease closed the area, and a four-year period during WWII when the U.S. Army occupied the grounds were occupied by the U.S. Army, there has been a Mountain Play production at the Cushing Memorial Amphitheatre every year since. After years of drawing crowds with a mix of pageants and plays and musicals, and at least one stab at Shakespeare, the nonprofit company decided in 1981 to focus on musicals only during the annual five-weekend, May-to-June extravaganza, which now draws thousands of people up the mountain every year. The most recent production was the rock-musical Grease, and the company has announced Hello Dolly as its 2020 production.

“We’re continuing to evolve deeper into the 21st century,” said Eileen Grady, the Mountain Play’s executive director and artistic producer, in between handshakes and speeches at the organization’s grand fundraising Gala at Marin Osher JCC on Nov. 2. “We’re constantly fine-tuning everything we love and enjoy about the Mountain Play. Right now we are working hard to be—if I had to state it in a single sentence—just deepening our roots into the community.”

One of the ways the organization will do that is by co-producing a show off the mountain in the fall. This is a longtime plan for the company, which announced a year ago it would look into turning the Mountain Play into a year-round experience by staging productions closer to sea level, at other times in the year. Thus the current collaboration with the Ross Valley Players, a production of the Christmas-set musical She Loves Me, which opened last weekend at the Barn Theater and runs through Dec. 22.

“We’ve had a strong, collaborative relationship with Ross Valley Players since the 1930s,” Grady said. “For me, coming off the mountain to start doing shows in between the summertime Mountain Play musicals really is about deepening that relationship, and working to build other relationships like it. It’s a little like coming out of the closet—‘Guess what? We’ve been partners behind the scenes for years!’ It really feels good to be out there working together in a way that’s mutually beneficial to both companies, and gives the Mountain Play some visibility in a whole new way.”

Grady just completed her first year as executive director of the Mountain Play, a role she took over from Sara Pearson, who last year, after 12 years at the helm, stepped into a newly created role of director of leadership and development. Grady has been with the company for a number of years as associate producer.

During her after-dinner speech at the Gala, and before offering a stirring and grateful tribute to Pearson—who officially retired this month as a staff member of the Mountain Play—she admitted her first year was quite literally a trial by fire and storm, and continued to call up the concept of gratitude.

“Gratitude is something I’ve been thinking a lot about, because gratitude is the key word for, ‘I survived this last year,’” she said from the podium, to a room full of supporters and donors. “Thanks to the weather last season, we lost our opening weekend performances to rain and pushed through a red flag advisory weekend, complete with a fire on one of those days. I say gratitude because every member of the Mountain Play family, from the garbage crew to the audience, showed up. They were present, they had smiles on their faces, it was beautiful—and I don’t think I said ‘Thank you’ enough, but I don’t know that I ever stopped saying ‘Thank you.’”

A few days later, and one day after her retirement officially took place, Pearson is clear that her commitment to the Mountain Play, and the future she’s worked a dozen years to strengthen, is far from over.

Though she’s technically no longer on staff, she’s been hired as an independent consultant and will focus on major-donor development and support. Of the roughly 5,000 regular supporters and donors to the Mountain Play, the staff considers about 170 of them are considered “major donors.” Pearson says connecting with those folks, having more regular conversations over coffee and the like, will be her primary job.

“These are people I’ve become friends with over the years and I will finally have the time to just sit down and talk to them,” says Pearson, speaking on the phone. “So, retirement isn’t exactly retirement, but for me, this change does have one immediate impact: I didn’t go into the office today. That’s new. Not having to go into the office opens up all kinds of possibilities for me in regards to my love for this organization.”

In many ways, she says, this was the right time, organizationally, for this personal and professional evolution, and her own selection of Grady as her successor was a key element in the progression.

“Eileen is the one thing I’m proudest of when I look back on my years in leadership with the Mountain Play,” Pearson says. “And there are a lot of things I’m proud of, and thankful that I was able to be a part of.”

When Pearson came aboard as executive director in 2007, after several years on the board of directors, there were a number of intimidating landmarks ahead of her. They included the retirement of longtime Director Jim Dunn’s retirement in 2012—after 30 years as the public face of the Mountain Play—followed in 2013 by the 100th anniversary of the Mountain Play, with an accompanying commemorative coffee table photography/history book which Pearson spearheaded. She also led the charge on a comprehensive, strategic Mountain Play plan for 2017–2021.

“To get to that, we went through a huge exercise in planning for the future,” allows Pearson, who has long championed the current drive to expand the Mountain Play beyond a once-a-year, mountaintop event. “The organization is ready for some big things, and I take some satisfaction in helping it to get there, but I do feel I can step away now. We’ve been staffing up, making gradual, calculated changes. We have big dreams, high hopes and big plans; and we have a lot of people in this community on our side—the Mountain Play is ready for the future.”