‘Shazam’ is ‘Big,’ but with superpowers 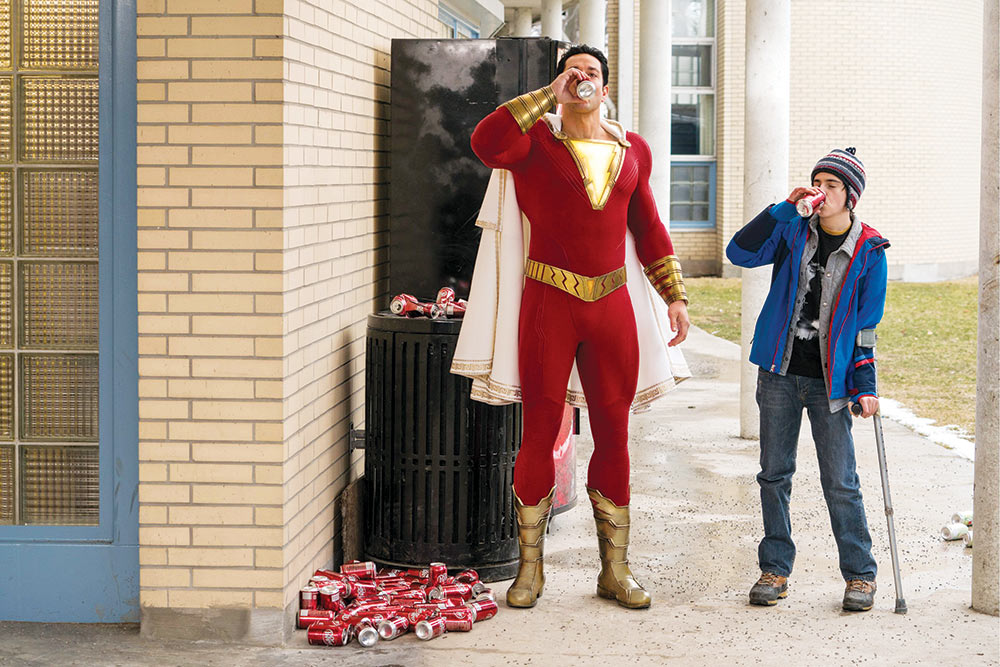 Mostly satisfying, often juvenile, Shazam is a Christmas-in-Easter superhero origin story. It’s Xmas in Philadelphia. Young Billy Batson (Asher Angel) is brought via subway to a grotto wherein a dying wizard (Djimon Hounsou) dwells. He, Ancient Shazam, passes on the powers he has held for centuries, after a long search for a pure-hearted kid. Billy, who has his sorrows as a foster child, comments, “I don’t think there’s anyone like that.” Yet, when Billy utters the magic word “Shazam,” a lightning bolt changes him into Earth’s Mightiest Mortal: a hunk played by Zachary Levi, the Jewish prince physician on Amazon Prime’s original series Marvelous Mrs. Maisel. This new Shazam is a novice superhero who doesn’t even know his own strength, despite the coaching from his foster brother Freddy (Jack Dylan Grazer), a motor-mouthed reject who treasures a bullet flattened from the chest of Superman himself, complete with a certificate of authenticity.

Why this figure is called Shazam instead of Captain Marvel, as he was in the 1940s, is a long and boring story of copyrights easily explained on the Internet. The Swedish director David Sandberg brings a ponderous, antiseptic touch to this adventure with plenty of bonding time between Billy and his new foster siblings. As the youngest Darla, the charming Faithe Herman seems to model her performance on Sally Brown from the Peanuts TV specials.

Playing the evil Dr. Sivana, who pursues Billy in both his forms, Mark Strong goes harshly serious, and thus has neither the chuckling menace of the shrimpy bald nemesis in the comics or anything to differentiate himself from other generic comic book villains lurking about. And he should have had more of a good time, seeing as his character is all seven deadly sins wrapped up in one man.

The wise-ass little kidisms here are fitfully amusing—in his adult form, Billy gets to do the things he’d always wanted, like buying beer and sneaking into a ‘gentleman’s club.’ Ultimately, one wished there had been more bounce and less grit, more of the easy delightful stuff such as Shazam’s saving of a plunging bus, where he ends up cheek to cheek with an almost-victim through the cracked windshield glass. Truly the most fun was the surprise appearance of one of the comic book’s most ingenious villains, which takes place, appropriately for the season, in an Easter egg.