.The Art of Propaganda 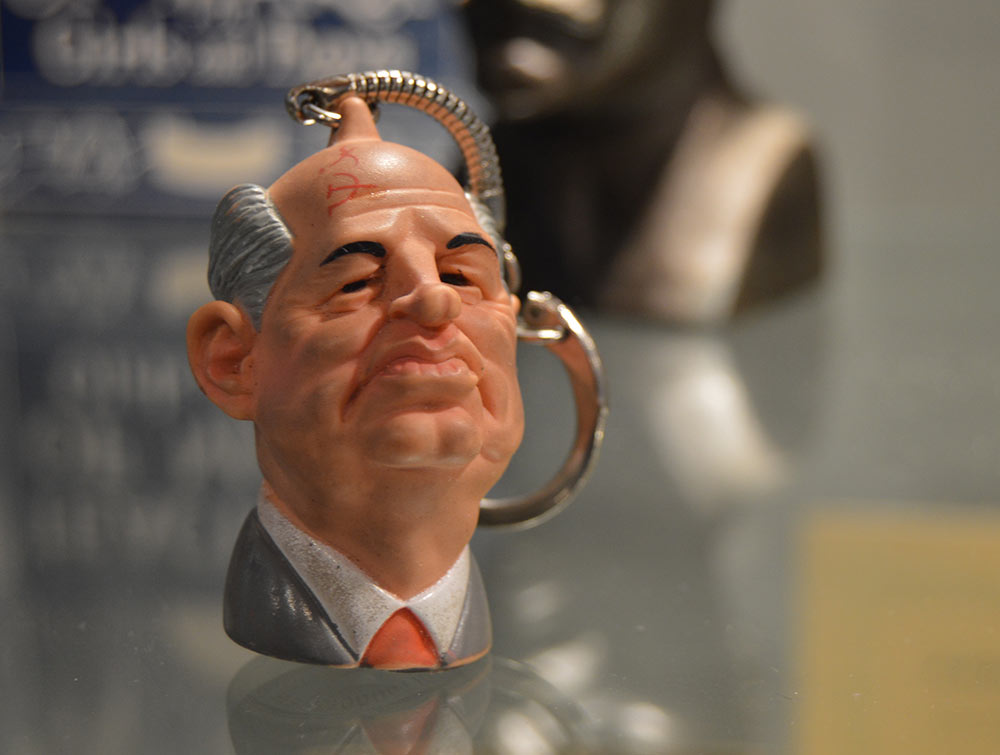 Lilka Areton, director of the Museum of International Propaganda, is seated at her desk hovering over an issue of Der Adler on a recent Friday afternoon in San Rafael. It’s a vintage issue of the German magazine that dates back to the World War II, and she’s visibly stunned at the juxtaposition of content.

As she thumbs through the pages, Areton expresses a kind of knowing astonishment at the magazine. It’s a recent acquisition for the museum, which opened three years ago as an extension of the student-exchange program she and her husband, Thomas Areton, run out of a nearby San Rafael office. Since then, they’ve been dealing with a fan base locally that really wishes they’d devote more time to bashing Donald Trump and his modern-day propaganda-by-Tweet machine.

Areton lets out a few clucks at the pages of the general interest German magazine, which vacillates between celebrations of Hitler’s era and more prosaic celebrations of Christmas in wartime Germany, articles about dance concerts, advertisements selling mundane bits of consumer product to the German people that stood by while Hitler rampaged across Europe.

There’s nothing in these pages, says Areton, that would indicate any of the horrific activities undertaken by the Nazis, no hint of the raging anti-Semitism that helped give rise to Hitler, no sign of any concentration camps for a European Jewry hideously victimized by the Nazis during the Holocaust. She sighs and closes the bound copy that contains several issues of the magazine.

A giant poster of Vladimir Lenin hangs behind the front desk at the museum. The place is itself chock-full of all sorts of engaging political agitprop from nations and regimes around the world, from North Korea to South Africa to Cuba to the Soviet Union. The Chinese Cultural Revolution is on full display, and local artist Patrick Gannon has contributed a painting called Guernica 2017 that’s an amazing reproduction of the famed Picasso painting that chronicled the destruction of the Basque by the Nazis during the Spanish Civil War. The implication from Gannon is that nowadays the chief bomb-hurler in charge has his sights set on Guatemala if not Guernica.

The Pacific Sun last visited the museum in 2016 for a profile of the Aretons and their new endeavor in San Rafael. Three years later, they’ve got a popular weekly movie night on Wednesdays and they’ve added to their growing collection of international propaganda. But they’ve also had to deal with you-know-who.

A lot has happened in American politics since 2016, no? Namely, the elevation of Trump to the presidency of the United States. The Aretons have been engaged with the question of how to grapple with the Trump phenomenon, which arrived in this country with its own set of propaganda markers: The Make America Great Again hats. The Deplorables for Trump T-shirts. Barack Obama’s birth certificate. The plastic straws that read Trump in 2020.

If nothing else, future historians may interpret this era as the moment America fully capitulated to the politics of spectacle, thanks to a convergence of a Trump-struck media, the authoritarian strong-man himself, and the emergence of—indeed, the mass acceptance of governance-as-spectacle.

That style was mastered by Mao, repackaged on Trump’s behalf by Fox News and on full display last week in Congress as Republican defenders of Trump literally took the words right out of Sean Hannity’s mouth in their smear-questioning of Robert Mueller during hearings over
Russian interference in the 2016 election.

But visitors to the museum will find scant evidence that a master propagandist has seized the White House, and that’s by design. The museum, says Areton, has become something of a lightning rod for locals, a place for people to write their own politics on the walls of the museum, metaphorically speaking, to find a place where their political voice can be heard.

Some of them want the nonprofit to go full-throttle anti-Trump. Others, she says, won’t step foot inside because of the cast of characters on display here—Mao, Marx, Stalin.

“There’s a right-wing lady who won’t even come in,” says Areton, because the museum doesn’t offer any critical context or judgment to its intriguing displays from authoritarian regimes and elsewhere. This woman wants to know, says Areton, “Why aren’t you explaining how horrible Stalin was?”

Others come in, she says, and are furious about a piece of racist American WWII-era propaganda that highlights American attitudes toward their Japanese foes during the war: A poster depicts a Japanese soldier as a rat who is about to take the bait on a militarized rodent-trap atop a map of Alaska. The text readers: “Alaska: Death Trap for the Jap.”

But the mainline critique coming from locals is that the museum’s not taking on Trump, she says. The intensity and frequency of the complaint has caused some consternation for the Aretons, who opened their museum as a sort of adjunct to their long-standing student exchange business.

“There are people who come in here who hate Trump with so much vengeance,” she says, her voice tailing off for a moment. “We don’t know how to handle it, to tell you the truth.”

The Aretons, she says, have avoided the politics around Trump as they intersect with their need to run a business and offer a museum that’s fair to history and aims to highlight, simply, that there are many forms that propaganda can take. They are neither Democrat nor Republican, but libertarians, she says, and have stayed away from, for example, displays of religious propaganda. The museum is focused mostly on political figures and movements, and the question hanging in the air is how or if this Trump moment ends, and whether the –ism will outlive the man if he ever leaves office.

That issue, to say the least, has caused some great consternation among Americans savvy to the machinations of propaganda. Thomas Areton’s the executive director of Cultural Homestay International, the couple’s exchange-student program run out of a nearby office on West End Avenue in San Rafael.

Soon after his ascension to the presidency, the museum hosted a show of anti-Trump art, which featured some art that’s still hanging in the museum—in the back of the museum. For that show, Gannon contributed an encaustic painting called “Fractured Flag” in response to Trump’s election.

The county’s general anti-Trump animus was on full display during that show, says Lilka Areton, which featured about 100 paintings speaking out in various ways against the rise of the authoritarianism in the United States. “We didn’t feel the need to have any pro-Trump art,” she says. But nestled in with the anti-Trump contributions from Gannon that remain at the museum, there’s a pro-Trump poster that reads “Defend American Freedom. ‘I Am Gonna Build That Wall.’

Lilka notes that the poster’s could be read as clever anti-Trump propaganda. It’s both ham-handed and sort of amateurish. “Even the pro-Trump propaganda comes off as anti-,” she says with a chuckle.

Areton is a graduate of U.C. Berkeley and the child of a Marxist father who sent her to Russia when she was in her early 20s. She lived in Peru and worked with the Peace Corps; her family was persecuted during the McCarthy era and the experiences left Areton with a fierce libertarian streak that, she says, her husband eventually embraced. Thomas’ mother survived Auschwitz and lived in then-Czechoslovakia under Soviet control. The museum features a compelling side-by-side photo comparison from Slovakia taken before and after the Soviet occupation.

The latter scenes are far more welcoming in that they don’t contain any barbed wire–topped fencing and look like photos taken at a park. There’s also a snip of barbed wire from the demilitarized zone separating North and South Korea, to go along with a few posters of classic North Korean propaganda. But don’t hold your breath waiting for a photo of Trump meeting with his North Korean counterpart.

“We think [Trump] is appalling,” she says, “but we’re not part of the resistance.”

Areton says she could envision a possible show centered on this era, perhaps in five years, but that there’s no consensus between her and her husband about a Trump exhibit that highlighted the propaganda of this era. Indeed, it sounds like there’s some healthy debate going on between the couple about how, exactly, to grapple with Trump, if not Trumpism.

“But maybe someday,” she says.

There’s a question that hangs in the air while one takes in the posters and paintings and ephemera at the museum—the Gorbachev key chain, the Reagan bedroom slippers, the huge Guernica 2017 painting, the vibrant, politically charged posters all conspire to create a sense of kitsch met with a broader culture war that’s raging, if not in the streets then at least online.

The question is generally framed as “Do art and politics mix?” but here the answer is simple: Of course they do.

As Lilka Areton observes, the issue is how do they mix, and to what end. The question of this intersection of art and politics is all the more relevant today as trusted arbiters of propaganda and its devious agenda fall by the wayside, and as a president reaches the heights of spectacle through his dramaturgy by Tweet. Meanwhile, the legendary high-satirical Mad Magazine is in its death throes, the great sixties-era political satirist Paul Krassner has just died—and the Washington Post last week assigned their theater critic to review the “performances” of the various candidates running for the Democratic nomination this year. The paper that broke Watergate is now capitulating to the exact media-president problem embodied by Trump, so notch another victory for the triumph of spectacle. Maybe those Washington Post theater reviews of politics can be part of a future show at the Aretons’ museum, alongside some red MAGA hats.