There’s a new sound coming from the hills of West Sonoma County, courtesy of jazz-fusion quartet Sakoyana, who’ve set their sights on creating largely instrumental and always unexpected compositions that forgo guitars for horns and often wander with joyful improvisation at their live shows.

The band is now finalizing the mixing on their debut full-length album, Indefinite Island, and touring the North Bay with a schedule of over two dozen shows for the next few months, when they’ll travel from Healdsburg to Point Reyes Station, hitting popular clubs and venues everywhere in between.

“Since the group formed, it’s been just drums, bass and horns,” White says. “We all are total music nerds. Sequoia is a classical musician and an incredible music teacher, Josh is a jazz musician by schooling, I am also a jazz musician by education and Danny is totally self-taught, and at this point probably practices more than any of us and plays in something like five bands.”

White and Bowman have musical collaborations going back several years, and after meeting and jamming with Nacmanie and Glum, the four discovered they shared kindred musical interests and quickly bonded in 2018.

“That’s when the four of us really settled as a quartet and the original music started coming,” White says. “We were able to write and arrange for this group of people as opposed to just jamming or playing covers.”

Those original compositions will be heard when Indefinite Island drops in the next few months. Classifying themselves as “avant-funk,” Sakoyana is anything but traditional in their approach to blending their musical styles, crafting tunes that even White admits can get weird during their live performance improvisational tangents.

“We’re all influenced by such a diverse group of artists, musicians and different disciplines,” he says. “Because of that we wanted to write what we felt like playing. Yes, sometimes we’ll certainly surprise people, but I think the most fun is when we surprise ourselves.” 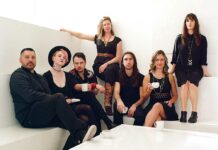