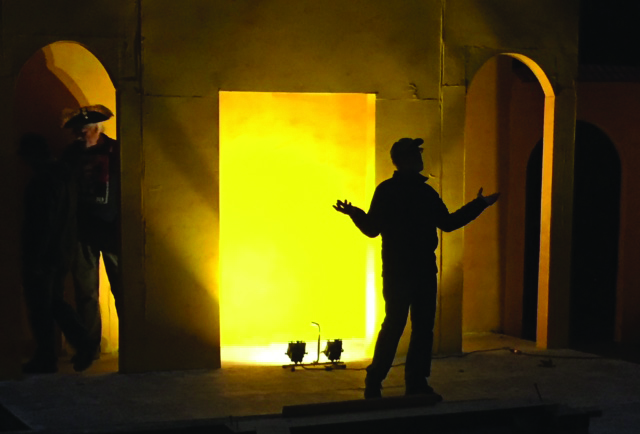 West Marin is full of beautiful surprises—and one of the richest is the upcoming production of Shakespeare’s proto-feminist comedy Taming of the Shrew, a play known for its inexplicable about-face toward the end when the fierce and independent female lead, Katherina, suddenly decides to go along with the assigned role of submissive wife.

A group of local friends give only five performances in this natural setting, with real swallows sweeping above, crows cawing in the surrounding trees and the possibility of fog settling in. Bring warm clothes, and camping chairs for comfort.

Echoes of the Belle Époque sound faintly offstage—St. Columba’s started as the western retreat of the very wealthy Fricke family of New York City in the early 1900s (perhaps the chapel was created for a family wedding?). The natural amphitheater below was restored in recent years and provides one of the best settings for Shakespeare available anywhere.

The cast also includes perhaps the best comedic talent in the bay area since Robin Williams’ demise: Jeff Hoyle, expat Brit and self-described graduate of the Hoyle School of Overacting, an actor with many years of mainstream Bay Area theater under his belt. Hoyle is currently working on another solo piece at the Marsh Theater in San Francisco called Lear’s Shadow.

Director (and co-star) Stephen Horvat pulls detailed funny bits from his talented cast, including arrests by Lilliputian police, played by kids. Horvat also plays the sexist, blustering Petruchio, a variant of his regular onstage personae as lead singer of the satiric country-and-western band the Haggards, world-famous in West Marin for their raunchy, upbeat gigs.

This is a swirling, all-ages family show full of beautiful women, handsome men and smart children; it’s not a company production, but a labor of love by a group of friends.

Howard Dillon is an Irish actor based in Bolinas.

Next ArticleMusic: Respect in Peace