Rep. Huffman’s got a big one at the end of his line. Can the congressman reel it in? 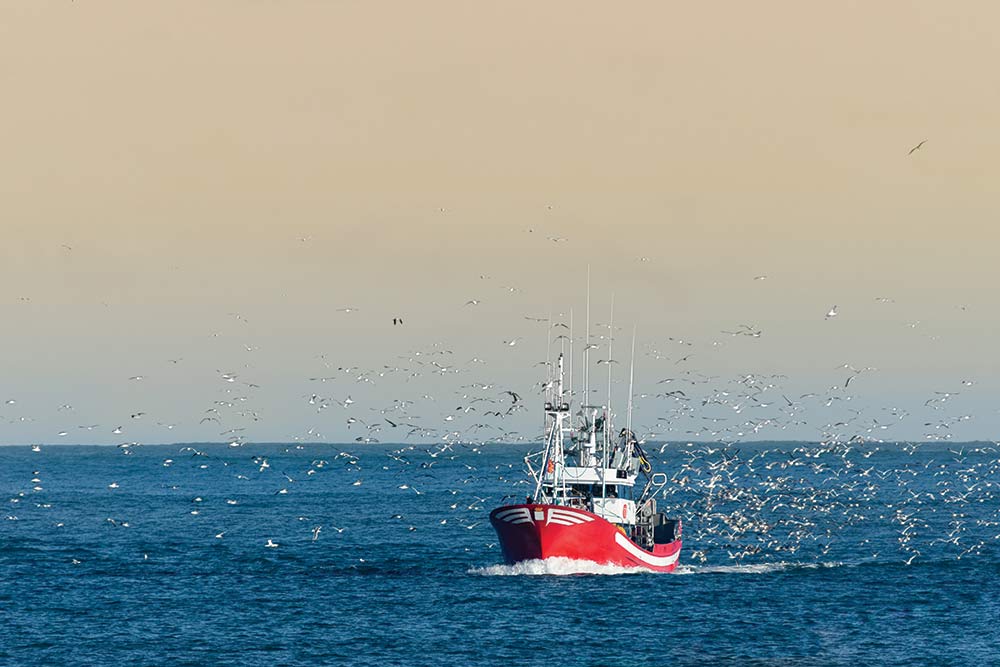 Noah Oppenheim at the Pacific Coast Federation of Fishermen’s Associations has lots to say about a recent move by U.S. Rep. Jared Huffman to get out in front of the reauthorization of a key piece of fisheries law in the U.S.

Huffman’s conducting a national “listening tour” in advance of the scheduled spring 2020 re-upping of the Magnuson-Stevens Fisheries Act. Since its inception in 1976, the act has been the blueprint and broad regulatory guide for American fisheries’ management.

As the recently elevated chair of the Democrat-controlled Water, Oceans and Wildlife Subcommittee in congress, Huffman says his goal is to help manage oceans and fisheries “to be as environmentally and economically resilient as possible.” He’s asking how fish-impacting issues such as global climate change should be considered in a revised Magnuson Act.

But with a White House that denies the existence of climate change, how’s that going to happen?

“You’re asking the right question,” says Oppenheim, who has pondered the issue extensively: How do you effectively insulate an industry from climate-change politics at the highest levels of government, when commercial fishing is a “wholly driven-by-climate-and-the-environment industry and within an administration that denies that such an approach is worthy under any conditions.”

Oppenheim talked to the Pacific Sun this week as the state’s booming 2019 commercial salmon season reopened after a 10-day closure that ended on July 11. It’s booming mostly because of the 2017 rainy season’s beneficial effects on the Sacramento River, says Oppenheim, who’s looking forward to Huffman’s listening tour. He believes it will do a lot of good in getting fishermen to think more globally and outside of the policies undertaken by local fisheries councils created under Magnuson.

Plus, he says, fishermen can be a pretty cloistered lot when it comes to their obvious need to focus on local issues and fisheries. “I think that frankly there’s a ripeness to this need to have a national dialogue,” says Oppenheim.

If he’s sounding a cautionary bell at all around Huffman’s proposed listening tour, it’s that the San Rafael congressman enjoys support from an environmental community that’s aligned with his values.

“He needs to understand,” says Oppenheim, “that fisheries management is about the industry first,” and that the Magnuson-Stevens Act wasn’t intended to shut down the industry but to figure out how to make it work in a manner that’s sustainable for the fish and fishermen alike. With the environmentalist-identified Huffman riding herd over the process, he says, “this will be an interesting dynamic to watch.”

And, he adds, lawmakers should take a very long and hard look at any offshore industry development—including wind farms—as they look at a Magnuson reauthorization. He says external threats to fishermen’s livelihoods—oil and gas rigs offshore, or “terribly poorly sited renewable energy” operations (wind farms) should definitely be a part of the discussion as Huffman and his congressional cohort consider the act next year.

One big problem with Magnuson as currently written, is it doesn’t allow for any regulation of industries that might have a deleterious impact on fishermen’s livelihoods. He notes recent West Coast efforts to start an offshore wind farm program here fail to appreciate “there is no area of the ocean that is sacrosanct except for areas that we have delineated as such.” Even so, he argues, “there are ongoing conversations about developing wind power in the Monterey Bay sanctuary.”

Oppenheim notes that, thanks to the Bureau of Energy Management, which has opened leasing opportunities for offshore wind farms, those industries aren’t required to engage with fisheries or fishermen when submitting their lease proposals. “The problem fundamentally is the federal agency, which has no mandate whatsoever to include fishing impacts,” he says. “Their role is to deal with the industry—there’s no obligation to do an environmental study about user groups who would be impacted until after they’ve gotten the lease. Then the agency will do the environmental report, but by then it’s too late. Right now, that process is the ultimate impediment in equitability in the energy development space.”

Oppenheim also sees room for improvement in the way Magnuson-Stevens addresses impacts on industry to fish habitats, which is to say: it doesn’t.

“It’s weak on fish habitat,” he notes, and envisions a possible future where fishermen could have real leverage over projects that could impact their fishing grounds. “Fishing activity can impact fish stocks, we all know that,” he says. “But we’ve brought back many stocks from the brink,” and California fishermen have, if grudgingly, “throttled back their activities to protect them.” Overfishing is one issue, he says, but it’s “climate impacts and industrial activities outside of fishing that are the biggest impact” on fish stocks.

Oppenheim’s a fisherman himself and knows full well fishermen have themselves been somewhat part of an “anti-science” agenda when it’s suited them—but he also notes they provide lots of data to scientists and regulators. “Fishermen can both be far better observers of ocean conditions and the real-time status of fisheries,” he says, “and simultaneously be in denial over the impacts that broad-scale fishing can have over time.”

But it’s also true that the science isn’t always right, he adds. Scientists have missed the mark when it comes to fish stocks—surveys have been wrong. The bottom line for Oppenheim when it comes to fisheries management is that “we’re doing better than we ever have in the past,” though there’s much to be done. He believes the “ship can be righted to some extent by bringing in the fishermen,” especially small-scale operators. “One of the more interesting things to note about fish politics is to notice how ‘flipped’ it is,” he says. “The quote-unquote ‘liberal’ politics of egalitarianism and support for communities” has not been the traditional Democrat approach, he argues.

At the same time, conservative lawmakers pegged with being too pro-business at the expense of the environment, he says, have in fact led the charge to focus on localities and small-time operators.

“Fundamentally, liberals should be about supporting communities,” he notes as he pines for a post-partisan fisheries management debate and hopes Huffman’s got his game on for it. “Partisanship in fisheries is terrible, counterproductive and we’ve been seeing too much of it lately.”