By Will Carruthers and Chelsea Kurnick

Over the past three weeks, conversations around policing in America have shifted drastically. Suddenly, defunding law enforcement has become a regular part of the public conversation, just ahead of meetings in which many governing bodies will review proposed budgets for the fiscal year, which runs July 1 to June 30 throughout California.

The issue came to prominence following widespread protests against police brutality and racism that started in Minneapolis after videos of a police officer killing George Floyd, a middle-aged Black man, went viral online. Since then, those conversations have become local in cities throughout the country.

While there aren’t yet answers regarding what reforms or structural changes will be enacted in the weeks and months to come, it’s worth giving some context to the current conversation.

Reform vs. Defund vs. Abolition

The logic behind reforming and defunding is very different. Reform means that the larger system is left largely unchanged, while defunding—or abolition—means that the money goes elsewhere, potentially leading to increased funding for social services.

On Wednesday, June 10, mayors and law enforcement officials from nine Sonoma County cities announced a range of planned actions in response to the widespread Black Lives Matter protests. The local officials, in line with many other elected officials across the country, presented a range of reforms.

Rubin Scott, director of Santa Rosa’s NAACP chapter, spoke at the press conference. On June 11, he shared a letter he had sent Mayor Schwedhelm on June 6, which called on Santa Rosa to invest in #8toAbolition rather than #8CantWait.

8 Can’t Wait is a project that pushes police to adopt eight policy reforms to reduce police brutality. Launched in response to the killing of George Floyd, 8 Can’t Wait is a project of Campaign Zero, an organization that has been pushing for police reforms since 2015. Campaign Zero claims that these reforms would reduce police killings by 72 percent.

In response to 8 Can’t Wait, a group of police- and prison-abolitionists formed 8 to Abolition, listing eight strategies that seek to replace police and prisons with communities that are “equipped to provide for their own safety and wellbeing.”

Proponents of 8 to Abolition say that Campaign Zero’s claim of a 72-percent reduction in police killing is neither accurate nor enough. In a statement by Los Angeles Community Action Network (LACAN) and Black Lives Matter LA, they write, “#8CantWait offers a relatively easy way for police departments and government officials to appear to embrace the idea of reform without actually changing the structure of policing and without confronting powerful political interests like law and order advocates and police unions.”

Scott’s letter notes, “when we use the terms ‘dismantle and defund’ in no way are we saying there should not be law enforcement or policing agencies or we should not fund these institutions. We are saying that the current legal system as well as other systems governing Black Americans, that are funded by those same Black Americans being denied their civil liberties, need to be dismantled and reinvented.”

Scott calls for many changes, including a stronger community oversight committee which would be active in credentialing law enforcement officers every two years, community housing development for 18-to-24-year-olds, an increase in Parks and Recreation centers, and vocational training for high school students not interested in college.

Oakland-based abolitionist organization Critical Resistance says that more than 50 years of organizing for stronger civilian oversight committees has not resulted in any committees that are actually empowered to make decisions about police actions, and ultimately such committees “entrench policing as a legitimate, reformable system with a ‘community’ mandate.”

After a Sonoma County Sheriff’s Deputy shot and killed Andy Lopez in southwest Santa Rosa in 2013, activists put pressure on the county and city of Santa Rosa to enact reforms and establish oversight.

In 2015, the Sonoma County Board of Supervisors established the Independent Office of Law Enforcement Review and Outreach (IOLERO), a body meant to review complaints against the Sheriff’s Office among other tasks. IOLERO, which was one of many reforms recommended by the Community And Local Law Enforcement Task Force, a group formed by the county after Lopez’s death, has never been as strong or well-funded as local advocates hoped it would be.

More recently, those advocates, including IOLERO’s former director Jerry Threet, have been pushing to add a ballot measure to the November 2020 ballot that would empower IOLERO to subpoena records from the Sheriff’s Office and lock in IOLERO’s budget at one percent of the Sheriff’s total budget.

Over the past four years, even with IOLERO in place, reform of any kind has been painfully slow, according to activists.

The use of the carotid hold, a procedure in which an officer places a subject’s neck in the crook of their elbow, is one example of the relationship between the Sheriff’s Office and IOLERO. Despite a recommendation from IOLERO Community Advisory Council (CAC), a group of volunteers who spend time researching policies and interacting with the community, the Sheriff’s Office resisted giving up the technique until two weeks ago.

If performed properly, the hold restricts blood flow to the head and the subject passes out. If done incorrectly, the subject can be killed or seriously injured due to a prolonged lack of blood flow or airflow if the officer’s arm slips into an “arm bar” position.

The CAC spent over a year crafting numerous proposed changes to the Sheriff’s use-of-force policies. They formally submitted the policy recommendations last November, just two weeks before a Sheriff’s Deputy attempted to use the hold—along with a Taser and blunt force—on David Ward, a Sonoma County resident.

Ward was pronounced dead at the Petaluma Valley Hospital shortly afterwards. An autopsy released in May concluded that his death was a homicide primarily caused by “Cardiorespiratory Collapse, Blunt Impact Injuries, Neck Restraint and Application of Conducted Energy Device.”

In its response to the CAC’s recommendations last December, the Sheriff’s Office dismissed the need to stop using the hold pending more research.

“In order to truly consider this recommendation, we would need to see data that supports the assumption the carotid restraint and maximum restraint are unreasonably dangerous when applied appropriately,” the Sheriff’s Office wrote of the carotid-hold recommendation.

Then, on the afternoon of Friday, June 5, a note appeared on the Sonoma County Sheriff’s Office’s website. “Effective June 5, 2020 the carotid hold is no longer authorized. Policies and training are being updated accordingly,” a line at the top of the Sheriff’s Policies and Training web page stated.

Oversight efforts in Santa Rosa have run into their own problems. In early 2016, the city hired Bob Aaronson, a Palo Alto attorney, to audit the Santa Rosa Police Department.

Then, in late 2018, after a public disagreement with Aaronson about the scope of his work, the city and Aaronson parted ways. To date, the city has yet to hire another police auditor.

Police are often called upon as first responders in non-criminal situations including mental-health crises. Many calls to defund the police look to free up funds to instead support alternative methods of crisis intervention. Some reformists propose strengthened partnerships between police and specialized professionals such as trauma-informed social workers.

San Francisco recently announced that their police department will stop responding to non-criminal calls and will be replaced by trained, unarmed professionals. This concept is not novel—White Bird Clinic in Eugene and Springfield, Oregon have operated Crisis Assistance Helping Out On the Streets (CAHOOTS) since 1989. This non-police, 24-hour mobile crisis intervention service operates through a dispatcher and sends a team of one medic and one crisis worker to provide immediate stabilization to people in need.

In 2019, MST expanded their police partnerships to reach some areas of West Sonoma County. Their service does not extend north of Windsor.

Unlike CAHOOTS, Sonoma County’s MST operates in close partnership with local police departments. A civilian in need cannot call to request that the MST be dispatched; the police themselves make the assessment that MST’s services would be of use.

During the Healdsburg City Council meeting of June 15, 2020, Healdsburg Police Chief Kevin Burke presented ideas to the community for experimental police reforms that grew out of a recent conversation he had with the Criminology Department at Sonoma State University. Among his proposals, he pushed for hiring a licensed clinical social worker (LSCW) who would work for the Healdsburg Police Department.

While Chief Burke stressed the value that a social worker’s training could add to community policing, he said that he believes such change must happen from within the police department, rather than outside of it. 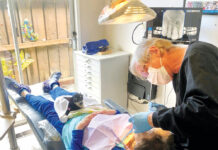