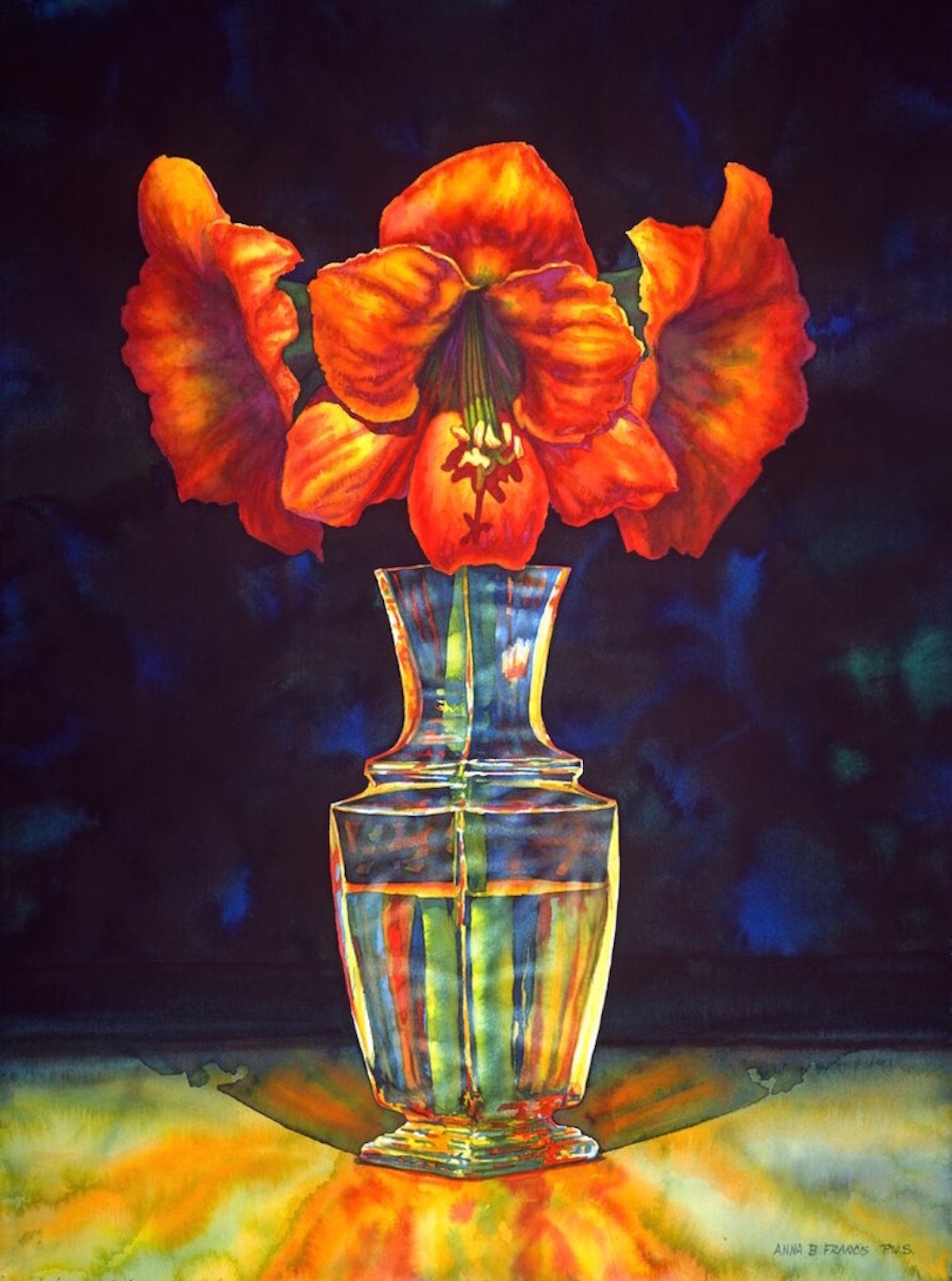 Veteran artist and educator Anna B Francis has lived in Point Reyes Station for more than a decade, though there are still some neighbors who didn’t know she was an acclaimed watercolor and oil painter until they saw her work hanging at the gallery at Toby’s Feed Barn earlier this month.

“I’ve been in three shows since I came out here (in 2008), but this is the first time I’ve exhibited this whole body of work in California,” Francis says. “Since I really haven’t exhibited out here much, there are people I’ve known over the years who didn’t even know I did this sort of thing.”

On display for in-person viewing, “The Art of Anna B Francis” is the artist’s first-ever retrospective exhibit and features more than 60 works spanning 40 years of her career in art and education. Portraits of flowers, people and more hang on the wall at Toby’s during the essential store’s open hours, and the show will remain up until June 30.

Francis is a lifelong artist, who discovered the talent and the passion as early as kindergarten. An East Coast native, she received her Master of Fine Arts Degree from Syracuse University and her Bachelors Degree from University of Kentucky. She also attended the Art Students League, the School of Visual Arts and Parsons School of Design while living in New York City between 1979 and 1982.

“The idea of teaching came about when the book was in the process of coming out,” she says. “I wanted to teach children’s picture book illustration. I was also interested in teaching watercolor because I am self-taught.”

She first taught at the Silvermine Arts Center in Connecticut, where she led classes in drawing and children’s picture book illustration. Over a 24-year teaching career, Francis instructed over 2,500 students; teaching drawing and watercolor at Longwood Gardens for 15 years, teaching oil painting as an adjunct professor at Villanova University, and offering classes and workshops at several other institutions.

In her own artwork, Francis is a master of color. She draws her portraits of people with realism in mind, while her floral portraits take much more artistic license.

“In the people-portraits I focus on accuracy and recognizable likeness, my work on those portraits are close to life-size,” she says.

All of her people-portraits were drawn from live models, except for two pieces in the show. One is a dog portrait, and the other is a recreation of a baseball card of then-Mets player Darryl Strawberry.

“I was commissioned to do that by one of my teachers in my Masters Degree program, Murray Tinkelman,” Francis says. “Murray was putting together a show called ‘The Artist and the Baseball Card.’ He gave me a couple of baseball cards of Darryl Strawberry. I did some drawings, and then I saw him on TV and said, ‘these cards don’t look anything like him.’”

Living outside of New York City at the time, Francis drove into the city to rent VHS tape of “Let’s Go Mets,” the team’s official theme song, and paused the tape on Strawberry to get a more accurate look, despite the static lines on the VHS freeze-frame.

That painting traveled around the country for many years on exhibition, and in the spirit of baseball cards, Francis traded the piece to Tinkelman, a famous sci-fi and fantasy illustrator, in exchange for one of his drawings. The Baseball card piece in the show at Toby’s is a recreation of that original artwork.

For her floral art, Francis is big on color. She’s actually a color expert, having developed her own color wheel while teaching at Longwood Gardens in Pennsylvania, and she has taught color theory. Like her people portraits, many of the floral portraits are also very large pieces, with the largest being over 6 feet tall and 4 feet wide.

“I actually wrote an article for The Artist’s Magazine on how to paint large watercolors,” she says. “They titled it ‘How to Paint Large Watercolors with Ease,’ which isn’t really true—but I wanted people to know how to do it.”

Francis’ preferred floral subject is the Amaryllis, a flower that boasts large bulbs on top of leafless stems. Francis paints her flowers with saturated watercolors, giving them a lush spectrum of color.

“I liked Amaryllis because they were easy to grow in the winter, and at the time I was living in New York, and because they would change like a live model,” she says. “They just seem to have a lot of personality to me.”

Francis has a series of Amaryllis portraits she calls “Conversations,” in which she paints the flowers as if they are in various stages of interaction with each other or the viewer. Many of those pieces are part of the retrospective exhibit.

The show also features other artifacts, such as reproductions of her children’s book.

The retrospective was meant to be up in April, though Marin County’s shelter-in-place orders in March delayed the exhibit until now.

“People are very serious about sheltering-in-place, and of course that’s good,” she says. “But, Point Reyes is a very artistic and creative community, so the show has been a huge hit here locally. People have gone two or three times because they can go and see some art, and it’s been a wonderful personal experience for me to see people happy about it; that was the real major purpose of it.”

Charlie Swanson
Charlie Swanson is a North Bay native and an arts and music writer and editor who has covered the local scene since 2014.
Previous articleCars honk in front of supervisors’ homes
Next articleMore North Bay Summer Camps Are Going Online

Marin Center Marks the Spot for TreasureFest This Summer