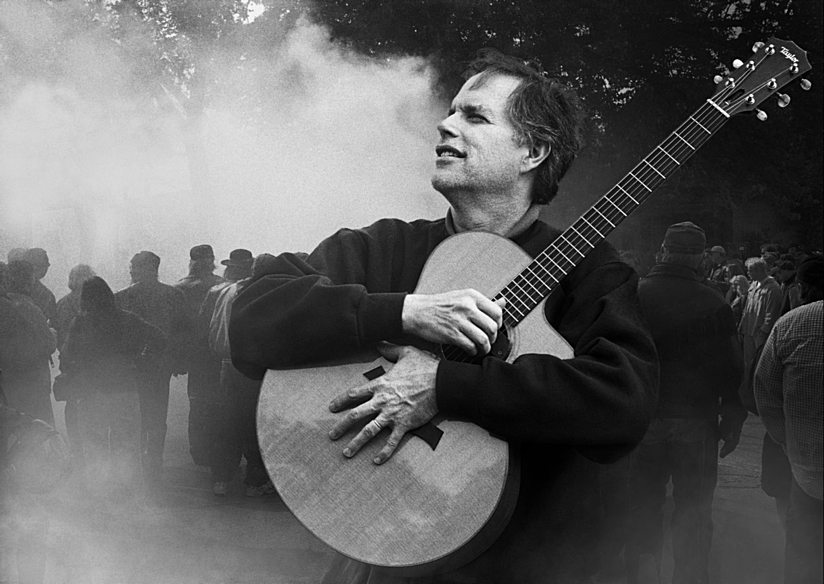 You might expect to find insights into guitar-playing on Leo Kottke’s website—after all, Kottke is one of the heirs to American primitive guitar pioneer John Fahey and an inspiration for such next-gen solo-guitar improvisationalists as Kaki King.

What you’ll find is an essay on Kottke’s brief stint as … a trombonist—a tome that captures the artist’s pithy, self-deprecating wit.

“Studying with three teachers in three years, I was a trombone student in Oklahoma until I was about 15 years old,” he writes. “Each weekend at one of their houses I’d wait in the kitchen until the trombonist in the basement would yell up at me to come down—they all taught in their basements.

“I would descend, assemble my horn, sit in a folding chair, park my sheet music on the stand, weather some insult aimed at my embouchure, and play whatever I had not been studying for the last week.

“My teachers—industrious, frugal, starving men—had one thing in common other than my unpreparedness: they’d all installed do-it-yourself showers in those basements. These units stood in some corner, usually my corner, and they’d drip … ploink, ploink.

“There was nothing more ominous than basements with leaking showers in them, and there was no telling when fear began, but my trombone kept those home improvements at bay.

Of course, this sort of humor is to be expected from a musician who in the liner notes to his landmark 1969 album 6- and 12-String Guitar, released on Fahey’s Takoma label, likened his playing to “geese farts on a muggy day.”

The Georgia-born Kottke developed his love for Americana while moving a dozen times as a child. And he developed his precise fingerstyle-guitar-playing while absorbing the country blues of Mississippi John Hurt. Over the years, he’s released a string of critically acclaimed albums, mostly solo guitar, sometimes singing, sometimes not. But there have been exceptions: His 1991 album Great Big Boy, produced by Steve Berlin, who also provided band arrangements, featured guests Lyle Lovett and Margo Timmins of the Cowboy Junkies. On 2005’s Sixty Six Steps, his last album, Kottke teamed up with longtime collaborator and ex-Phish bassist Mike Gordon.

Despite his decade-long hiatus from the recording studio, at 69, Kottke continues to do what he has done for decades, playing the role of traveling troubadour, rambling from city to city with an acoustic guitar and a good reading book, taking to the stage and holding the audience’s rapt attention with wit and steel-string wizardry.

What more can you expect from a guy who holds a Certificate of Significant Achievement in Not Playing the Trombone from the University of Texas at Brownsville with Texas Southmost College?

Ask Greg about his Certificate of Significant Achievement at [email protected]

This week in the Pacific Sun

Letter: ‘You cannot have vaccination that works, yet doesn’t work …’