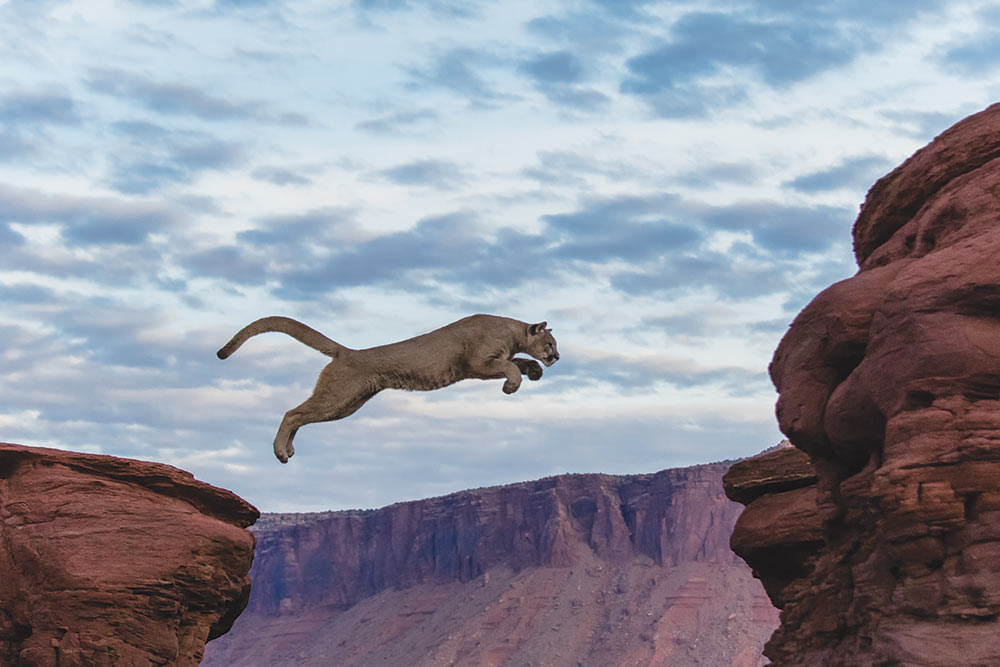 Mountain lion heads to Macy’s in Santa Rosa—what’s it all mean?

Santa Rosans woke up Monday morning to a circling helicopter and news that a juvenile mountain lion was spotted camping out under at bush near Macy’s downtown at the Santa Rosa Plaza.

Headline machines cranked up around the North Bay to describe the peculiar phenomenon—“Mauled at the Mall!” was one headline we were glad to not see—as the animal was quickly tranquilized by the California Department of Fish and Wildlife, who said the animal would be released back into the wild. A leading theory from state officials and was that the animal had found its way to Santa Rosa by following the city’s namesake creek downtown, or via the Manzanita creek.

“We’ve had a lot of interest and a lot of the public connecting with us about the mountain lion in the mall,” says Dr. Quinton Martins, director and principal Investigator with Living with Lions, which tracks the animals’ presence in the state. The sighting of large wild animals juxtaposed in urban environments is not a new story in the North Bay, but it does have a new twist. Multiple online resources devoted to the life and times of apex predators, not to mention California environmental organizations, have noted an uptick in the number of animals loping into urban areas in recent years—mostly due to their habitats being squeezed by development or, as the case may be, a year-round fire season that’s seen beasts of all size and dimension fleeing the flames for un-scorched earth.

“It’s funny that it takes a mountain lion to go shopping at Macy’s to get people really aware of the fact that we are living with lions,” says Martins, who says the cat was given an ear tag to track it, and that its DNA was collected for testing before it was released. He estimates the cat to be between eight and 10 months old and says his organization will now try to figure out where it came from and see if it’s related to any of the other 17 cats the Living With Lions is tracking.

A posting on the mountain lion-loving site knowyourneighbors.com was characteristic in describing the phenomenon that hit home this week in front of the big-hands sculpture at the Santa Rosa mall: “As mountain lion habitat becomes more fragmented, dispersing young mountain lions often find their way into urban areas by accident. Urbanization and habitat fragmentation disrupts the natural dispersal landscape, and reduces the amount of available territory for dispersing young.”

That site, among others, shares some recommendations on how to deal with the arrival of mountain lions, should the jarring visit to the mall this week bespeak a trend: keep the pets locked up, not to mention the goats and sheep, and other vulnerable animals, from dusk ’til dawn.

All we really know is that the mountain lion was spotted at around 9am, and by 10am life had returned to normal on the corner of 4th Street and Avenue B. It was an hour that will live on, in infamy, and in the imaginations of Santa Rosans mesmerized by the bizarre spectacle. We anticipate that a limited-edition Mountain Lion Malt Ale to emerge from nearby Russian River Brewery any day now, to commemorate the occasion.

But there’s a larger “what’s it all mean” storyline here that’s of a more spiritual question in search of an answer. While rare in Santa Rosa, mountain lions do appear on occasion in West Marin and especially in the Mt. Tam watershed—and when it happens, folks out in unicorn bush country tend to be both freaked out and spiritually awestruck at the sighting.

The Marin Municipal Water District reports on its website that the agency’s “watershed management staff occasionally receive reports of mountain lion sightings on Mt. Tamalpais Watershed lands. These sightings are not cause for alarm, but the district recommends that visitors to public lands follow the mountain lion precautions provided by the California Department of Fish and Wildlife.”

Those precautions include deer-proofing one’s home, never hiking or jogging alone, refraining from leaving pets or small children outdoors unattended, and to “acknowledge that you live in mountain lion country and make a commitment to educate yourself.”

For all the caution recommended, it’s also helpful to educate oneself about the mountain lion’s heavy symbolism for the spiritually inclined, especially since Fish & Wildlife says that “mountain lion attacks on humans are extremely rare,” and that the animal is likely more scared of the humans it encounters than vice versa.

As a spiritual matter, for example, the noble animal pops up in Jimi Hendrix’s “Voodoo Chile,” right after the moon turns fire red and Jimi’s gypsy mother drops dead upon seeing the dread spawn she’s just birthed. Abandoned to his fate, like Moses, Jimi sings, “Well, mountain lions found me there waiting, and set me on an eagle’s back.”

Hendrix was part Cherokee, and First Nations folklore holds the mountain lion in very high totemic regard; the animal is conferred the status of “magical sun dancer,” and one of the bits of wisdom that pops up on sites devoted to animal symbolism is that if a mountain lion should appear in your cosmology, at your local mall or atop your local mountain, its message is that the human beings who engage with it must “find the balance between freedom and maintaining boundaries.”

In life as in redevelopment, that’s a message with some real poignancy. It’s especially wise counsel for a North Bay now under an intensive rebuilding regime after the 2017 wildfires wiped out five percent of the housing stock in Santa Rosa—a rebuild that’s met with increasing housing unaffordability for an underpaid North Bay workforce from Larkspur to Cloverdale, not to mention an anticipated population spike in coming years up and down the Highway 101 transit corridor to San Francisco.

Those “boundaries” alluded to by First Nations people are presumably inclusive of the locally legislated “urban growth boundaries” that have kept the North Bay from morphing into a gigantic sprawl with even less wild space to accommodate the occasional beast that wanders into town to check out the sale at Macy’s. Organizations including the Sonoma Land Trust have put a emphasis on maintaining, or developing, so-called “wildlife corridors,” around the region to mitigate against any local destruction of animals’ traditional rangelands at the hands of, for example, expanded vineyard footprints and the like.

Any time a big animal shows up downtown, it’s serious business—a potentially dangerous animal on the loose in a populated area. And, while mountain lion attacks on humans are rare, they do occur. After a mountain lion killed a bicyclist in Washington State, in 2018, the Mercury News reported that it was only the sixth fatal mountain-lion attack in the country over the preceding 25 years; three of the attacks occurred in California, the paper reported.

But if this episode is repeated, Fish & Wildlife recommends that you fight back like it’s Black Friday and you’re beating off fellow shoppers to be first in line for the Christmas sales at Sears. “Research on mountain lion attacks suggests that many potential victims have fought back successfully with rocks, sticks, garden tools, even an ink pen or bare hands,” the state reports. “Try to stay on your feet. If knocked down, try to protect head and neck.”

Healdsburg State Senator Mike McGuire is hosting a hearing this Friday, May 3, that’s devoted to the prospects for offshore wind energy in the region and how it may impact California fisheries.

Earlier this year we reported on a push to develop wind farms off the Humboldt coast that’s been generally supported by California coastal electeds ranging from U.S. Rep. Jared Huffman to McGuire himself (“Full Tilt,” Feb. 27). McGuire is Chair of the Joint Committee on Fisheries and Aquaculture and says in a statement that he’s calling the meeting to take a close look “at any potential environmental impacts it could have on our state’s fisheries.”

The hearing is being presented as a question in search of answer that’s already been answered: “California’s Fisheries and Wildlife: Can they co-exist with Offshore Wind Energy Development?”

The answer appears to be, “They’re going to have to figure out a way to co-exist,” given McGuire’s support for offshore wind farms, which are increasingly being presented as a fait accompli, given the state’s robust push to go all-renewables by 2045—and by the federal Bureau of Ocean Energy Management initiating an offshore-leasing program in 2018.

Earlier this year, the American Jobs Project, a Democratic-leaning nonprofit think tank founded by former Michigan governor Jennifer Granholm, issued a white paper in support of two wind farms under consideration—one at Morro Bay and the aforementioned Humboldt County coast—and said that a combination of federal leases and state interest could see the first offshore wind farm leases as early as next year.

Coastal congressman Jared Huffman signaled support for a locally based wind energy project run by the Redwood Coast Energy Authority (Humboldt’s communitychoice aggregate), as he noted its potential benefit to Sonoma and Marin counties, both of which have their own CCA’s, Sonoma Clean Energy and Marin Clean Energy. Those entities purchase renewable energy from solar and wind farms that are often many miles down the electric wire from the point of consumption. Huffman says offshore wind in Humboldt could be of service to those CCAs, given that “there’s way more energy potential than there is demand,” in Humboldt County.

McGuire notes in his statement that “the burgeoning Pacific offshore wind energy industry is going to be a critical component of our state’s energy supply,” as he highlights the need for input from fisheries experts in advance of any leases.

As we reported last month, offshore wind projects on the East Coast had a traditional base of opposition driven by the fishing industry’s concerns over the tethered windmills’ potential impact on their gear and on their traditional fishing grounds.

Those concerns gave way over time, and the nation’s first big offshore wind-farm went online off the coast of Rhode Island in 2016. As we reported in February from the department of irony, Fishermen are now using their boats to haul “eco-tourists” to the site to check out the windmills, whose blade-span is more than the length of a football field and quite impressive to behold.

Friday’s meeting is taking place up in Eureka from 11am to 2pm and will be live-streamed via the state’s Joint Committee on Fisheries and Aquaculture online portal. Speakers are coming from a range of shareholders—including the BOEM, the California Coastal Commission, representatives from the windmill-energy industry, the National Resources Defense Council, and several organizations representing fishermen’s interests. They may be tilting at windmills.