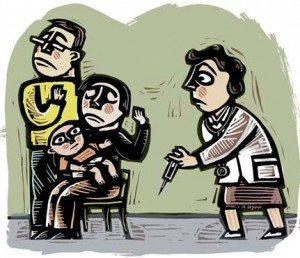 Letter: ‘It gets more disturbing …’

And now for something completely different …

As a constituent, parent of a vaccine-injured child, registered nurse, independent researcher, historian, truth-seeker, libertarian, author and more, I feel the human obligation to inform you of the grave dangers we face.

It is common knowledge that the pharmaceutical industry is among the most influential lobbies in the world. Can’t you see? It’s just as many ostracized health care professionals have stated for decades, some of which have mysteriously died! The wide array of possible vaccine injuries do in fact generate huge pharmaceutical profits on prescriptions for those vaccine injuries, often lasting a lifetime! While it all began with a well-intentioned discovery by Jonas Salk, it has since became the means by which a mega industry compiles enormous profits by disrupting the natural biology of a rapidly expanding human population. It is by design. Stay with me. It gets more disturbing.

So how is it that we blindly submit to the barbaric practice of piercing our primary protective barrier (skin) to inject the same disease it was intended to prevent? We abort all sense of logical rationale in the name of science. Hijacked science. Mad science. Science that resembles a watered down version of the Nazi eugenics program. But, of course, the entire U.S. medical and scientific community is directly rooted in the former Nazi Germany. A once brilliant intelligence operation to obtain scientific superiority has gradually transformed our entire nation via fear-based propaganda.

Operation Paperclip in 1945 permitted 1,500 Nazi scientists to escape Germany post-WW II. Scattered throughout various U.S. government agencies including the CDC, FDA, AMA, NASA, military industrial complex and more, our nation has become completely infiltrated by the very secret societies that John F. Kennedy warned us about 52 years earlier. And, yes, it is common knowledge nowadays that the CIA paired with organized crime to conspire and assassinate JFK. The most compelling documentary in my search among the dozens that expose the outrageous findings of the Warren Commission is titled, “JFK to 9/11, Everything is a Rich Man’s Trick” on YouTube. Within, you’ll also learn all about the Bush family ties to this Nazi agenda. Yep, for decades we’ve been so deceived on the grandest scales that we’ve elected these very secret society members as president, twice!

Bottom line—if you’ve also been bought out, I don’t expect you to possess the spine to be honest with the people you supposedly represent. If you’re open-minded and genuinely concerned about the future of humanity, you’ll take the time to truly educate yourself, validate everything included above and act accordingly. It’s your conscience. It’s our nation and our race. Shall we call it “herd survival” since “herd immunity” is literally poisoning mankind?

Anonymous citizen in a growing state of tyranny

Pacific Sun
The Pacific Sun publishes every Wednesday, delivering 21,000 copies to 520 locations throughout Marin County.
Previous articleLetter: ‘The medical industry is the third leading killer of Americans …’
Next articleBest of Marin 2015: Car services