.Guide Dogs for the Blind 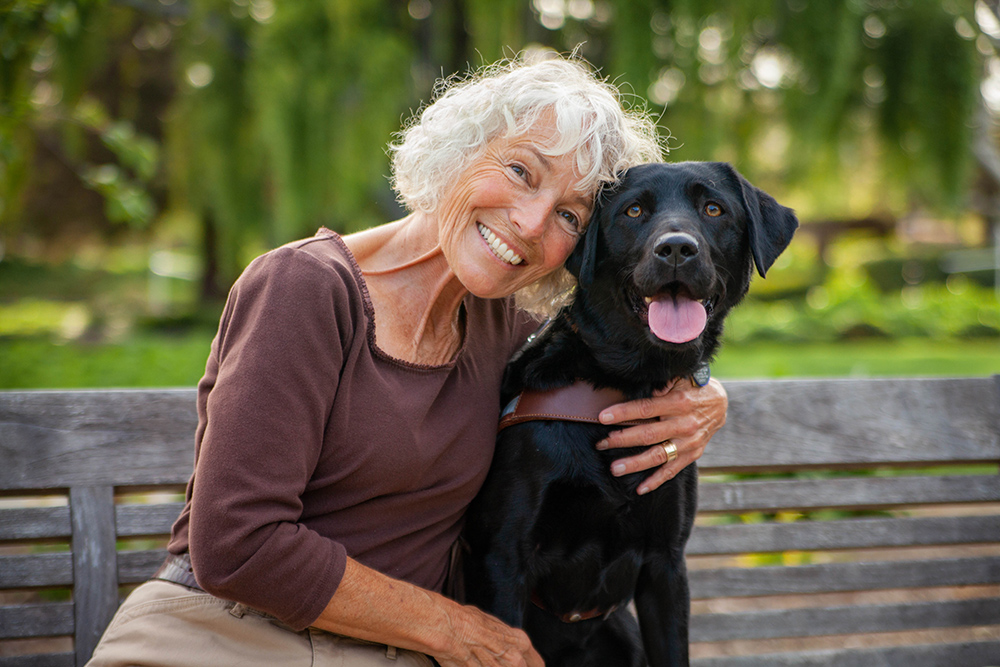 There are a lot of dog lovers in the North Bay, to be sure, but the folks at San Rafael’s Guide Dogs for the Blind take things to another level. More than an industry-leading guide-dog school, the nonprofit has spent 76 years serving blind or visually impaired clients—free of charge—and has inspired others around the world to follow their lead.

Established in 1942, the school serves clients in the United States and Canada, and is the largest guide-dog training organization in North America. Consisting of two 13-acre campuses, one in San Rafael and one in Boring, Ore. Guide Dogs for the Blind (GDB) breeds 900 puppies a year, and trains and graduates 320 teams of dogs and their clients annually under a rigorous program that has made them worldwide leaders in the field.

“People from all over the world come study our methodologies,” says Benninger.

Those methods include positive reinforcement training, a concept pioneered by the Humane Society and adopted by GDB 15 years ago.

The first dog-training methods came from the military, where punishment was used as reinforcement. Not so anymore. Guide Dog for the Blind’s positive reinforcement is so successful, in fact, that the 24-week training cycle has been reduced by half, to a 12-week cycle with an even higher success rate, “because the dog’s spirit is not being broken,” Benninger says.

While the training may last only three months, the process for the dogs starts when they’re three days old, when volunteers called “cuddlers” sit with moms and puppies. “Our dogs from the earliest age possible are marking on people,” says Benninger.

After receiving intensive socialization, the pups are sent to one of 2,000 puppy raisers located in 10 Western states to learn house manners and basic skills like walking on a leash and heeling. They come back to the campus when they’re between 14 and 16 months old, and enter the 12-week training process.

Recently, GDB was the subject of the documentary Pick of the Litter, which followed five guide dogs from birth through graduation. Anyone interested in GDB should watch the film, and North Bay residents who want to see some dogs in-person are welcomed to Guide Dogs for the Blind’s public graduation ceremonies. The next one takes place on Oct. 27 at the San Rafael campus. These public events honor guide dogs who provide for the community, but they also allow clients to meet the committed puppy raisers who cared for their canine heroes.

“Guidework is the most complicated of all the types of service work, because guide dogs have to make independent decisions for a person,” says Benninger. “The dog has to evaluate if a command is going to put their person in harm’s way and to disobey that command. That takes a pretty special dog.”

Beyond walking their blind or visually impaired person around everyday obstacles like traffic or stairwells, a guide dog’s role in caring for their person can go much deeper. Benninger tells a story about a client living in a big city whose dog took her to the lobby of her office building rather than the elevators as she had commanded. Once in the lobby, the dog led her to a couch where she began to feel disoriented and immediately had a stroke. She was seen in the lobby and got the medical help she needed. Had she been in the elevator at the time, Benninger says, who knows what help might have arrived.

“It speaks to the relationship guide dogs have with their person,” she says. “These teams are pretty remarkable.”—Charlie Swanson

Ceres Community Project was created by Sebastopol chef Catherine Couch in 2008 and has evolved from one woman helping a friend into an organization that touches the lives of thousands. “A friend of Catherine’s asked if she could teach her teenage daughter how to cook,” says Ceres communications director Deborah Ramelli. As the story goes, Couch struggled to incorporate a teen with no cooking experience into her catering business, but as Ramelli says with a chuckle, “Catherine does not like to say no.”

So Couch devoted one day a week to cooking with the young girl for friends who had been diagnosed with various serious illnesses, cancer among them. “What she noticed was that this teen had not only gained cooking skills but also a sense of pride, accomplishment and empowerment from what she did,” Ramelli says. When Couch saw the effect cooking for sick friends had on the teen, she recognized the potential for blending food, youth and helping those who are struggling with illness. Ceres Community Project was born.

The organization, which has branches in San Rafael, Santa Rosa and Sebastopol, operates on several principles, the first being that everything is connected. “When we are considering employing practices, we approach it from a holistic view,” says Ramelli. “For example, organic food: it will have less of a toxic burden on the people who are sick; [it] is important because we are supporting practices we believe in; and it is encouraging a more sustainable planet. We believe all these elements are intertwined.”

And the intertwined elements tend to have staying power for those who embrace them. Families who come through the Ceres Project, says Ramelli, are likely to remain mindful about the food they are buying. “We know from our surveys that many of our clients change their eating habits for the better. So although the food is ephemeral, there is a lasting impact in terms of [families] eating less processed food, less sugar, and cooking more meals from scratch. The same thing goes for teens.”

The Ceres Project also has a big influence on the young adults it employs. “Youths come into a community where they have an experience of food,” Ramelli says. “They are involved in the whole process of what it takes to make a meal, from the garden to the kitchen, and then hearing what a difference that single meal makes on a family. They get a bigger understanding of what their role could be in the world.”

Ceres’ teens have gone on to work in professional fields across the spectrum. One teen who worked at the project for years credits her criminal law career to a street outreach program Ceres put on. She worked with Ceres on a project that reached out to homeless youth living in a shelter, and provided them with the knowledge on how to make healthful meals on a budget.

“Food is the vehicle,” says Ramelli, “but the impact is so much broader.”—Aiyana Moya

Next ArticleVoter’s Guide, Part One