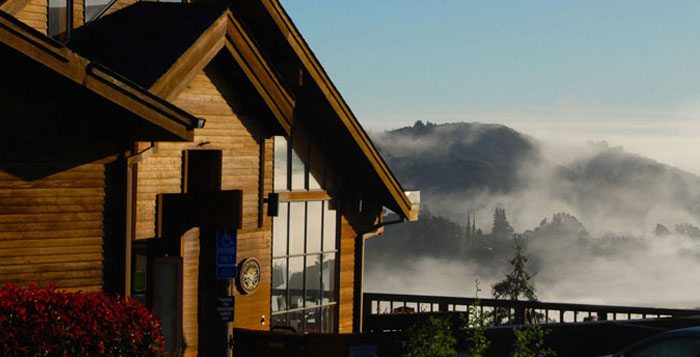 by Samantha Campos and Matthew Stafford

As the old year diminishes and the New Year beckons, reflection and contemplation become inevitable. What you need right about now is a moment to get away from it all, to think, to reconnect, maybe even to rediscover. The classic venue for reflection and contemplation is a saloon, particularly around New Year’s … as long as it isn’t too flossy, too popular, too familiar. It doesn’t have to be far away, and it doesn’t have to be for very long. A scenic hour’s drive on a stolen afternoon could do the trick. A barstool, a pint and some affable strangers can have rejuvenating powers—or, at the very least, the power to change your perspective.

Highway One or Shoreline Highway between Mill Valley and Stinson Beach and up to Point Reyes Station (and beyond) is a meandering two-lane stretch sure to induce nausea or frustration if you’re in a hurry or if you find yourself behind a bus. It can also be nirvana if you let it; taking the time to glide around bends, rolling your window down to breathe in the fresh scent of pine and eucalyptus, admiring the misty, verdant, moss-covered terrain or the magnificent vastness of our world’s largest and deepest sea. Sir Francis Drake Boulevard between Fairfax and Olema inspires a similar, albeit quieter, kind of awe. Venturing to these bars is about the journey as well as the destination.

Getaway bars in tucked-away places offer temporary solace from the demands of the holidays and the pressures of the coming year. They can be a respite for the overworked, an oasis for the overstimulated; a place where you can unplug, be anonymous and think your thoughts. And have another drink.

The Mountain Home Inn (810 Panoramic Highway, Mill Valley; 415/381-9000; mtnhomeinn.com) is Marin’s great top-of-the-world getaway. After a long and lovely drive through mist and forest you emerge on the flanks of our favorite alp, bay, ocean and Sequoia sempervirens stretching into the distance. The inn itself has been around in one form or another since 1912, and its venerable ambience adds to the establishment’s timeless quietude. The tiny blond-wood wine bar just off the lobby features such rustic touches as branch-frame barstools, dried-twig chandeliers and mounted snowshoes; or you can take your drink out on the balcony and inhale the perfume of the cypress, pines and redwoods in the canyon below. (If you over-imbibe, there are 10 inviting guestrooms on the premises with Jacuzzis, fireplaces and canopied beds.) This upscale aerie effortlessly complements the surrounding landscape and lets you enjoy the beauty and stillness of Mt. Tamalpais in meditative comfort.

Just past Muir Woods and a little further along Highway One, as the road begins its epic crawl up the coast, an enchanting ivy-clad tavern appears as if by wizardry. In fact, the magical Pelican Inn (10 Pacific Way, Muir Beach; 415/383-6000; pelicaninn.com) was built in the 1970s by an Englishman, Charles Felix, and his fledgling brood, who captured the romantic whimsy and rustic charm of a classic 16th century Tudor-style cottage. Its accompanying pub is likewise inspired and cozy, with a menu of traditional British country fare and a full range of ales and ports to quench thirsts and comfort ruminations.

No town in Marin could possibly embrace the “getaway” ethos more than Bolinas. Once you enter its notoriously hidden enclave and drive (slowly, please!) through its quaint village of art galleries and shops, the historic facade of Smiley’s Schooner Saloon & Hotel (41 Wharf Road, Bolinas; 415/868-1311; smileyssaloon.com) beckons you in with its utter lack of pretense, reasonably priced spirits and calendar of lively entertainment. Built in 1851 and surviving through Prohibition (under the guise of a barbershop), Smiley’s is the oldest continuously run bar west of Missouri. It’s also a faithful neighborhood hub, welcoming local dogs, denizens and travelers alike over a game of pool, the latest issue of Bolinas Hearsay News, or a drink and a ponderous moment.

Heading into Olema at the junction of Sir Francis Drake Boulevard and the coast highway, it’s hard to imagine that this tranquil village of 55 souls was once a raucous loggers’ boomtown of brothels, saloons and gambling dens. Nowadays, the traveler seeking a restorative libation after a misty, mysterious journey through Point Reyes National Seashore has fewer options for whistle-wetting, but among the town’s handful of shops and inns is the convivial Olema Farm House Restaurant (10005 California Highway 1, 415/663-1264). Housed in the village’s oldest structure, it has an abiding 19th century charm that invites you to escape the modern era. The bar is handsome and cozy with Tiffany lamps, a pressed-copper ceiling, fun decor (including a vintage tipsy Hamm’s Beer bear) and a civilized vibe that seems to bring out the wildness of West Marin. It’s pleasant indeed to sit at the bar, sip a brew and eat a dozen oysters from nearby Marshall, 21st century at bay.

Once you reach Point Reyes Station, its artisan markets and gustatory delights might distract you. Let them, and then hole up for a spell in the authentic Old Western Saloon (11201 California Highway 1, Point Reyes Station; 415/663-661). Another vestige of Marin’s past, the Old Western originally opened in the late 19th century in the adjacent building (now a barbershop), and then switched to its current location after the 1906 earthquake. During Prohibition, its speakeasy dwelled below, accessed by stairs beneath the piano (still there!). The upstairs housed a brothel, then a hotel, and now offices. The bar is fiercely reminiscent of that bygone era, and therefore suitable for reflection accompanied by a pint of one of their many draft beers.

Deep in the forests of the San Geronimo Valley—a place so limpid and magical that you wouldn’t expect to find anything there but toadstools, trolls and the occasional reindeer—one of Marin’s few remaining honest-to-God blue-collar bars beckons. The Papermill Creek Saloon (1 Castro Avenue, Forest Knolls, 415/488-9235) looks like a pickled-in-amber hangout from West Marin’s rugged past: neon, worn wood, jukebox, good ol’ boys playing liar’s dice at the bar. The joint comes by its vintage vibe honestly: It’s been around since 1907, originally as a general store, and has been selling hooch for 75 years. Named for the huge paper mill (the first in the West) Samuel P. Taylor built nearby, the saloon perches over rushing San Geronimo Creek, bringing a bit of the great outdoors to the surroundings. But the mood inside is warm and cozy, especially on a cool, drizzly night with a fire burning in the Franklin stove in the corner.

Farley Bar (601 Murray Circle, Fort Baker, Sausalito, 415/339-4750, cavallopoint.com) is a true urban oasis amid the pines, oaks and eucalipti of southernmost Marin. After a foggy, mildly spooky drive through the Marin Headlands, you find yourself on the shores of the Golden Gate in a plushly upholstered cocktail lounge ideal for the sipping of martinis and the slurping of oysters. The lush draperies, gleaming glassware, pressed-tin ceiling and exemplary liquor selection foster an elegant yet festive mood unique among Marin’s tucked-away watering holes. The magnificent redwood burl bar is a splendid place to unwind and reflect, or opt for one of the comfy armchairs by the fireplace or out on the veranda (blankets provided).

A few other Marin bars foster a temporary escape from the day-to-day as well. Enjoy a burger and a beer with your thoughts, overlooking the bay and the Golden Gate Bridge at the long-established and beloved dive bar of the Presidio Yacht Club (Fort Baker, Sommerville Road, Sausalito; 415/332-2319; presidioyachtclub.com). Reward yourself with live jazz, oysters and a martini at the elegant and homey Sand Dollar Restaurant & Bar (3458 Shoreline Highway, Stinson Beach; 415/868-0434; stinsonbeachrestaurant.com). Enjoy the rural ambience and down-home hospitality, backyard barbecues and outstanding live music of Rancho Nicasio (1 Old Rancheria Road, Nicasio; 662-2219; ranchonicasio.com) in a town where time stopped—and you can, too.

Offer to buy Sam and Matt a drink at [email protected].

Next ArticleUpfront: A house divided