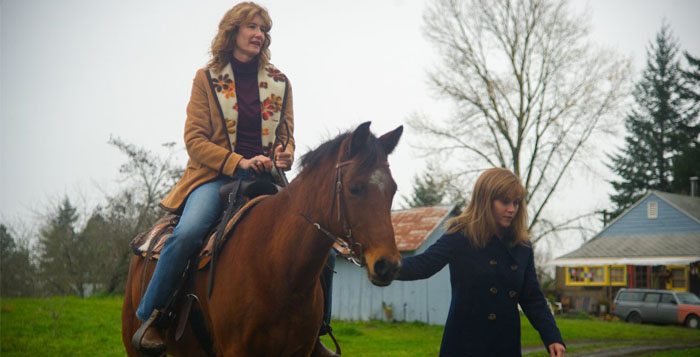 Laura Dern is leaning against the wall, at the rear of the Christopher B. Smith Rafael Film Center, as a series of clips plays on screen—Mask, Smooth Talk, Blue Velvet, Citizen Ruth, Jurassic Park, The Fault in Our Stars—each featuring a typically luminous performance by Dern. As she watches her greatest hits, the flickering light from the screen illuminates her, a look of reluctant wonder on her face. The Oscar-nominated actress (Rambling Rose) is present this October evening for a Mill Valley Film Festival screening of her latest film Wild, in which she plays the mother of Reese Witherspoon’s ex-addict redemption-seeker, walking 1,100 miles on the Pacific Crest Trail as flashbacks—that’s where Dern steps in—tells the story of how she got here.

Wild, directed by Jean-Marc Vallée (Dallas Buyers Club), is now officially in theaters, with Oscar handicappers singling out Witherspoon for a probable best actress nomination. Tonight’s audience, though, knowing that co-star Dern is in the house, is abuzz with talk that Dern should not be overlooked either, so key is her performance to the story of Wild.

“You were so young!” exclaims Festival Director Mark Fishkin, as Dern takes the stage after the clip reel is over. Dern was 18 years old when she appeared on screen for the first time in Mask and Smooth Talk, both released in 1985. Since then, she’s established herself as a truly versatile performer with a taste for off-the-wall material, and a drive to push herself with challenging projects. Tonight’s audience is filled with people who’ve watched her grow up on screen, as one enthusiastic fan shouts out—“We grew up with you, Laura! We love you!”—as Dern graciously acknowledges the crowd’s applause.

“Thank you so much! I love you, too!” she says, and maybe it’s just because she’s a great actress, but she certainly seems to mean it.

Film festivals are one of the rare opportunities for film fans to engage in face-to-face conversation with the people who make movies. That post-screening give-and-take, though formalized with moderators and volunteers running microphones out to the audience for each new question, often results in spontaneous moments as memorable as the films the movie-stars-of-the-moment have created.

One of the first questions, from a fan who’s read the book Wild, Cheryl Strayed’s best-seller on which the new movie is based, is about whether the book was useful in creating her character.

“It was a pure gift,” Dern says. “Anyone who hasn’t read the book, you really should. Reading it is such an incredible journey, and Cheryl’s voice—as you saw in the movie—is pretty remarkable; it’s brave and almost shameless, which is tragically unique. We don’t see that kind of voice in film very often, and we rarely read it in books— someone so nakedly displaying their bad choices, and showing their willingness to face those choices without defending them or explaining them.

“I am so moved by Cheryl’s story,” she goes on. “And we shot the movie, in part, where Cheryl lives now, so she was with us for 95 percent of the shoot. She totally opened her heart to us, as she does in her book. She’s fearless, which isn’t to say she hasn’t been afraid in her life. Fearlessness, really, is about being afraid but moving ahead anyway, because you are more scared of who you’d be if you gave into your fears and didn’t do the scary thing, than you are actually afraid of that thing.

“Does that make sense?”

The audience responds with a huge round of applause. That’s audience-speak for, “Yes, that makes sense—and then some.” In a public Q&A, where only some of the audience gets to speak, the crowd often finds other ways to communicate their responses.

“What’s so cool about this movie,” Dern adds, “is that it’s a love story. But unlike most movies about women, the love story isn’t a boy-meets-girl story. It doesn’t involve her falling in love with a guy, or defining herself by finding a relationship with a guy. This is a love story between a daughter and her mother. Everything brave about Cheryl, the way she breathes life into everything and everyone around her—you learn in this movie that all of that comes from her mother.

“Playing this part,” she says, “has actually brought me to a place where I can now fully appreciate, and be grateful for, everything I’ve learned from my mother, and maybe never realized.”

“With his reputation for being a collaborator and improviser on set,” comes Dern’s next question, “what was it like working with Jean-Marc Vallée?”

“He’s a trip,” Dern says with a laugh. “He’s at the top of the list of impassioned filmmakers—someone who won’t stop until he believes he’s captured the truth of a scene. And he is a collaborator. He wants everyone to be part of the party, the cast, the crew, everyone.

As an example, Dern describes a moment on set where Vallée was looking for Witherspoon, who he’d sent behind a trailer to change clothes a few minutes ago. Dern, by the way, does a spot-on impersonation of Vallée, complete with French accent.

“Where ees Reese! Where ees Reese!” she says, mimicking the director calling for his lead actress. “We said, ‘Jean-Marc, she’s changing her costume. She’ll be back in three minutes,’ and Jean-Marc went, ‘Three meen-utes? Three meen-utes! My god! Weeee are wasteeng time! Fine! Laura! Come here! We weel do a scene!’ And we improvised a scene right there on the spot! Every day was like that. It was amazing!”

“How much of what you did on set ended up in the actual movie?” one fan wants to know.

“All of it!” Dern replies. “Can you believe it? That never happens. Often, when you are working with visionary directors like David Lynch, on three-and-a-half-hour movies, there comes a moment when they call you up and say, ‘I know you were attached to this or that scene, but we had to lose some of that because the film had to come in at a certain length,’ right? Well when Jean-Marc was about to show me the finished movie, outside the editing room, he said, ‘Laura!! Laura! I used every-theeng! You think I am maybe keeding? Remember when I came into your trailer and filmed your make-up test? That’s in the movie, too!’

“He’s so beautiful!” Dern says with a laugh. “He’s just so excited to be making a film, you can’t help but get excited, too. When you’ve been making movies your whole life, like I have, you really appreciate it when someone can make you feel that excitement again. And I think the audience can feel that excitement and danger and risk-taking on screen.

They tell her the way they do best. With a spontaneous round of applause, to which Laura Dern merely stands, hands clasped, beaming a smile that looks a whole lot like love.

Ask David if he’s ever hiked the Pacific Crest Trail at [email protected].