No word yet if smoke taint will obliterate this year’s wine grape harvest, but the tri-county area has brewed up a backup plan in case 2020 proves to be a year without a vintage.

As tempting as it is to say that we have a “Plan B for Beer,” the fact is this has always been the region’s Plan A. Before Vineburg there was Hopland and before you look that up to prove me wrong, consider that we are on the eve of October, which means Oktoberfest is coming soon.

I predict there will be no Halloween this year, so those adults who like to drink and costume themselves in saucy versions of pop culture characters should prepare to pivot and embrace this annual celebration of brews (that is if you need an excuse to dress up as sexy Baby Yoda and drink).

Here’s an Oktoberfest primer I once wrote somewhere else:

“Codified in 19th century Bavaria as an official 17-day beer-fueled celebration, Oktoberfest has been imported and contorted by innumerable celebrants as an excuse to go on a bender.” Still true.

And though I don’t have access to Bavaria, I do have access to the Bohemian and the Pacific Sun archives—specifically to the readers’ polls that comprise our “Best Of” issues. Using this data, I’ve been ruminating on beer; it’s been “room with a brew,” if you will.

I think this is a fine time to keep a tab on your county’s “Best Brew Pub”—in Napa that would be Hop Creek, in Marin that’s San Rafael’s State Room and in Sonoma it’s Russian River Brewing. My suggestion is to suss out the suds situation online first, followed by a phone call. The laws being in flux as they are, it’s good to learn both what’s open and how it’s open, if it is. Some places allow you to sit outside and breath the ash from your neighbor’s homes, while others proffer beer-to-go, which is marvelous.

Cruising our other beer-related Best Of entries, I caught a double Sonoma County win for Henhouse Brewing: “Best Beer Label: Henhouse Brewing” and “Best Craft Canned Beer: Henhouse Brewing.” Here’s my recommendation—procure yourself two cans of Hen House, one to sip and another so you can admire its label because, as it turns out, you can’t do both at the same time. If you’re looking at labels, remember Marin’s Indian Valley Brewing also picked up a Best Of Marin nod and Napa’s Mad Fritz also scored a Best Of—which begs the question, why hasn’t anyone cashed in on a beer-label art gallery? Here’s a possible answer—saying you’re into beer for the labels is like saying you “read Playboy for the articles”—no one believes it and you come off as a schmuck.

Another question—why haven’t the Heineken corporate overlords virtualized the Lagunitas Beer Circus yet? Instead of hiring a cavalcade of performers and servers to entertain the masses, let them do it themselves: Invite everyone to stay home with a case of the Dutch-owned Petaluma brew and a webcam trained on their own feats of derring-do. This could be a massively multiplayer online game on a global level but everyone wins. As for reenacting Napa’s Blues, Brews, And BBQ—our streak of “Spare the Air” days will likely land you fine for BBQing but surely you can handle the blues and brews part without too much polluting. Pro-tip: Soaking your harmonica in a pint of beer does not make it sound better … unless better means not making any sound at all, which those within earshot may prefer.

Vote to Balance the Power 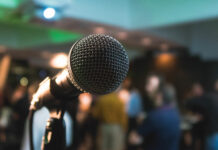