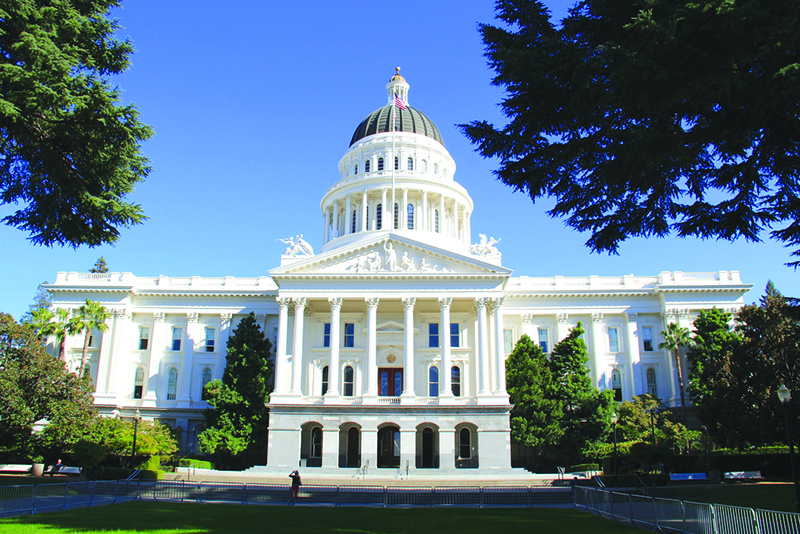 By Jonah Raskin and Tom Gogola

At the annual California Citizen Lobby Day on June 5, cannabis activists from the North Bay gathered in Sacramento to speak to their elected officials. The representatives listened politely, though they made no promises.

Earlier in the day, at the appropriately named Citizen Hotel on J Street, cannabis advocates, cannabis lawyers, cannabis doctors and cannabis users listened to speakers who talked about the complex and often contradictory world of legal weed in California.

Dale Gieringer, director of California National Organization for the Reform of Marijuana Laws (NORML), told the audience that “two-thirds of the municipalities in the Golden State have no legal pot dispensaries” and that “there’s a crackdown on cannabis cultivation from one end of the state to the other.”

Of the 600 bills that came before the California State Legislature this session, 60 were about cannabis: cannabis delivery services, cannabis dispensaries, cannabis for pets, cannabis and employment and the removal of felony cannabis convictions from criminal records in California.

According to Gieringer, there are 100,000 felony convictions on the books for cannabis in California. Senate Bill 1793, which was introduced in January 2018 by East Bay Sen. Rob Bonta, would make the expungement process the responsibility of the state attorney general, not county district attorneys.

Localities have taken up the cause nonetheless, and technology has sprung to the fore as the solution: a San Francisco company has developed an algorithm to assist local district attorneys in their efforts to expunge cannabis convictions as part of the Proposition 64 cannabis-legalization reform.

Code for America, a San Francisco nonprofit, is now working with San Francisco District Attorney George Gascón as his office sifts through thousands of felony and misdemeanor pot convictions with an eye toward clearing residents’ criminal records when they can. Under Proposition 64, persons convicted on pot charges can apply to have their cases expunged.

“California has decriminalized recreational cannabis use,” says Gascón in a statement, “but a marijuana conviction continues to serve as a barrier to employment, housing, student loans and more. . . . Until we clear these records, it’s government that is effectively holding these people back and impeding public safety. I’m hopeful that this partnership will inspire many prosecutors who have cited resource constraints to join this common-sense effort and provide this relief.”

All three candidates in the race to replace outgoing Marin County District Attorney Edward Berberian this year supported the proactive expungement move undertaken by Gascón, and pledged to undertake a similar process in Marin County.

At last count this week, Marin County Deputy District Attorney Lori Frugoli was beating her two opponents, badly, in the race for Marin district attorney, but hadn’t eclipsed the 50 percent vote threshold that would give her the outright victory (she was holding at about 49 percent as of Tuesday afternoon).

Elizabeth Smith, head of marketing at Code for America, says that the hope is to “get it to the point where we are working with enough counties this year that we could clear up to 250,000 convictions.” That figure represents the number of felony and misdemeanor convictions currently on the books in California.

So how does the algorithm work? Code for America and Gascón’s office have agreed to let the nonprofit “pilot a product that allows a government agency, like a district attorney’s office, to determine eligibility for record clearance under state law, automatically fill out the required forms and generate a completed motion in PDF format. The [San Francisco District Attorney’s office] will then proceed to file the completed motion with the court. The process will be applied to all 4,940 felony marijuana convictions dating back to 1975.”

That move would go a long way toward enhancing civil rights for cannabis users caught up in laws that are no longer the law of the land.

As Gieringer explained, NORML is pushing hard for expanded civil rights, including in its pitch to lawmakers that there be no obligatory drug testing by employers. He’d like to see a greater embrace of the opportunity legalization has provided to use cannabis to help end addiction to opioids. Meanwhile, organized labor is also high on legalization. The Service Employees International Union thinks that workers ought to have the legal right to smoke marijuana on their own time, away from work, in much the same way that people enjoy a cocktail or a glass of wine. Workers of the world, light up!

Matt Hummell, the chair of the Cannabis Regulatory Commission in Oakland, explained at the Citizen Lobby Day that the marijuana black market is thriving in the East Bay because rents are so steep that many wannabe dispensary owners can’t afford to enter the legitimate cannabis business. That’s a problem that resonates in Marin and Sonoma counties as well. The former county has basically succumbed to a NIMBY rampage by self-appointed moral scolds when it comes to brick-and-mortar pot shops. Sonoma County has taken a more accommodating posture to the advent of legalization, but the red tape around licensing requirements has been a huge disincentive for growers to come out of the proverbial shadows.

“It’s a struggle to get a permit,” Hummell said. “At the same time, big money for the cannabis industry has flooded the city.”

One longtime Bay Area cannabis cultivator said he was disgruntled by the legalization rollout and wouldn’t and apply for a permit.

“I’m willing to take a chance,” he said. “It’s an act of civil disobedience.’

North Bay State Sen. Mike McGuire is worried. Very worried. He’s checking his go-bag, he says. He’s been attending fire summits around Marin County this season, and the news from the just-reelected senator from Healdsburg is that the Mt. Tamalpais watershed is “overdue” for an inevitable trial by fire.

McGuire issued his warning to a reporter last week just as Cal Fire was about to release its latest findings on last year’s epically scary fire season, which destroyed vast tracts of homes and property in the North Bay. Cal Fire is putting the finger on PG&E, officially, as of Friday, as the culprit in a dozen fires from 2017.

Cal Fire reported that the strong winds on Oct. 8, 2017, knocked trees onto PG&E-owned power lines, and caused at least 12 of the October fires. Of those 12, investigators found evidence of possible violations of state law for eight of them. They referred the reports for these eight to local district attorneys for further scrutiny. The findings may open PG&E to billions of dollars in liability. The largest utility company in the state is investor-owned and already faces over a hundred lawsuits and $100 million in insurance claims from the damage the fires have done. According to Cal Fire, more than 170 fires broke out across Northern California in early October last year. Cal Fire determined that fires in Butte, Humboldt, Lake, Mendocino, Napa and Sonoma counties were caused by electric power and distribution lines, conductors and the failure of power poles.

“It’s disappointing and deeply concerning that alleged violations of state law led to devastating fires across my district,” said Napa State Sen. Bill Dodd in a statement late last week. “I’m calling on PG&E, utilities across the state and the Public Utilities Commission to step up and ensure they are meeting their legal obligations to maintain power lines in a safe manner. It’s inexcusable and it can’t be allowed to happen again.”

Dodd has two bills that passed the senate and await committee hearings in the Assembly.

“SB 901 requires electric utilities to update their wildfire-mitigation plans to include policies and procedures for determining if, when and where to temporarily de-energize a power line during harsh weather,” Dodd says in a statement. SB 1088 would meanwhile build a framework for strengthening utility infrastructure.

PG&E pushed back against the Cal Fire report late last week. “The loss of life, homes and businesses in these extraordinary wildfires is simply heartbreaking,” says utility spokesperson Deanna Contreras, “and we remain focused on helping communities recover and rebuild. We look forward to the opportunity to carefully review all of the Cal Fire reports to understand the agency’s perspectives. Based on the information we have so far, we continue to believe our overall programs met our state’s high standards.”

Cal Fire’s report did not include the Tubbs fire, which took 24 lives and burned down more than 4,650 homes in Santa Rosa. PG&E blames power lines belonging to a private homeowner for that one. Cal Fire has yet to identify the culprit. Investigators have not yet officially determined the cause of the Tubbs fire in Sonoma County.

Jarvis Jay Masters, the Buddhist author and death row inmate on San Quentin, has linked up with the American Civil Liberties Union and the organization Witness to Innocence and is suing the state of California over its new lethal injection regulations. Master has maintained his innocence in a capital charge that stemmed from the murder of a corrections guard at San Quentin almost 40 years ago. In a statement, the Committee to Free Jarvis Masters says the inmate “would like everyone to look at this case in a way that makes it personal—he will be the human being that all these ‘protocols’ will be done to kill him. He wants to make it real and urgent.” Earlier this year, the state unveiled a new single-drug protocol that would use either pentobarbital or thiopental to execute the condemned.

One of Masters’ biggest supporters is American Buddhist and author Pema Chodron, who will visit the inmate this month, according to Masters’ Marin County support network.—Tom Gogola

Next ArticleMusic: The Voice