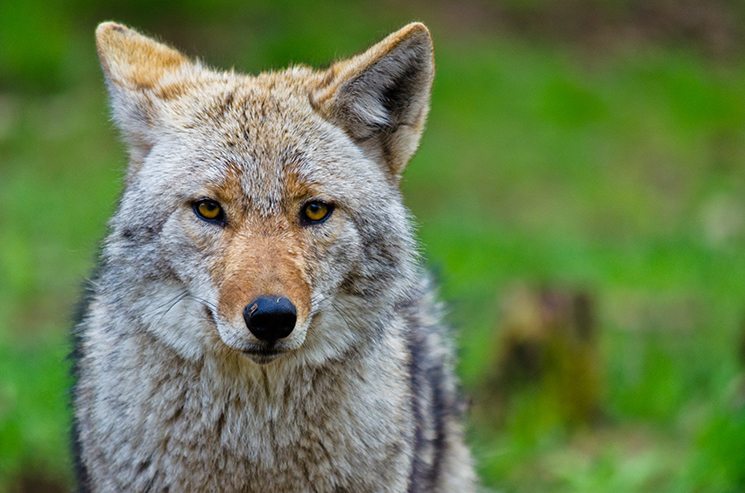 West Marin residents have lately been reporting a strange sight on Highway 1 near the Slide Ranch turnoff. It’s all the talk at Beth’s Community Kitchen in Bolinas and elsewhere: A coyote has taken to staring down automobile drivers as they drive through this twisting, turning section of highway, before attacking the car and then skulking off back into the wilderness. The coyote runs up to the cars, usually at night, forcing drivers to stop as the beast stares and sniffs around the vehicle.

The coyote “attacks” have happened a bunch of times, to enough people, to warrant calls to figure out what’s going on with the animal. Or, animals, as the latest grist out of Bolinas has it that there are now two coyotes acting a little weird, or a lot weird: Drive-by coyote stare-downs have now become part of the normative experience for a Bolinas-based individual who makes numerous nighttime airport runs every week. We are not identifying this individual, who fears retribution at the vengeful paws of these bushy-tailed beasts. He would only say, “It’s a terrifying, yet beautiful thing to behold.”

The Marin Humane Society has fielded at least one inquiry from a coyote-concerned citizen and is looking into the case of the aggressive coyote, says Lisa Bloch, director of marketing and communications for the society. “We are trying to figure this out.”

There are three possible scenarios to explain the behavior, ranging from least probable, kind of fun to consider and most probable. The least probable problem with the coyote, or coyotes, is rabies. This sort of “Old Yeller” type of aggression usually comes at the end-stage of the disease, the “terror stage” or “zombie stage” of rabies, at which point the animal is going to die, Bloch says.

These coyote attacks have been going on for at least three weeks. If it were rabies, Bloch says, the coyote would likely be dead by now. “If this is going on longer than a week or so, then it’s likely not rabies. And we don’t suspect rabies, just because it is pretty rare.”

Whew, it’s not rabies. It is possible, but not probable, that the coyote has eaten something—perhaps a fly agaric mushroom (amanita muscaria) which has hallucinogenic properties—and has subsequently been tripping its tail off. The cars would therefore be some sort of coyote vision, a dark vision of human interlopers, who must be stopped before the rents get any higher in West Marin. That would be kind of cool.

Bloch could not completely rule out the possibility that coyotes are having psychedelic experiences out on the feral fringes of civilization, and in fact she has been counseling dog owners of late on the dangers of poisonous mushrooms in our midst.

Coyotes hold a special, spiritual place for many a West Marin resident and Bloch urges those of a coyote persuasion to keep a safe distance from the beast of lore. The animals were eradicated in these parts through the 1950s because of their deleterious impact on cattle, but now that they’re back in force—yip-yip, you need to give the beasts some space. The state estimates that there are between 250,000 and 750,000 coyotes in California.

Bloch notes that while the animals are native to the county, “there were not coyotes in Marin for decades” because of a United States Department of Agriculture program that completely annihilated the Marin-based population. “When you indiscriminately kill predators, you are messing with the ecosystem.” Coyotes’ staple diet is mice, and that can get kind of monotonous, especially in a county of such rich, sustainable culinary pleasures.

Which brings us to the likeliest scenario to explain what the heck those coyotes are doing up there on Highway 1 attacking cars. Camilla Fox, who founded the organization Project Coyote (projectcoyote.org) is responsible for signs that pop up around West Marin trailheads that say: “A fed coyote is a dead coyote.”

The message is: Don’t feed the freaking coyotes. “If there are bad apples out there who are feeding the coyotes, they need to stop,” says Fox. “They can be cited—there’s a law that was specifically enacted to stop people from feeding wildlife.”

“One possibility is that the coyote has been fed, and this is a real problem for us in Marin,” Bloch says. “It’s possible that someone was feeding him and thinking that it’s cool, and magical and mystical to have a coyote eating out of his hand.”

Or, some dingbats might simply have thrown some baloney out the window in the direction of a coyote, who dutifully scarfed the meat and now wants more where that came from.

Animals start acting super-aggressive, Bloch says, once the food-proffering hand has been introduced. So don’t do that, and instead understand that a fed coyote is a dead coyote. “What this means is that basically we want the animals to be afraid of us naturally,” Bloch says. “If they are not afraid of us, they come close to our cars, get hit, fight with domestic dogs and can possibly become aggressive.”

The problem for coyotes is that if they turn aggressive, “the coyote is going to be blamed if a dog or, god forbid, a person is mauled.”

The only recourse then is to kill the coyote. Bloch is a Tam Valley resident who says the neighbors can and should do a better job at keeping their property coyote-resistant, to limit such unwelcome outcomes. “It’s very frustrating to me—there are lots of coyotes all around, but people are leaving pet food out, small animals are roaming off leash, the cats are out. It’s an easy meal for a coyote.”

The Humane Society is working the coyote-chase-car problem, Bloch says, and is asking for the public’s help—if anyone has seen the stare-down coyote near Slide Ranch, give them a holler. “We encourage people to report it right away if they see any kind of behaviors, any wildlife acting strangely, biting the tires of a car. We would go and check it out.”

If the Humane Society locates the coyote or coyotes and discovers that they are injured in any way, its next stop would be at the animal rescue operation WildCare in San Rafael. But the Humane Society prefers any option that helps them save the animal while not trapping it—such as when a deer recently found itself in Bolinas Lagoon, like so many DUI drivers before it. “We pulled it out of the lagoon and once we determined the deer was OK, we led it to a quiet place so it could recover on its own.”

That would be the preferred scenario for the coyote now menacing traffic on Highway 1. If the animal winds up at WildCare, “It’s not going back into nature,” Bloch says.

Previous ArticleFeature: End of the trail