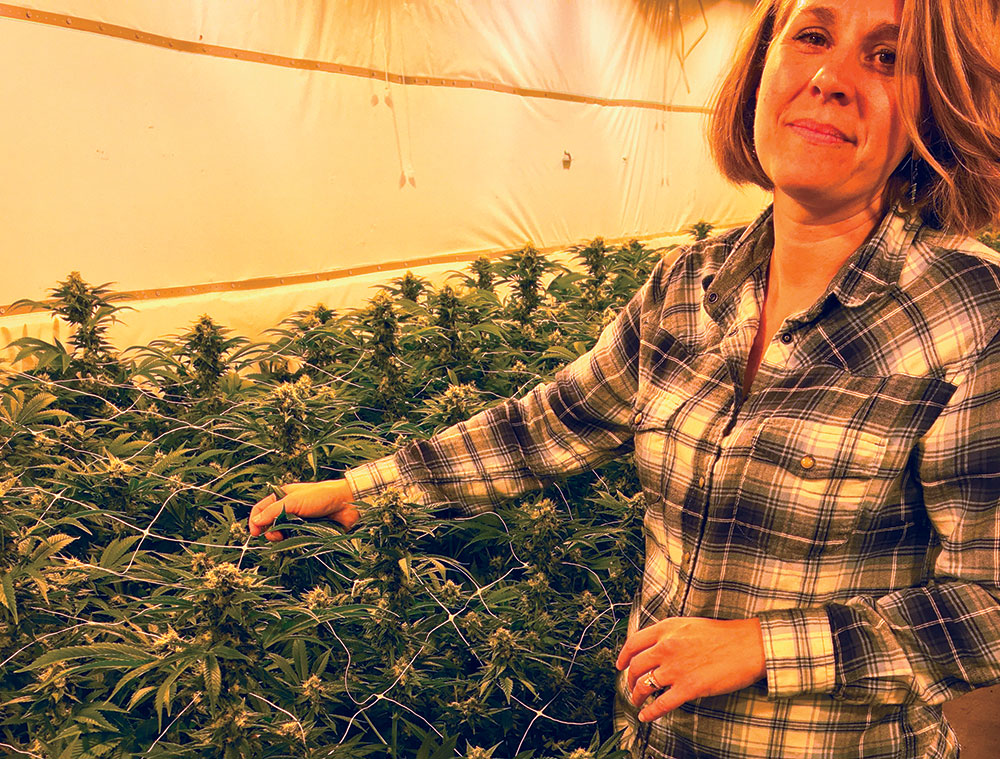 Lisa Lai stands, hands on hips, on a remote mountain top with her watch dog Smokey at her side. She tells me, “I’m a no bullshit person.” She goes on to explain that she doesn’t bullshit her husband, her daughters, her friends, the county of Sonoma or the cannabis industry to which she belongs.

To get to her fifteen-acre property, I’ve had to pass through two locked gates and cross two cattle guards. To get into Lisa’s indoor garden she’s had to unlock three doors.

It’s unlikely anyone would come this far to steal her crop, first on paved road, then on dirt road, along the edge of a cliff. It would take serious effort to get here, and then even more effort to harvest, transport downhill safely and sell on the black market, the only place you can hawk “hot” weed. Only a fool would try.

“I have what’s called ‘penalty relief,’” Lisa explains when I first arrive. “I’m allowed to grow weed even though I don’t have final county approval.”

Lisa calls the whole approval process expensive and frustrating. Members of the Hessel Grange, the local organization to which she belongs, echo her view, though they each tell their own individual stories. Some don’t want to be written up and photographed. They prefer to be anonymous. That’s not Lisa.

I met her at the Hessel Grange at the end of a meeting held outdoors, with everyone sitting in chairs in a circle, practising social distancing and yet still smiling and laughing. Lisa gave me her cell number and the name of her business, All Cali Farms, and asked, “What do you know about me?”

I replied, “That you’re a marijuana grower and a woman.”

The daughter of a mechanic and a nurse, Lisa attended Humboldt State University and cut her eye teeth in the Humboldt cannabis industry. She remembers the days when feds helped state and local police raid gardens and make arrests.

Not surprisingly,  she hasn’t returned to her cannabis roots in Humboldt.

“I’ve been in Sonoma County for 10 years now,” she tells me. “This is home. I keep bees here and make honey, my daughters go to school in The Springs, and I’m a member of the Hessel Grange.”

At a recent meeting, the members swapped stories and talked about Black Lives Matter and George Floyd. The men tended to be loud and say “fuck” a lot. The women seemed to listen more carefully than the men.

Lisa likes the no-bullshit style of the Grange and the fact that the organization supports Black Lives Matter.

“I stand in solidarity with the Black, Latinx, and LGBTQ communities,” she tells me. “I think that people in prison for cannabis ought to be released.”

She’s on her feet much of the day in a room with artificial lights, whirling fans and there’s really only enough room for one person.

Lisa’s organic grow is “a sea of green,” which might be accurately described as a small, compressed version of a large outdoor plantation on steroids, so to speak. The marijuana plants in Lisa’s sea of green are protected by a complex security system.

“I have 400  girls here,” she says, “I’ll harvest 30 pounds of flower in a couple of months and then I’ll start another crop. I grow different strains because I believe in diversity and because connoisseurs and aficionados want variation and not the same-old same-old same-old.”

Lisa gets up close and personal with her “girls,” energizing them with her energy, providing good soil, bright lights and good clean water, which she has to give them every three to four days or they’ll shrivel and die.

“Growing indoors was originally a way to hide,” she reminds me.

Indeed, it was a way to conceal plants from aerial surveillance. Indoor also opened up opportunities. You can grow and harvest three to four times a year, protect the environment and have zero waste, though bad actors operate everywhere. Lisa’s sea of green looks healthy, smells fresh and clean, and it’s also pesticide free.

Lisa and her husband have two school-age daughters who have grown up knowing their mother was a successful pot grower.

“They know what I do for a living,” she tells me. “They also know marijuana is medicinal and not for little girls.”

Lisa is a success in a fledgling industry that the state of California and local municipalities have often tried to stymie. Indeed, officials have created a maddening and monstrous system and made a woman—Lori Ajax—the czar of the Bureau of Cannabis Control.

If Ajax is near the top of the cannabis pyramid, Lisa is near the bottom, not scraping it and yet scraping by. She plans to make real money soon and expand.

To get to the place where she is now she’s had help from family and friends and she gets along with neighbors who know what she’s doing and who like her. That’s essential. She doesn’t want anyone to file a complaint with the county. Lisa also gives credit to her own “grit,” her ability to stay focused and her ability to be happy on her remote mountain top.

“I’m never bored,” she says. “I can always process my thoughts.” She pauses, looks out at the forest in the distance, and adds, “There’s a revolution in our own country.”

Lisa is on the side of the whole cannabis community and especially with the women in the industry including Erin Gore, Dona Frank and Nikki Borracal—newly appointed a county deputy administrator—who aims to end the chaos and confusion at the county level where folks acted as though pot was still illegal and had to be stamped out before it multiplied.

Lisa thinks that men have dominated the industry because they’re likely to be tougher and rougher than women and more likely than women to provide “security.”

David Downs, the California editor of Leafly and the author of four stellar books about cannabis, has probably written more copy about women in the industry and provided more insights than any other reporter.

“There’s a gender gap in the industry, and there’s sexism, too,” he tells me during a phone interview. “There is support by women for women, but in general women have more to lose when they come out of the cannabis closet than men.

“Young men who want high levels of THC in their weed tend to spend more money and to talk more than women. Guys go online and brag about the big bong hit they did.”

Downs pauses a moment and adds, “There’s real feminine energy to the cannabis plant that should be respected. Some of the best growers are female. They tend to be less obnoxious than the guys.”

Lisa doesn’t brag, though she has bragging rights. She harvests the crop herself, dries it, cures it, manicures it, weighs it, packages it and keeps the books.

“I’ve never hired a lawyer or a consultant to do anything for me in the industry,” she says.

She is looking forward to final county approval, building a greenhouse, growing more weed and maybe exchanging seeds with another farmer and growing a strain or two, for her own personal use. Wasn’t that how she got started?

To get out of her sea of green and into the sunlight, I have to pass through three doors. To get downhill I have to get beyond two gates. Once I’m back on the paved, two-lane road, I can hear Old Courthouse Square and Santa Rosa civilization calling out to me.

Jonah Raskin is the author of Marijuanaland: Dispatches from an American War.

Next ArticleLimited services for first responders