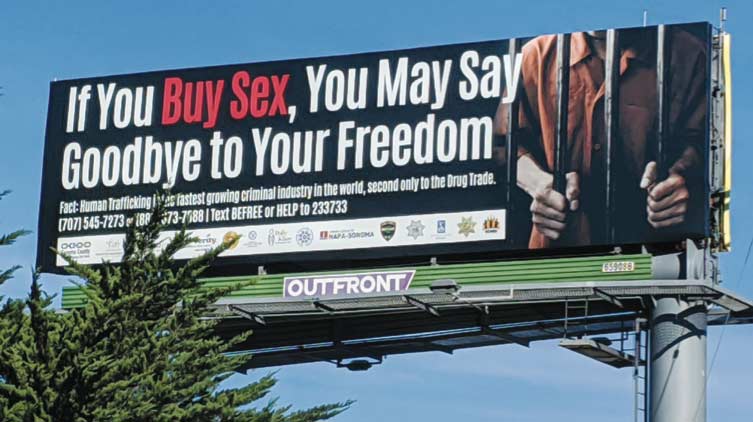 North Bay residents don’t appreciate the scale of a crime happening all around them, despite an increased effort at public outreach over the past decade, according to a local nonprofit director.

Human trafficking, which requires the use of force, fraud or coercion to obtain some type of labor or commercial sex act, is a multibillion-dollar international industry. The problem is far more prevalent locally than most North Bay residents realize, Castillo says.

“Many people in our county just don’t understand. Many people think it’s a foreign problem, that it’s ‘over there,’” Castillo, who has worked at Verity for 13 years, says.

The Marin County Coalition to End Human Trafficking (MCCET), established in 2014, includes representatives of law-enforcement agencies, the Marin County District Attorney and local nonprofits, aims to spread awareness of the size of the human-trafficking industry and coordinate local efforts to end it.

“The Bay Area is one of the largest hubs for human trafficking in the country, and the exploitation is happening right here in Marin under the radar,” Marin County District Attorney Lori Frugoli said in a statement before the coalition’s Jan. 17 meeting. “We have a shared responsibility to raise awareness and teach people to recognize it so our most vulnerable residents are no longer being victimized.”

While drug dealers are often caught holding hard evidence, human-trafficking victims may be coerced or threatened into telling law-enforcement officers that they are with their trafficker willingly.

“Almost 100 percent of the time, they are always going to say that they are independent, they’re not victims, they’re doing this out of their own free will,” San Rafael Police Sgt. Scott Eberle told the Redwood Bark, a Redwood High School student publication, in 2015.

But, despite the lack of general recognition—or maybe because of it—the human-trafficking industry is booming across the world.

“Human sex trafficking is widespread in America – victims are sold in all 50 states. Yet there is limited public awareness of its scope,” the Marin County Civil Grand Jury wrote in a 2016 report about human trafficking. “According to the US Department of Health and Human Services, human trafficking is the fastest growing criminal enterprise in the world, making it second only to drug trafficking.”

Government agencies and nonprofits are partnering to spread awareness about the issue.

In 2012, President Barrack Obama designated January as National Slavery and Human Trafficking Awareness Month. Each year, nonprofits and government agencies attempt to draw attention to the scale of human trafficking—and the resources available to victims—with press releases, advertisements and billboards.

In January 2019, the San Rafael Police Department announced the arrest of five men as the result of an undercover operation in partnership with other Marin County law-enforcement agencies targeting human trafficking and sexual slavery.

County-level data is hard to come by. Arrest rates by law enforcement offer a hint but don’t offer the full picture since a large amount of trafficking goes undetected or is reported as a different crime.

In addition to supporting the increased attention and resources allocated towards solving the problem, Castillo and other advocates also support changes in the language used to describe trafficking operations—and the people law-enforcement agencies target.

Victims likely won’t be able to pay the fine or show up for a court date, she points out. Instead, law enforcement should target traffickers and offer support to victims. Local agencies are moving in this direction, she says.

When Super Bowl 50 came to San Francisco in 2016, law enforcement increased its efforts, anticipating an increase in prostitution as fans flooded into the Bay Area ahead of the big game.

This trend happens like clockwork every year, no matter where the Super Bowl takes place. Last year, when the game was held in Atlanta, government agencies ramped up enforcement and outreach efforts, although they acknowledged that trafficking was a year-round problem.

However, there is no evidence to support the media-fueled idea that trafficking increases significantly with big sports events like the Super Bowl, representatives of the Polaris Project and International Human Trafficking Institute told CNN last February.

The slight uptick in calls to the Trafficking Hotline is in part due to the fact that nonprofits and law-enforcement agencies tend to increase their outreach efforts during large events, including the Super Bowl.

“The problem exists not just at major sporting events but throughout the year in communities all around the country,” Rowson said.

If you or someone you know is being trafficked, contact your local law-enforcement agency or call the National Human Trafficking Resource Center Hotline at 888.373.7888.