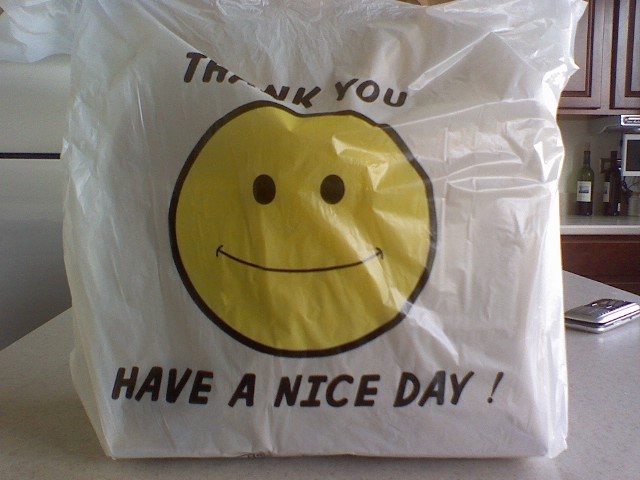 Upfront: The war on plastic bags

To ban or not to ban?

After waging a guerrilla war on local plastic bag bans, the plastics industry has turned its attention to the California Plastic Bag Ban Referendum.

The tactic against the statewide prohibition on plastic bags is just the latest maneuver the plastics industry and bag manufacturers have employed to block bans.
Marin is one of the first places in the country to face a plastics industry assault on a local ban.

Fairfax was among the first entities in the state to enact a bag ban, but only after ducking a legal attack from bag manufacturers, which used a blocking move that presaged future legal tussles in California. Shortly after the Town Council approved a single-use plastic bag ban in 2007, plastics manufactures charged that the town had violated the California Environmental Quality Act (CEQA) because Fairfax had failed to follow environmental review guidelines. The legal challenge asserted that if the town wanted to proceed with a bag ban, it could do so only after assessing how a plastic bag ban would affect the use of paper bags, so-called biodegradable plastic bags and other alternatives. Conducting an environmental review of that nature can cost tens of thousands of dollars, and Fairfax was understandably hesitant.

The California Environmental Quality Act challenge has become a common tactic used by critics seeking to stop projects—everything from transportation infrastructure to housing developments to, yes, plastic bag bans. Fairfax pulled its own legal maneuver from its toolbox and took a proposed bag ban to voters, who approved a ban by a 78.5 percent margin. The town used a CEQA exemption to its advantage. Going to the ballot meant that the town could forego the CEQA rules on which the bag manufacturers based their legal threat.

The plastics industry and bag manufacturers, after losing the skirmish in Fairfax, turned their attention to a proposed countywide ban for unincorporated Marin. When county supervisors were ready to vote for a single-use plastic bag ban in unincorporated Marin in January 2011, a group called Save the Plastic Bag Coalition (SPBC) raised a familiar refrain and dumped a load of legal objections on the county. But the challenges delayed supervisors from approving a bag ban by only a few weeks.
Former Supervisor Charles McGlashan, who had spurred the county to approve a bag ban, said the legal challenge would not deter the ultimate outcome. Former Supervisor Susan Adams, who worked closely with McGlashan on the bag ban, said, “This board is committed to moving forward.” And it did.

The American Chemistry Council (ACC), a trade association that acts as an advocate for companies engaged in the business of chemistry, also moved forward—in an attack on a Marin bag ban. The industry-backed group was traveling the state mounting efforts to block bag bans in local jurisdictions. One of those attempts involved a lawsuit against Manhattan Beach—and one involved a lawsuit filed against the bag ban in Marin.

Although SPBC, founded by former Tiburon resident Stephen Joseph, a San Francisco attorney, managed to put a thumb in the bag-ban dyke, sustainability proponents saw the two court cases as a delaying tactic rather than a mortal blow for single-use bag bans.

The suit against Manhattan Beach went all the way to the California Supreme Court, which ruled that the city did not have to complete the CEQA review the Bag Coalition wanted because Manhattan Beach is a relatively small community and a ban would pose no severe environmental damage no matter what happened after a single-use bag ban.

SPBC remained committed to stopping other proposed bag bans, and contended that bans could do more environmental harm than good. That charge of harm rests on the supposition that banning single-use plastic carryout bags increases the use of paper bags, which in many ways actually pose more of an environmental threat than plastic bags. And that’s why localities pushing bag bans favored setting a fee on paper bags as an important component in bag bans.

The proponents acknowledge that paper bags pose an environmental concern in large part because they do not break down easily in landfills, where layers lack sufficient oxygen to promote decomposition. Setting a fee on paper bags would discourage their use, encouraging shoppers to bring their own reusable bags.
For a time, the prospect of compostable plastic bags made a splash, but it turned out that they, also, do not break down easily in current landfills.

The county had prevailed in the lawsuit that SPBC filed against the county’s bag ban. Marin took the position that it needed no extensive CEQA environmental review because the bag ban should be what’s called “categorically exempt”. In other words, the ban on plastic bags and a five-cent fee on paper bags would pose no environmental damage and would, in fact, be environmentally beneficial because the fee would help curtail paper bag use. A Marin Superior Court Judge agreed.

The bag ban battle moved to the state Legislature in 2010 with AB 1998, authored by Assemblywoman Julia Brownley, D-Santa Monica. It would have banned single-use plastic bags at grocery stores, pharmacies, convenience outlets and similar stores. Democratic state Senator Mark Leno, who represents Marin, was the bill’s principal co-author. AB 1998 passed the Assembly and gained support from the California Grocers Association. Governor Schwarzenegger said he would sign the bill if it passed through the Legislature. That didn’t happen. The bill failed to pass a Senate floor vote by a 14 to 21 margin.

“AB 1998 would ban all the single-use bags that have been polluting our oceans and waterways and threatening marine life,” said Brownley before the Assembly vote. In addition to banning plastic take-out bags at checkout stands, AB 1998 mandated that shoppers who didn’t bring their own bags would have to buy paper bags made out of at least 40 percent recycled paper for a minimum of 5 cents per bag. Shoppers also could purchase reusable bags. The law would have taken effect January 1, 2012. The plastics industry, and most notably the American Chemistry Council, spent millions of dollars on media buys to influence legislators.

Local bag ban proponents were waiting to see what the Legislature would do before continuing their local bag ban efforts. That’s happening again, except this time local proponents of bag bans want to move forward as fast as possible to effectively block a referendum that would itself block a statewide bag ban.

In 2014, Governor Jerry Brown signed SB 270, which was set to take initial effect on July 1, 2015. It would prohibit large grocery stores and pharmacies from using single-use plastic carryout bags. Small grocery stores, convenience and liquor stores would be prohibited from using the bags on July 1, 2016. The bag bans, like other bans that have been proposed and those that have been enacted in California, deal with only take-out bags. They allow the single use of bags for meat, break, produce and other food. And like other bag bans in California, the statewide ban would set a fee for recycled, compostable and reusable bags if shoppers needed them. SB 270 sets a 10-cent fee on the bags.

In an attempt to blunt the cost of that fee on low-income shoppers, SB 270 would exempt shoppers who use payment cards or vouchers the California Special Supplement Food Program issues.
The legislation also attempted to blunt the initial effects of a statewide ban on the plastics industry. SB 270 would provide $2 million to plastics manufacturers in the state to help retain and retrain workers in the bag industry.

The operative term now is “would.” California Secretary of State, Alex Padilla, has certified that signatures gathered to block SB 270 qualify the referendum for the 2016 ballot. The successful qualification of the referendum suspends the start of the statewide ban at least until the outcome of that election. (The certification carries an irony: When Padilla, D-Pacoima, served in the Legislature last year he introduced SB 270.)

When Fairfax voters went to the polls, they approved their bag ban by an overwhelming margin. Bag ban proponents hope and expect the same will be true statewide in 2016. But the wording of the referendum has caused some confusion that could affect the vote. A “yes” vote means a voter wants to uphold SB 270. A “no” vote means a voter wants to overturn SB 270 and reject a statewide bag ban.
While the political battle over SB 270 leads up to the November 2016 election, local jurisdictions are moving to pass their own local bag ordinances. The referendum will not affect the local bans, including those in Marin, where other cites and towns have joined Fairfax and the county. That acceptance of bag bans has proliferated across the state, where an estimated 138 localities have passed bag bans.

“It’s not surprising that after spending more than $3.2 million, 98 percent of which is from out of state, the plastic bag industry has bought its way onto the California ballot to protect its profits,” says Mark Murray, spokesman for Californians vs. Big Plastic (CVBP). “Every poll shows that Californians strongly support the law, and the $30 million to $50 million it will cost the plastics industry to launch a full-fledged campaign in 2016 will be proven to be an act of political malpractice, particularly since nearly half the state will no longer have plastic bags by election day.”

But the plastics industry and bag manufacturers see things quite differently. The American Progressive Bag Alliance submitted more than 800,000 signatures to qualify the referendum. After sampling the signatures, election officials determined the organization had at least 110 percent of the 504,760 signatures needed to qualify.

After losing CEQA objections in the courts and failing to stop local bans, the plastics manufacturers and the bag makers switched tactics and aimed their attacks at the concept of setting fees on carryout paper bags.
Another organization involved in the controversy, the American Progessive Bag Alliance (APBA), and its allies that are trying to spike the statewide ban by saying the referendum will give voters a chance to cast ballots on what they term a bad law, one that they say would cost 2,000 local manufacturing jobs. Lee Califf, executive director of the ABPA has said SB 270 “would funnel obscene profits to big grocers without any money going to a public purpose or environmental initiatives.”

That reference to “obscene profits” refers to the collection of the small fee for a bag that shoppers would have to buy at the checkout counter if they had no bag and needed one. The attack makes it seem as if the ban is designed to generate a cash windfall for retailers and grocers. Proponents of the bag bans always have intended for the fee to act as a deterrent, not as a revenue stream. If shoppers bring in their own reusable bags, say proponents, no cash needs to be exchanged for bags, and no “obscene profits” come into the picture.

At one time bag ban opponents pushed for more robust recycling measures, which resulted in shoppers able to return single-use bags to stores, where the bags could be collected.
But the strategy has not worked, say proponents of single-use bag bans. Despite the statewide program to collect and recycle the single-use bags, only a small single-digit percentage end up in the recycling stream.

The rest end up blowing in the wind or buried (in a best-case but undesirable scenario) in a landfill.
“Single-use plastic shopping bags pose a costly burden on our environment and our economy,” says Murray of CVBP. “After listening to the public, hundreds of local elected officials, the state Legislature and the governor have moved to eliminate plastic bags. Virtually all of the plastic bags sold in California are produced by just three out-of-state corporations.”

Pacific Sun
The Pacific Sun publishes every Wednesday, delivering 21,000 copies to 520 locations throughout Marin County.
Previous articleHero and Zero: An abalone dinner and a macho biker confrontation
Next articleLetter: ‘You should be far more careful in verifying claims…”