To the North Pole, that is. 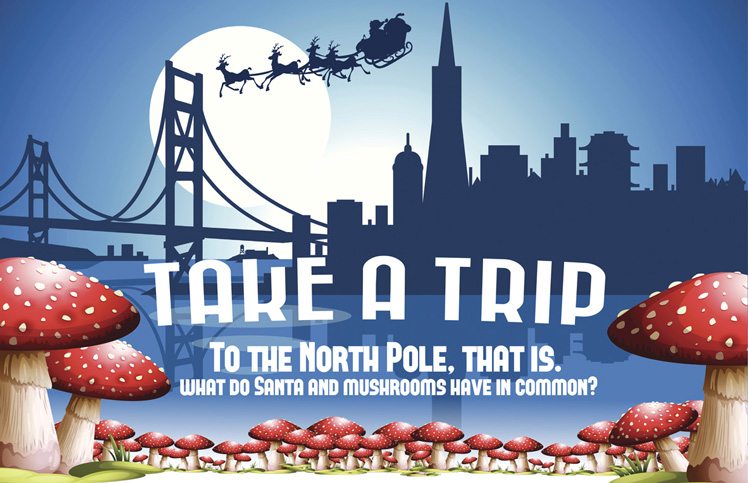 Christmas is upon us. It is time once again for sacred seasonal rituals to be observed.

And once again, I’m on the case.

“Excuse me,” I cut in, interrupting a conversation between an elderly woman in a business suit and a man with a floppy brown hat made of hemp, with a number of pigeon feathers protruding from the mottled hatband, which appears to be snakeskin, but on closer inspection might just be a photograph of snakeskin, cut from a magazine and trimmed into hatband shape—which would explain the staples. “Would you mind,” I continued, “if I asked a few questions … about, um, Santa Claus?”

It’s a warm October day out beside the lake at the Marin Civic Center, where lunchtime is about to break out at the 25th annual Bioneers Summit Conference, an internationally renowned meeting of minds where progressive thinkers, scientists and artists gather to present images of the future, as inspired by the lessons of nature. This year’s lineup of speakers included Eve Ensler (author of The Vagina Monologues), Terry Tempest Williams (activist, conservationist and author of Refuge: An Unnatural History of Family and Place), author-trickster Caroline Casey (author of Making the Gods Work for You, and the host of the syndicated “Visionary Activist Radio Show” heard on KPFA), and Paul Stamets, an expert on mushrooms and why cultivating them will possibly save the human race.

The purpose of the Bioneers Conference, established by Kenny Ausubel and Nina Simons, is to start conversations that might lead to the protection of the planet and the continuance of the human race.

I am here today to ask participants about the day they stopped believing in Santa Claus.

Years ago, on a whim, I asked a filmmaker if he ever believed in Santa, and his story—in which his 5-year-old self spied a Salvation Army Santa tossing back whiskey shots in a Boston bar he happened to be passing by—convinced me that in Western culture, for good or bad, the shared experience of losing faith in Santa makes for some fascinating stories, often funny, sometimes heartbreaking.

This year, I’ve decided to ask the question at one of the largest annual assemblies of brilliant and out-of-box thinkers in the world. In between the morning lecture sessions in the main hall and the numerous workshops held in the afternoon, I’m wandering the outdoor picnic area, looking for people willing to talk about Santa Claus.

“Who says there isn’t any Santa Claus?” asks the gentleman in the hemp hat, who prefers to remain Anonymous (“With a capital A,” he says). “Santa Claus is real. Totally real. You just have to know how to look for him.”

Asked if there was ever a moment, as a child, when he doubted the reality of Santa, Mr. Hemp Hat laughs. “Of course there was. But I got over it.”

“I have a different view of Santa,” says the woman-in-the-suit, who gives her name as Grandmother. “I grew up believing in Santa Claus, but when I was 7, my mother told me that Santa was the patriarchal appropriation of the Earth Mother. Gaia is the giver of life, the ultimate gift. So the patriarchy stole the idea of her bringing the gifts of grain and fruit, and turned her into Santa Claus.

“So, when I had children,” she concludes, “we always had a tree, but the gifts my children received were always from ‘The Mother.’ I let them decide for themselves if they were from me, or the Mother Earth.”

“So,” I ask, having confirmed that her children have children, “when you give gifts to your grandkids … ?”

“The note says, ‘From The Grandmother,’ yes,” she says with a smile.

Near the edge of the picnic area, where a small city of booths have been erected to sell an abundance of organic products and offer information about creative and progressive institutions and organizations, Raines Cohen, a top hat on his head, sits beneath a banner proclaiming “The Conscious Elders Network.”

“I grew up in a Jewish household,” Cohen says, “but when I was 4 years old or so, my parents entered me in a contest, where I ended up winning a St. Bernard … for Christmas. It was a writing contest. I won, so we went down to the Prudential Insurance Company to collect my St. Bernard, just before Christmas.

“I knew about Santa Claus, of course. I understood him to be part of the cultural story that surrounded me,” Cohen continues. “And when we came to get the dog, people kept bringing up Santa Claus, asking me if I was happy that Santa brought me a new St. Bernard. So I had to keep repeating, ‘No, I’m Jewish. We don’t actually believe in Santa Claus—but I am grateful to the Prudential Insurance Company.’ It was just another one of those strange things about the world that doesn’t seem to make sense to a kid, but is clearly part of the surrounding zeitgeist.”

And so it goes.

Halfway through lunchtime, as I make my way across the umbrella-festooned picnic area, I hear a deep, instantly recognizable voice. It’s Caroline Casey (www.coyotenetworknews.com), whose wholly unique radio program is dedicated, according to the bio on her website, “To anything we need to know to have a democracy.”

Upon hearing my “Santa” question, Casey invites me to join her at the table, where she enthusiastically related a recent factoid she’d picked up connecting St. Nick to hallucinogenic mushrooms.

“I seriously heard this amazing story from a mycologist,” she says, “in which our belief in Santa can be traced back to the Amanita mushroom.”

“Um … ” I remark, clearly having not expected that.

“I’m totally serious,” Casey says with a laugh. “Ready for this? Here we go.

“In the north, where the shaman is the spiritual teacher, the Amanita mushroom grows beneath the pine trees. It’s a sacred thing, a sacrament. And according to tradition, the wild reindeer eat the mushrooms, and then the shamans drink the reindeer piss—because the reindeer’s digestive process filters out the dangerous alkaloids in the mushrooms. After drinking the piss, they report experiences of flying … flying with the reindeer, and they almost always end up flying to the North Pole.”

“I know right?” she says. “And from the Pole, the shaman draws the ancient wisdom, which they then take back to the people, and they bring it right into their houses, carrying the ancient wisdom from the Pole down through the chimney. It sounds cranky, but once you allow yourself to tap into this ancient narrative …  it starts to make a wacky kind of sense.”

The sounds of music erupt from a nearby stage, where a “sustainable design fashion show” is about to take place. Just past the stage is an enormous pod-like structure on wheels, into which willing participants can climb, and be subjected to a series of lights and sounds that elicit a sensory experience suggested to be intensely spiritual and transformative.

“So it amuses me,” Casey continues, “whenever I drive around at the holidays and see all of these Santa Claus images everywhere. I think to myself, ‘Look! Everyone is worshiping the ancient sacred Amanita mushroom sacrament!’ And if you look at old German Christmas cards, you’ll see these little paintings of Amanita mushrooms everywhere, under Christmas trees! It’s so cool!

“And when the crazy dingbat woman from Nevada was announcing her candidacy, she put out this folksy commercial. And in the back of her kitchen were these canisters with little Amanita mushrooms on them! And I watched it going, ‘Look! It’s everywhere! The Santa Claus mushroom!’ Christmas is actually a festival honoring the hallucinogenic mushroom! That’s adorable!”

Santa? Hallucinations? Um, that would explain the elves.

The mycologist who first introduced Casey to the “Santa mushroom” idea was the late ethno-mycologist and author James Arthur (Mushrooms and Mankind: The Impact of Mushrooms on Human Consciousness and Religion), who she interviewed on her show several years ago, after which the two had coffee and visited a local bookstore.

“He was searching through these old books,” she recalls, “and he suddenly said, ‘Look at this!’ It was a book of photos of old stained-glass windows. ‘Look at all the mushrooms!’ In all of these ancient pictures of religious iconography, the mushroom was everywhere!

“And Santa—the famous Santa from the Coke commercials, the one with the wink—well, James says, ‘It’s Odin, the Norse God, from the land of the reindeer and shamans—who has one eye!’ So Santa’s famous wink, even though it’s been corrupted by commercialism, is actually a sacred ancient image! How cool is that? It’s clear that our indigenous selves desire and crave a sacrament of kinship and wisdom. Imagine the world if Santa brought wisdom down the chimney instead of crap from Target and Walmart.”

“It makes a person wonder if they should be leaving mushrooms for Santa instead of milk and cookies,” I remark.

“I never left cookies for Santa,” Casey admits. “I always left graham crackers with butter. That’s what I left for Santa every Christmas Eve. And they were always gone in the morning.

“At some point, I think I did realize that my Scottish nurse was eating the crackers,” she says with a laugh, “but it didn’t destroy the magic for me. I assumed she was just an agent of Santa. Why not? If Santa is the ancient spirit of nature, the spirit of endless generosity and magic—aren’t we all agents of Santa?

As the tables around us begin to clear, with people heading off to the afternoon workshops of their choice, Casey admits that, for her, the loss of Santa was a positive thing.

“The loss of Santa,” she says, “is the beginning of wisdom. It’s the moment we realize that the responsibility of bringing magic and wonder to the world doesn’t just belong to Santa Claus.

Previous ArticleFeature: Yet another movie

Next ArticleFood & Drink: Holiday in the ‘Sun’