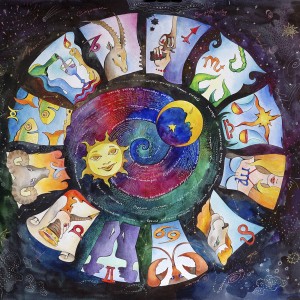 ARIES (March 21–April 19) In Alice’s Adventures in Wonderland, our heroine encounters a talking caterpillar as he smokes a hookah on top of a tall mushroom. “Who are you?” he asks her. Alice is honest: “I know who I was when I got up this morning, but I think I must have been changed several times since then.” She says this with uneasiness. In the last few hours, she has twice been shrunken down to a tiny size and twice grown as big as a giant. All these transformations have unnerved her. In contrast to Alice, I’m hoping you’ll have a positive attitude about your upcoming shifts and mutations, Aries. From what I can tell, your journey through the Season of Metamorphosis should be mostly fun and educational.

TAURUS (April 20–May 20) Juan Villarino has hitchhiked over 2,350 times in 90 countries. His free rides have carried him over 100,000 miles. He has kept detailed records, so he’s able to say with confidence that Iraq is the best place to catch a lift. Average wait time there is seven minutes. Jordan and Romania are good, too, with 9- and 12-minute waits, respectively. In telling you about his success, I don’t mean to suggest that now is a favorable time to hitchhike. But I do want you to know that the coming weeks will be prime time to solicit favors, garner gifts and make yourself available for metaphorical equivalents of free rides. You’re extra magnetic and attractive. How could anyone could resist providing you with the blessings you need and deserve?

GEMINI (May 21–June 20)  One of the big stories of 2018 concerns your effort to escape from a star-crossed trick of fate—to fix a long-running tweak that has subtly undermined your lust for life. How successful will you be in this heroic quest? That will hinge in part on your faith in the new power you’ve been developing. Another factor that will determine the outcome is your ability to identify and gain access to a resource that is virtually magical even though it appears nondescript. I bring this to your attention, Gemini, because I suspect that a key plot twist in this story will soon unfold.

CANCER (June 21–July 22)  Potential new allies are seeking entrance to your domain. Existing allies aspire to be closer to you. I’m worried you may be a bit overwhelmed; that you might not exercise sufficient discrimination. I therefore urge you to ask yourself these questions about each candidate. 1. Does this person understand what it means to respect your boundaries? 2. What are his or her motivations for wanting contact with you? 3. Do you truly value and need the gifts each person has to give you? 4. Everyone in the world has a dark side. Can you intuit the nature of each person’s dark side? Is it tolerable? Is it interesting?

LEO (July 23–August 22)  While a young man, the future Roman leader Julius Caesar was kidnapped by Sicilian pirates. They proposed a ransom of 620 kilograms of silver. Caesar was incensed at the small size of the ransom—he believed he was worth more—and demanded that his captors raise the sum to 1,550 kilograms. I’d love to see you unleash that kind of bravado in the coming weeks, Leo—preferably without getting yourself kidnapped. In my opinion, it’s crucial that you know how valuable you are, and make sure everyone else knows, as well.

VIRGO (August 23–September 22)  Romanian philosopher Emil Cioran loved the music of Johann Sebastian Bach. “Without Bach, God would be a complete second-rate figure,” he testified, adding, “Bach’s music is the only argument proving the creation of the universe cannot be regarded as a complete failure.” I invite you to emulate Cioran’s passionate clarity, Virgo. From an astrological perspective, now is an excellent time to identify people and things that consistently invigorate your excitement about your destiny. Maybe you have just one shining exemplar, like Cioran, or maybe you have more. Home in on the phenomena that in your mind embody the glory of creation.

LIBRA (September 23–October 22)  I foresee the withering of a hope or the disappearance of a prop or the loss of leverage. This ending may initially make you feel melancholy, but I bet it will ultimately prove beneficent—and maybe lead you to resources that were previously unavailable. Here are rituals you could perform that may help you catalyze the specific kind of relief and release you need: 1. Wander around a graveyard and sing songs you love. 2. Tie one end of a string around your ankle and the other end around an object that symbolizes an influence you want to banish from your life. Then cut the string and bury the object. 3. Say this 10 times: “The end makes the beginning possible.”

SCORPIO (October 23–November 21)  “If a man treats a life artistically, his brain is his heart,” wrote Oscar Wilde. I’ll translate that into a more complete version: “If a person of any gender treats life artistically, their brain is their heart.” This truth will be especially applicable for you in the coming weeks. You’ll be wise to treat your life artistically. You’ll thrive by using your heart as your brain. So I advise you to wield your intelligence with love. Understand that your most incisive insights will come when you’re feeling empathy and seeking intimacy. As you crystallize clear visions about the future, make sure they are generously suffused with ideas about how you and your people can enhance your joie de vivre.

SAGITTARIUS (November 22–December 21)  “My tastes are simple,” testified Sagittarian politician Winston Churchill. “I am easily satisfied with the best.” I propose that we make that your motto for now. While it may not be a sound idea to demand only the finest of everything all the time, I think it will be wise for you to do so during the next three weeks. You will have a mandate to resist trifles and insist on excellence. Luckily, this should motivate you to raise your own standards and expect the very best from yourself.

CAPRICORN (December 22–January 19)  Russian playwright Anton Chekhov articulated a principle he felt was essential to telling a good story: If you say early in your tale that there’s a rifle hanging on the wall, that rifle must eventually be used. “If it’s not going to be fired, it shouldn’t be hanging there,” declared Chekhov. We might wish that real life unfolded with such clear dramatic purpose. To have our future so well-foreshadowed would make it easier to plan our actions. But that’s not often the case. Many elements pop up in our personal stories that ultimately serve no purpose. Except now, that is, for you Capricorns. I suspect that in the next six weeks, plot twists will be telegraphed in advance.

AQUARIUS (January 20–February 18)  Would it be fun to roast marshmallows on long sticks over scorching volcanic vents? I suppose. Would it be safe? No! Aside from the possibility that you could get burned, the sulfuric acid in the vapors would make the cooked marshmallows taste terrible and might cause them to explode. So I advise you to refrain from adventures like that. On the other hand, I will love it if you cultivate a playful spirit as you contemplate serious decisions. I’m in favor of you keeping a blithe attitude as you navigate your way through tricky maneuvers. I hope you’ll be jaunty in the midst of rumbling commotions.

PISCES (February 19–March 20)  People will be thinking about you more than usual, and with greater intensity. Allies and acquaintances will be revising their opinions and understandings about you, mostly in favorable ways, although not always. Loved ones and not-so-loved ones will also be reworking their images of you, coming to altered conclusions about what you mean to them and what your purpose is. Given these developments, I suggest that you be proactive about expressing your best intentions and displaying your finest attributes. 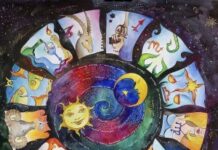