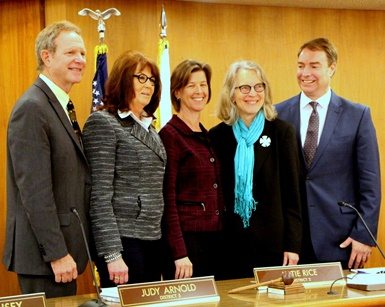 Katie Rice named President of Board for Marin County Supes

With the start of a new year comes a fresh start for the Marin County Board of Supervisors. Katie Rice, District 2 Supervisor, was named President of the Board, succeeding Kate Sears of District 3. Representing the upper and lower Ross Valley areas, downtown San Rafael and part of Larkspur, Rice is serving as President for the first time since joining the Board in October of 2012.

District 1’s Damon Connolly was sworn in as a new member of the board. Previously serving on the San Rafael City Council, Connolly, an attorney, was elected in June to represent Terra Linda, Lucas Valley, Marinwood, Santa Venetia, Peacock Gap, Glenwood and Sun Valley neighborhoods of San Rafael.

In other changes, District 4 Supervisor Steve Kinsey was voted First Vice President of the Board, and District 5 Supervisor Judy Arnold was voted Second Vice President. Representing most of Novato, Arnold took the oath for her third term, after her re-election in June.