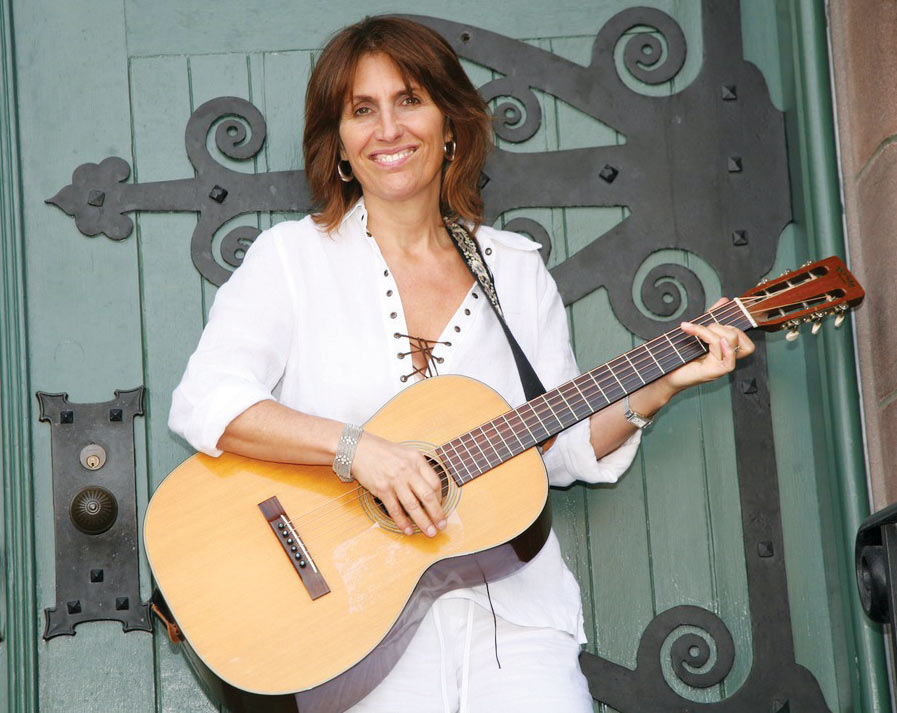 Fairfax’s Liz Stires is teaching the world to sing

It has happened to legions of us, and it’s one of the many reasons our culture no longer sings for the sheer joy of it.

Maybe it was in a middle school choir class, or perhaps a parent informed us at an early age that we were tone deaf and couldn’t carry a tune, or it might have just been self-consciousness born from the belief that our voices would never be as good as our favorite pop stars. As a result, we stopped singing—paralyzed by the fear of judgment and criticism, even in the privacy of our own homes.

“I strongly believe that everyone can sing,” says Fairfax-based singer, songwriter and vocal coach Liz Stires, who grew up in a musical family in Mill Valley and spent her 20s playing guitar and singing in local Marin bands. I sat down with her to learn about her notable career and discover what she is doing to change our collective resistance to the sound of our own voices.

Pacific Sun: It must have been an interesting time growing up in Mill Valley in the ’60s and ’70s.

Liz Stires: It was! My mom opened an espresso bar and art gallery in 1960 on Madrona called the Gallery that was right up the street from the old Sweetwater. She had art exhibits, chess games and folk music at night. She met my stepfather there, who owned the Creative Music School and taught guitar lessons to local kids and adults including John Cipollina from Quicksilver Messenger Service.

When did you start playing guitar and singing?

By high school, I had developed some skill as a guitar player, and I started writing songs when I was 15. A few years later, I had my first gig on Mt. Tam at the amphitheater with my sister performing songs we had written. We also formed a band with my brother called the Cascades—because we grew up on Cascade Drive—and began performing at Rancho Nicasio, the Re-Union and the Bolinas Community Center.

How did you end up singing with Huey Lewis?

I had known Huey since I was a kid. His younger brother was a drummer in my brother’s high school band. The shows with Huey were mostly at Uncle Charlie’s (a club in Corte Madera), and were produced by a young production company called Marin County Homegrown. It was the beginning of the Huey Lewis & the News that started out as American Express.

You also sang backup for the Jerry Garcia Band?

When I was asked to sing backup with JGB I was thrilled. JGB covered lots of Motown and music that I loved. Garcia was a very humble, kind and brilliant player, and a sort of magical person. It was a highlight of my life being onstage with him. He asked us—myself included—if I had any original songs I wanted to bring in for the band. During the decade I was pursuing music, Jerry treated me as someone who had musical merit worth noting.

What made you shift from performing to teaching?

I thought that if you didn’t make it by the time you were 30, that it was all over. So I went back to college and got a degree in psychology and worked in nonprofits working with low-income women and families. I also became interested in brain therapy and the healing effects of music. I first started teaching band camps for some of my son’s classmates. I loved vocal arranging and it came very naturally to me, so I started teaching harmony to my students and eventually started working with singers, songwriters and players.

Tell me about your harmony groups and how they started?

I initially started with younger students, but there was a strong interest from adults so I began working with groups of women, friends and families. It struck me that after class each week, six to eight women would stand outside my house and laugh and talk for an hour—even the ones who didn’t know each other. They would tell me that singing with each other was the highlight of their week.

Did you encounter any particular hurdles or resistance in offering these harmony groups?

My younger students would come to my class with stories about American Idol and The Voice. I noticed that most of the teen singers started emulating the same three to four stars, and it became clear that the message out there was that to sing you needed to sound exactly like these few stars. This angered me, as I felt musicians have already been bankrupted by an industry that doesn’t provide a living for artists and doesn’t value diversity, and now the very same business has taken away music from everyone, creating an even bigger wall between people and their innate abilities and their right to enjoy singing.

As a musician, teacher and lover of all things music, can you offer some tools to help us raise our voices once again without fear?

I recommend that families put together a songbook that they can sing together. Make music a tradition in your family. Find friends who love to sing and get some help creating and learning songs that touch you, make you happy and fill your heart. I use the oral tradition and arrange lots of music in a variety of genres that I pre-record and then send out to my students in recording files. Mostly they can practice on their own and in the car and then come in and sing harmony relatively quickly. Singing harmony is a super exhilarating experience. Most people think they can’t ever do that, so giving people the experience of singing in three-part harmony has been a highlight of my life.

To join a harmony class or learn more about Liz Stires, check out her website, lizstires.com.