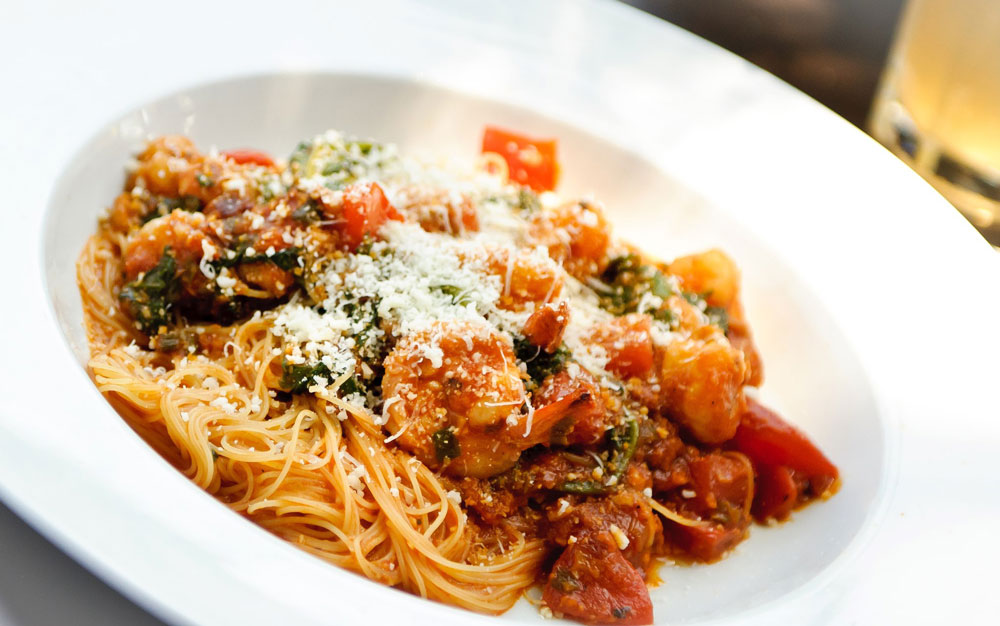 Most restaurants don’t even make it past the first year. Il Davide has beaten those odds by a long shot.

Chef/owner David Haydon, 58, has proudly run his San Rafael Italian restaurant since 1995. And it’s only getting better.

“The secret?” he said. “Consistency. You need good food and then you need to make it consistently. You don’t want to come to a restaurant you love and then have your food be different each time you come.”

For example, his pasta maker has been making pasta for years and has become a master of his craft.

Haydon’s niche is taking classic dishes and playing with them—except for veal piccata.

“You just can’t tweak that,” he said.

Take for example David’s version of Chicken Parmesan. He fries organic chicken breast and seasons it with toasted pumpkin seeds, panko, cayenne and then serves the dish in a bowl with kale, basil, mozzarella and torchio pasta. “It’s spicy and sweet and crunchy,” he explained.

Il Davide also plays with another slightly tweaked classic dish: A garlic-infused mushroom leek tart. The crust is sweet, not savory. And it came about because one of his cooks accidentally used sugar one time instead of salt. “But it was really good,” he recalled. “And I kept it like that. It’s absolutely delicious.”

Speaking of staff, that’s Il Davide’s other secret to success. The people who have worked with David have been with him for years, if not decades.

“We really give everything the personal touch,” he said. “I never wanted to be a corporate restaurant. Our staff has fun. We have this good energy and vibe.”

“One guy comes in here every day,” David said. “Every single day. He gets to-go food and has a drink at the wine bar. Another lady buys enough food to last her through the Monday that we’re closed.”

And during the pandemic, when the restaurant was closed for a few months and then started offering take-out only, David said his customers stepped up to show their love.

One man left a $2,000 tip when he ordered his to-go food, which he wanted to be shared among the employees. Other people left $100 tips like it was nothing.

David is likely so loved because he gives back to the community that he lives in and cares about. He is a regular contributor to local schools and churches, donating his meals for good causes. Two of his biggest recipients are San Rafael High School, where all three of his stepchildren attended, and 100Marin, a group of philanthropists who raise money for other Marin County nonprofits. In fact, his efforts won him San Rafael Citizen of the Year in 2016.

During his off hours, he can often be found hiking in the hills above Terra Linda, skiing in Tahoe or working out in his tricked-out gym at his San Rafael home, which he shares with his wife, Ellen Haydon, who used to work with him catering weddings before she became a nurse.

David’s love of cooking came to him when he was 15. He started a job as a dishwasher at a restaurant his friend’s father owned. And he quickly got hooked on the adrenaline rush of creating 200 meals all at once. “I found that fascinating,” he said.

It also didn’t hurt that neither his mother nor his father cooked very well. (His father “murdered” steaks, David recalled.) And he wanted to be able to eat good food. So he learned himself.

As David looks back on his three decades of serving that good food, he’s got no regrets.

“A lot of restaurants are really good but we’re on people’s minds,” he said. “We are so established. When you think Italian, you think us.”

Next ArticleBolinas Residents Struggle as Rentals Are Converted to Vacation Homes