.Feature: Hot on the Trail

The Bay Trail to connect Marin with neighboring counties — does ABAG have an ulterior motive? 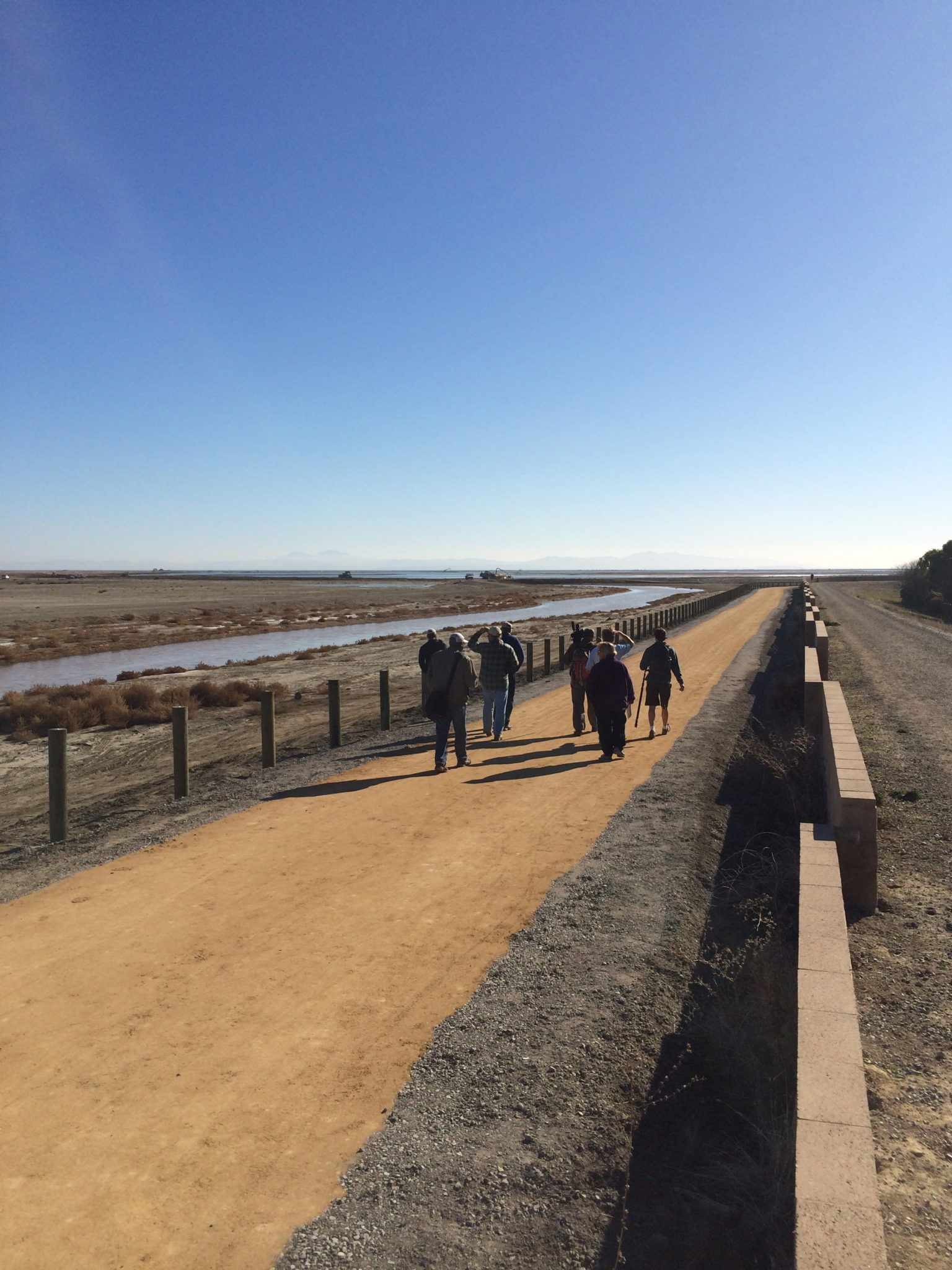 The team, comprised of a dozen 18- to 24-year-olds from across the country, planted 11,000 plants. Everyone on the team knew they were helping to create a large and functional seasonal wetland.

Restoring the wetlands at Hamilton is part of a larger plan to restore wetlands around San Francisco and San Pablo bays. Wetlands can provide one of the first lines of defense for shoreline communities facing the challenge of sea-level rise. Restoring wetlands accomplishes a multi-part benefit: It improves the natural environment; it improves the visual impact of the wetlands and shoreline; it keeps tidal surge at bay, to an extent.

A segment of the Bay Trail includes a two-mile portion at Hamilton. The segment, which officially opened in the summer, offers Bay Trail travelers a look at the former airfield as well as the wetlands restoration and San Pablo Bay. The Hamilton segment also provides a look back in history to a time when the Bay Area—and Marin—played a role in protecting the safety of the nation.

Maureen Gaffney is a Bay Trail planner at the Association of Bay Area Governments (ABAG). Here are her impressions of the trail at Hamilton, along with information about a new audio tour that can be heard on iPhones and Android devices:

“The first time I heard the pitch for the smartphone app that talks while you walk, I was skeptical. In fact I believe the notion was greeted with a small snort and an eye-roll. Who wants to be squinting into their phone on a blissful Bay Trail stroll? The San Francisco Bay Trail is an ambitious plan—a 500-mile walking and cycling path around the entire San Francisco Bay, running through nine counties and 47 cities. With 340 miles in place, the trail was rightly described in the San Francisco Chronicle as “an unofficial national park—right in the midst of the nation’s fifth-biggest urban area.”

“Point” by Canogle is a new smartphone app enabled by GPS that seamlessly provides narrated content as you make your way down the trail. “It’s like having your own pocket storyteller!” says Doug McConnell of Bay Area Backroads fame. Bay Area Backroads was the small-town-feel and much-beloved television show that ran from 1993 to 2009, leading viewers to many hidden gems in the Bay Area. McConnell is now the welcoming voice of the Bay Trail smartphone app. With grant funds from the California State Coastal Conservancy, the San Francisco Bay Trail Project has created curated content for four parts of the trail: Richmond, Alviso, American Canyon and two segments at Hamilton.

The two segments of the Hamilton walking tour give Bay Trail travelers a chance to take in the natural environment as well as the historical significance of Hamilton.

About the Hamilton walk, Gaffney writes, “This former Army Airfield and Air Force base has been transformed radically over the past decade. McConnell weaves the fascinating story of the efforts to restore these 648 acres of thick concrete runways and abandoned structures into something approximating their original status as marsh and wetlands, supporting hundreds of species of fish, fowl and wildlife. Though the levee separating San Francisco Bay from this former airfield was only recently breached, fleets of white pelicans, sandpipers, avocets and a pair of mute swans now grace the landscape. As I took this in, my pocket tour guide [wove] a tale for me. During the Cuban Missile Crisis in 1962, ‘the flight crews at Hamilton Field and the Nike Missiles in the hills of Marin County were on the highest stages of alert … for several perilous weeks.’ As I watched a thousand birds wheel through the sky in front of me, I pictured young airmen sitting in their jets on the tarmac, engines running, ready to take to the skies for a much different purpose.”

The San Francisco Bay Trail Project, which is administered by the ABAG, will be a 500-mile circular route when all connections are complete, but as Gaffney says, it’s never really complete—at least for a while. A large part of the work-in-progress status comes because planners continually seek to realign the trail for a better experience. And as roads and the built environment change (as well as environmental restoration in some areas), the route of the trail accommodates.

But the overall concept remains the same: A trail that follows the circumference of San Francisco and San Pablo bays, providing a rim around the Bay Area. Spoke paths, trails and routes get added to the rim as they become possible, creating a transportation infrastructure for walkers and bike-riders who can enter the system from communities around the bays and then travel along the shoreline.

The Bay Trail is not a mere recreational add-on to the Bay Area’s playful nature and connection to the environment. It’s also meant to be a utilitarian route that can serve as a safe path for children and adults on bikes and on foot. The rules of the path, says Gaffney, are up to the individual communities the path traverses. That has played a role when a bicyclist struck a child on the Mill Valley-Sausalito multi-use segment and talk started about reducing the speed limit from 15 miles per hour to 10 miles per hour.

In addition to providing a recreational outlet for exercise and a utilitarian path to connect travelers to schools and work and transit, the Bay Trail also serves as a link connecting neighborhoods, points of interest and destinations such as beaches, fishing piers, boat launches and more than 130 parks and wildlife preserves totaling 57,000 acres of open space.

Completion of the Bay Trail has come a long way since the project started. It celebrated its 25th anniversary in 2014 with major accomplishments, such as the Hamilton segments, and also some sobering realizations that much still needs to be accomplished.

As of 2013, the state had contributed about $20 million in state bond funding for Bay Trail projects. Bay Trail planners and administrators used that money as leverage—more than $64 million since 1999. The funds generated went toward creating more than 60 miles of new trail construction and what planners call “project specific” planning for more than 130 miles of trail.

In Marin in 2013, dozens of gaps still existed and continue to exist. The gaps include what will one day become 43 more miles of trail, which are estimated to cost about $36 million.

The Bay Trail became inextricably linked, at least in concept and intention, with the Recovery Plan for Tidal Marsh Ecosystems of Northern and Central California.

The plan envisions a recovery effort that will last 50 years. That might seem like a long time, but the shorelines of San Francisco and San Pablo bays have a long way to go to recover from development and environmental pressure that stretches back about 150 years. Only about 8 percent (16,000 acres) remain of ancient marshland that totaled about 190,000 acres along the bay. But when counting the number of acres of tidal marshes, it’s critical to understand the concept of ancient marshes and “modern marshes,” areas that actually increased because of human influence. When the combination of ancient marshes and human-influenced marshes are combined, the number of remaining tidal marsh acreage still is a mere hint of what once ringed the bay.

The Tidal Marsh Recovery Plan seeks to use a variety of tactics. It hinges on volunteer efforts as well as support from various government agencies, from the federal level right down to local jurisdictions. In addition to calling for the creation of new wetlands, the plan also calls for continual research to stay attuned with changing environmental theories. Along the way, as theories alter, the plan can accommodate new thinking. The plan envisions an education component to attract the public—and a trapping program to relocate feral cats and non-native red foxes.

The recovery plan encompasses tidal marshes ranging from Humboldt Bay to Morro Bay, although areas in San Francisco Bay receive special attention. Richardson Bay, Bolinas Lagoon, Tomales Bay and areas in the Point Reyes National Seashore are also included in the recovery plan. All are critical habitats in the Pacific Flyway. The recovery plan is the second largest tidal marsh restoration and protection effort in the country, second only to the restoration of the Florida Everglades.

Many programs and projects are folded into the recovery plan. The state Coastal Conservancy, for example, worked on the major project at Hamilton. That project also incudes an area at Bel Marin Keys. In the South Bay, a massive project to reclaim salt ponds is underway, and restoration of tidal marsh at Crissy Field has achieved success. Those individual projects and many others that ring San Francisco, San Pablo and Suisun bays all represent key links in a chain. The ultimate goal of the South Bay Salt Pond Restoration Project is a contiguous strip of tidal marsh along the entire shoreline in the Bay Area. That’s also a central goal for other segments of the restoration project. In some areas there’s development right up to the bay, but it’s part of the plan to have as much of a strip of tidal marsh as possible. The Bay Trail can sometimes act as a non-motorized-vehicle and pedestrian buffer between restored wetlands and the automated communities inland.

That’s important because unless species can roam in a marsh environment, they become isolated in what amounts to an isolated ecological zoo.

SB 100, authored by then-Senator Bill Lockyer directed that ABAG should create a “ring around the bay.” The bill passed in 1987. Two years later, ABAG adopted a set of policies and alignments for the first incarnation of the Bay Trail.

The first policy in the document states, “In developing the trail alignment, attention was focused on providing a realistic route for trail development, consistent with the need to balance the constraints posed by the different natural and built environments around the bay. Use of the spine and spur trail system provides the means to accomplish this goal.”

On the Bay Trail website, a number of benefits that the Bay Area bestows are listed. The last benefit on the list: “Finally, by linking all nine Bay Area counties and 47 cities, the Bay Trail reminds us of our shared connection to San Francisco Bay and reinforces the Bay Area’s growing sense of regionalism.”

That may inflame those who reject regionalism and regional planning, or at least the acceptance of a sense of regional identity. It also may spark conspiracy theories among those who believe ABAG’s real goal is to homogenize the Bay Area—including Marin.

But using a bit of twist of a saying from a famous Republican conservative, it can be said that a defense of ABAG in the creation of the Bay Trail is no vice.

Next ArticleLetter: ‘The weather is not so muggy …’