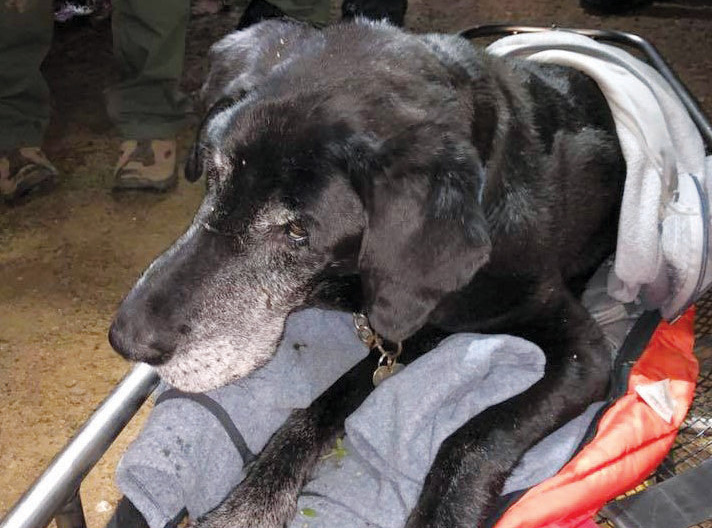 Marin County Search and Rescue (SAR) recently rescued a senior dog and his person from the bottom of a steep embankment. The saga began when Shadow, a 14-year-old Labrador retriever, went missing from the trails near Dias Ridge on Mount Tamalpais. Though his owner, a 55-year-old man, combed the expanse for him, it took more than two days to locate the pup.

Finally, late on Sunday afternoon, he heard barking from far below the trail, followed the sound and found Shadow immobile in a drainage area. He made his way down to him, but unable to get the pooch or himself back up the slope, he dialed 911 for help. The first responders were park rangers and Marin County firefighters who, after assessing the situation, called in SAR, an all-volunteer team comprising youth and adults. Search and Rescue members started arriving around 7pm, in the complete darkness, and established voice contact with the man.

“It’s amazing to me that he found the dog. The hill is covered with dense manzanita, hip-high,” said SAR administrative director Molly Williams.

The shrubbery was so thick it took 45 minutes for the crew to reach the pair. They provided food and water to both and then began the task of figuring out the best way to get everyone back to the trail safely. Ultimately, Shadow rode out in a special stretcher and the rest spent the next hour walking up the precipitous slope.

About 30 people worked on the rescue, many of them high school students from SAR. We’re giving a loud shout out to SAR for serving our community and leading more than 50 searches each year.