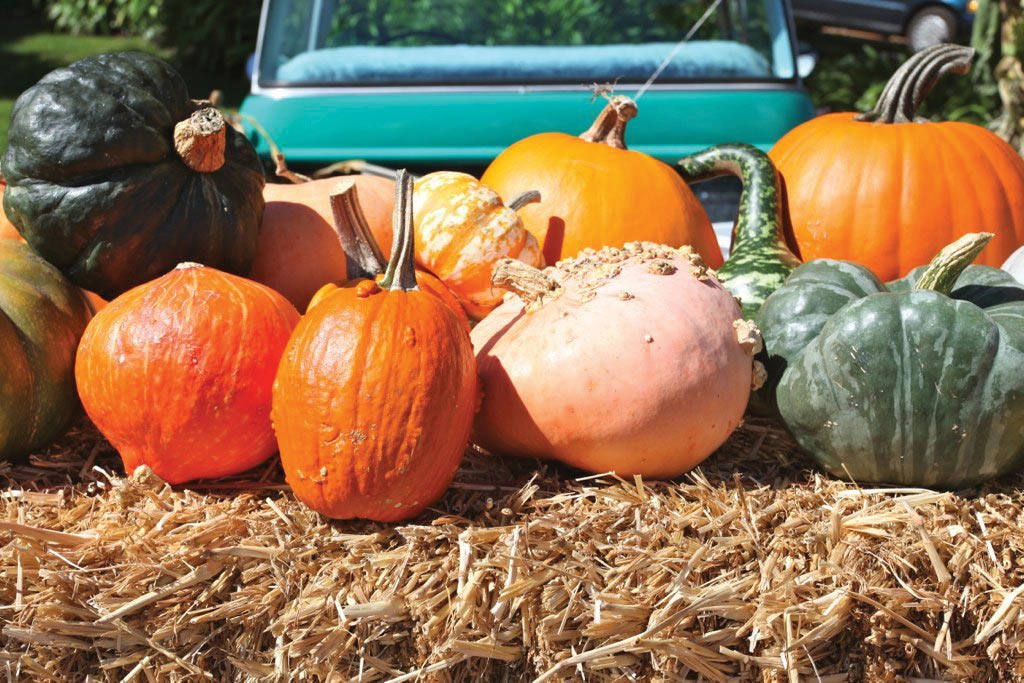 From the ranches and farms of West Marin to the view overlooking the San Francisco Bay, autumn in the North Bay means harvest time, and with harvest time comes harvest fairs, festivals and other events commemorating the region’s rich bounty and range—from family-friendly outings on the farm to Oktoberfest street parties.

A harvest-season town fixture since it debuted in 1970, San Anselmo’s Country Day Fair boasts a colorful history, at least for movie lovers. The popular Star Wars character Boba Fett reportedly made his first public appearance marching in the parade in 1978, long before debuting in 1980’s The Empire Strikes Back. The San Anselmo Historical Museum also notes that Boba Fett marched alongside Darth Vader, and the actor in the Vader suit required medical attention after walking in the extremely hot weather that day.

While San Anselmo Country Fair Day has undergone relocations and sponsorship changes over the years, the fair, which returns this year on Sunday, Sept. 29, remains a showcase of the town’s artisans and business owners. It starts with a pancake breakfast at the San Anselmo firehouse, before a parade down San Anselmo Avenue highlights the day. Booths representing community schools, organizations, shops and more will line the avenue. This year’s event also boasts a Ferris wheel, giant slide and other activities for the kids. The daylong street fair also includes live music, food and other fun for all ages. (Townofsananselmo.org)

With its festive attire, traditional food, giant mugs of beer and overall levity, the German holiday Oktoberfest is one of the most popular autumnal offerings not only in Europe, but in the U.S. as well. Iron Spring Pub & Brewery in Fairfax kickstarts the season Sept. 27–29 with their Oktoberfest Weekend, featuring the release of Iron Springs’ annual Oktoberfest lager and Festbier, both similar brews to what patrons find in the beer halls of Germany’s Oktoberfest headquarters in Munich. These beers match well with Iron Springs’ German menu specials and festive ambiance. (ironspringspub.com)

On Saturday, Oct. 12, one of Marin’s largest celebrations, Oktoberfest Corte Madera, returns to Old Corte Madera Square for its 26th year. The afternoon boasts craft and home brewers, and expands on the German brews with wine, mead, hard ciders and even Kombucha on hand for the curious taster, who can also pick up a commemorative mug for free. The day also includes live music, entertainment for kids and food ranging from old-school sausages, sauerkraut and pretzels, to more exotic offerings from Burmatown and pizza from Stefano’s. Beyond all that, the event’s biggest attraction may be the truckloads of Marin-grown pumpkins sold each year. (Oktoberfestcortemadera.org)

With Marin’s long-celebrated history surrounding cycling and mountain biking, it’s little surprise one of the most popular seasonal events in the county is Biketoberfest, presented by the Marin County Bicycle Coalition and featuring thousands of cycling enthusiasts gathered for an Oktoberfest-style party on Saturday, Oct. 12, in Fairfax.

New this year to Biketoberfest is a spotlight on E-Bikes, a cycling revolution only a hundred years in the making. Indeed, the electronic bicycle patent goes back to the 1890s, though man-power has been the norm for pedal-pusher bikes until recently. Several local vendors will show off the latest in E-bikes at Biketoberfest, with demos and group rides available.

Other group rides at Biketoberfest include a classic Point Reyes Loop on the road by way of Nicasio Reservoir, a gravel ride and a mountain bike loop past some historical sites.

After the ride, the event congregates at Fairfax Plaza for an afternoon of beers, featuring over a dozen Northern California craft brewers and a massive bike expo with over 40 businesses on hand to talk shop. (marinbike.org/biketoberfest)

Up in Novato, the folks at Trek Winery celebrate the grape harvest on Oct. 13 with their fourth annual Downtown Novato Harvest Festival. The event includes wines on hand from Trek and fellow North Marin vineyards Pacheco Ranch Winery and Kendric Vineyards alongside craft beer and food vendors. The family-friendly event welcomes both kids and adults to partake in grape stomping competitions—a must for any harvest party—and live music keeps the good times rolling with sets from popular North Bay bands the Soul Section, the James Harman Band and Blind Date. (Facebook.com/TrekWine)

Overlooking the Marin coastline of Muir Beach, the Fall Harvest Celebration at Slide Ranch, happening on Oct.19, is one of the most picturesque harvest events of the season. It’s also one of the busiest days on the farm, with dozens of farm and animal activities to keep the young ones happy; and farm-fresh food, live music and outdoor fun for adults. Among the farm animals on hand are goats, sheep, chickens and even bees; and newly picked apples are available for cider pressing and caramel dipping. Or, try your hand at making farm-fresh cheese and cooking food straight out of the garden. (Slideranch.org)

Charlie Swanson
Charlie Swanson is a North Bay native and an arts and music writer and editor who has covered the local scene since 2014.
Previous articleAdvice Goddess
Next articleRoad Kings